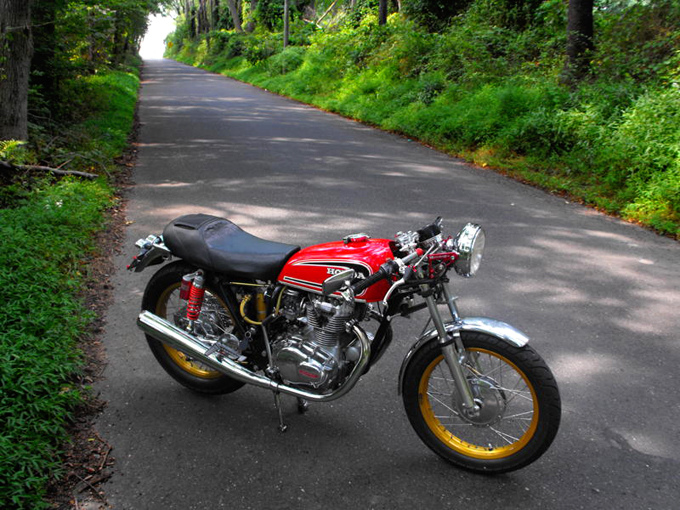 Rick Sanders started searching for a café racer donor bike at the beginning of 2010. “In the early spring I came across this red 1975 Honda CB360T bone stock, decent shape but not running, so on to the trailer it went” said Rick. You see Rick’s usual ride is a BMW R1100, so when he took on this project he wasn’t quite sure how it would turn out. “I’m no mechanic, but I can turn a wrench” he says. “Its amazing what people can create and conceive with motorcycles. Any café bike I was going to build was destined to have clip-ons or clubmans, so that became the starting point. Complete rewire of the front end, removed the gauges, bars, mirrors and turn signals. All that’s left up front is the new headlight and re-designed tach. I wanted drum brakes, so off with the rotors, calipers, hydraulics and levers. Each drum brake has its own custom made brake stops and MSR adjustable levers. Bar-end mirrors and machined aluminum bar plugs finish off the clip-ons.”

Rick had the front fork, engine covers and top fork clamps polished and shaved. Then he sent the rear fender support, kick stand, center stand, swing arm and fender brace off to the chrome shop. The custom anodized gold wheels were built by Buchanan – Sun rims 18 x 3 with SS spokes and nipples on fully polished Honda drums. The battery, tool and air boxes went to the resell pile. Two 32mm KN pod filters take up the space now along with a oil breather/collector system. The seat was rebuilt cafe style, which included an enclosed battery box, twin bob tail lights and rear sets by Raask. Thankfully not everything on the CB360 has been replaced. The tank, frame, engine and exhaust are all from the original bike.

Nearing completion of his project, Rick had one of the toughest tasks ahead of him – choosing a name. “It seems all special bikes bear a name sake” says Rick. “It took 3 months of pondering before the name “Red Bone” came to me during a ride. The year 1975 had many world turning events, but one that hit me was the end of the Vietnam War and I am a Vietnam Vet. I am the first son of an interracial marriage, between a black military solider and a white Canadian nurse, and that took a lot of courage back in 1955 – when America was still pulsing its segregation view points. Many white and black mixed Amerasian children were left behind after the US pulled out of southeast Asia. This not only occurred in Vietnam but in Thailand, Japan, Philippines and Korea. The term “Red Bone” was used to describe racially mixed children ever since the early slave days. Now I’ve built a half breed motorcycle. One half is Isle of Japan – building bikes for the world, and the other half is the Isle of Man – calling and thrashing for the streets of London, Berlin and Amsterdam.”