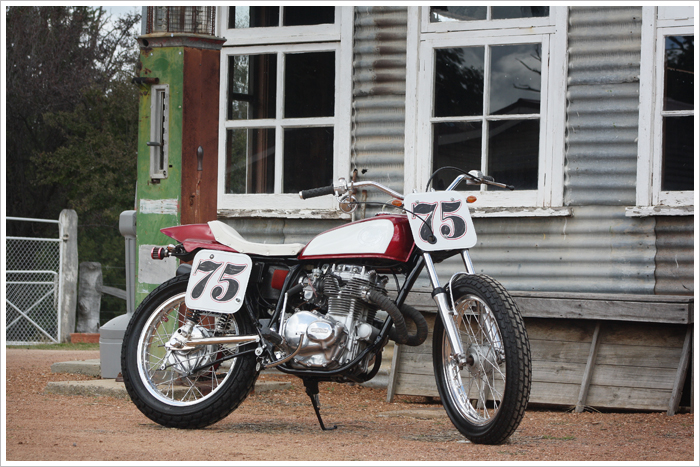 Forty years ago Mark Brelsford was crowned the 1972 AMA Grand National Champion, riding his Harley-Davidson XR750 to victory. Many years later Simon Whittaker from Canberra Australia was flicking through some old motorcycle magazines and stopped on an article. It was a story about the legendary Mark Brelsford and featured some photographs of his Flat Track XR750 in all its glory. Simon had just acquired an old Honda CB360 from an old lady’s back yard and was wondering what to do with his first ground up rebuild. It was a light bulb moment. “I decided to build a XR750 inspired flat tracker” said Simon. “This is the bike that started my 70’s Honda twin obsession”. As the old saying goes, you always remember your first… We’ll pass the moto microphone over to Simon to explain the build. “This was a typical neglected Honda living under a tarp in the owners grandmothers backyard. After a few months of pestering I got it for $500 dollars – probably $400 too much I reckon! First had to get some Dunlop K180 tyres, then some old MX alloy rims from Joes’ wreckers, 19” and 18” to mount them to. EPT chromers polished them up to a mirror finish, and Darryl at Moose racing laced them up to the stock hubs with heavy gauge stainless spokes. The wheels and tyres cost twice as much as the bike! No flat tracker looks the part unless it has an upswept exhaust system and some front and side number plates. Then Simon started work on some fabrication. “Fortunately my mate Craig Crawford owns C&D fabrications and let me use some of their equipment. I cut the standard pipes off about 8 inches down from the outlet, swapped them over and he helped me weld up some bends to get it to come around the left and over the motor. Some old Bub mufflers off a mates Harley were welded to some straights, and I made some spring clips and brackets to hold it all on. Then I began fabricating the number plates from gal sheet and the beading machine for the edges, made mounting brackets for these and a dash for the idiot lights and the headlight just mounts on a stem and plugs into my modified wiring harness. Swap meet handlebars, polished switch blocks, I also made the fork brace from round bar. The fuel tank had to be modified to take the twist on vintage cap I found on ebay. I ordered the XR 750 seat from “Glass from the Past” and had them do the seat cover in white with the snaps for a vintage look. I cut lots of brackets off and added a couple of strengthening tabs in the frame triangle, made seat mounts before assembling everything back together for a ridable mock up”. “The engine was then pulled apart for some new pistons and the head was cleaned up and valves lapped. My Dad gave me a hand to put it all back together. The rear shocks were from Walter at YSS and the only problem I had was when I started putting it all back together, the left hand one wouldn’t fit because it was to wide at the base and touched the chain. This was later fixed by a friend Alex Gibbs who is a talented bus driver with a lathe. To finish, the frame was done in gloss black enamel, the tank and seat was painted in a custom two tone cherry metallic flake and pearl white, by Matt, another bus driver friend. ”