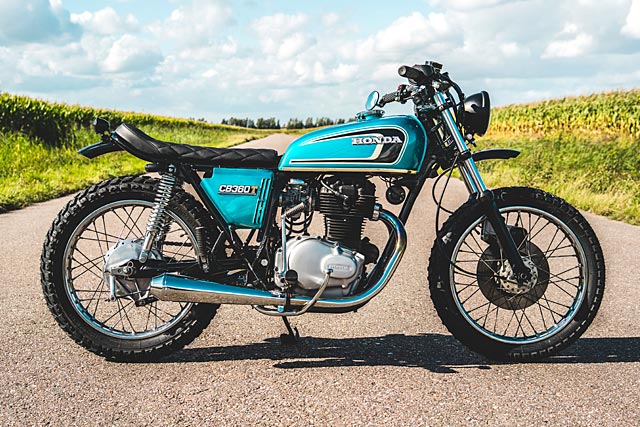 As the old cliché goes, “Restraint is the better part of beauty”. I prefer to think of it like this; there’s nothing more unattractive than someone who’s trying too hard. Be it popularity, personal appearance or 2-for-1 cocktails, the end result is usually always a disaster. Understanding this implicitly, Ironwood’s Arjan Van Den Boom (how cool is that name?) chose a subtle yet beautiful plan of attack when it came time to build this cool little ‘75 Honda CB360 tracker. Arjan says that although he found it online, the bike was located only a few miles from the shop. It’s a 1975 Honda CB360T; a.k.a. ‘the one with the disc brakes’. Being light and compact, they decided to make a hybrid scrambler/tracker bike. So it’s a small bike that’ll go anywhere and get you into a whole bunch of trouble? Naturally, Arjan called it ‘The Rascal’. “The inspiration was to make a clean, simple, vintage and fun bike that would be suitable for both guys and girls”, Arjan says. “Something that would make it easy and cool to explore the urban streets, or even to take off-road into the dirt”.

“It’s a restomod so apart from the usual restoration, we completely redid the engine and the bike was upgraded with some modern LED lightning. Due to the bike’s relatively low power, it needed to both look and be light”. As is so often the case, the mods were started with a welded tail hoop tweak to the frame. Once complete, a two-up bratstyle seat was added, along with some short (and high) fenders, new stainless brake lines, Heidenau knobby tires and some new Renthal handlebars.

“Then we lowered the front and installed some short Megaton mufflers. The paint we left pretty much untouched; it was still in pretty good condition after all those years. Yes, it had some rust and patina but overall it was in great shape. I really like the way the bike looks semi-new yet semi-old“. Mechanically, Arjan says that it was an easy, quick project; almost a walk in the park. So without any issues there, what was most challenging for him? “The hardest part was to get the right proportions and lines”, he recalls.

While some of you may note that those lines seem to be made more awkward by the elongated seat, Arjan says it’s entirely fit for purpose. “Yes, it might be just a little too long, but now it also holds the bum of a girlfriend on the back while taking you comfortably over the Amsterdam canals”. Sounds like a pretty good day to us. “I probably like the overall look of the bike the most; it’s a real cool little vintage machine. We wanted an old-school bike with a little ‘dandy’ mixed in. I think we got it. It basically handles and goes like a moped, looks great and is also sounds great with the megatons”.