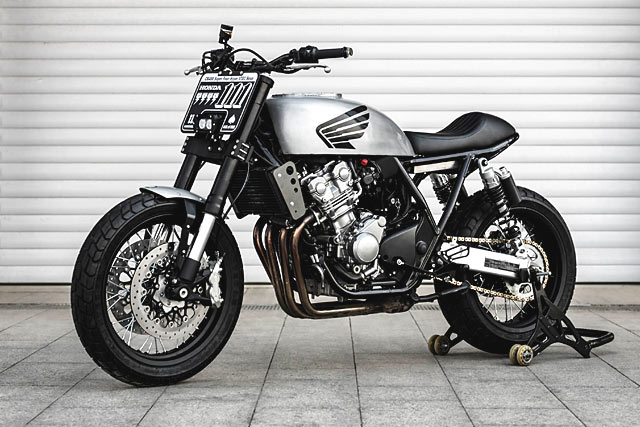 When someone mentions the words ‘Honda’ and ‘VTEC’ in the same sentence, you’d be excused if your mind was filled with images of stanced Honda Civics with neon lighting, tearing around your local strip on a Friday night. But as any real Honda aficionados will tell you, their famous VTEC is available in magical moto land as well. For the VFR800 and CB400SF Super Four HYPER VTEC (try saying that after a few drinks), VTEC was also trialled. And while its success and benefits are sometimes debatable, what isn’t is the fact that this Street Tracker from China’s Mandrill Garage is the coolest CB400 Four we’ve seen in a very long time. But what the hell is VTEC? I’m glad you asked. The acronym stands for Variable Valve Timing & Lift Electronic Control, and it is a system developed by Honda which was claimed  to ‘improve the volumetric efficiency of a four-stroke internal combustion engine, resulting in higher performance at high RPM, and lower fuel consumption at low RPM.’ The VTEC system uses two camshaft profiles and hydraulically selects between them using an oil-pressure actuated pin, meaning that one of the two intake valves stays closed until higher rpms are reached. The net effect is that more top-end power is produced and the torque curve is smoothed significantly. Of course, it’s not just the Honda VTEC that makes the CB400F one of Asia’s better custom bike donors – as Mandrill’s Luo Hao explains. “It is a very famous Universal Japanese Motorcycle in East Asia. The engine is relatively small due to regulatory restrictions, but it has four cylinders so the power is very smooth in its delivery. It’s not heavy and it’s not big; it’s very good for daily use but it’s definitely not so cool or stylish.” The answer? Luo decided to add a little racing feels.

Luo started by designing the whole tracker on paper (or more correctly, pixels) before a single tool was raised. The main benefit – apart from the fact that it’ll help you get a killer bike at the end of the process – is that the parts the project will need is pretty much sorted from the get go. This allows you to make the most of your time, budget, and to minimise those time-wasting, “I just have to run down to the store again” episodes. “Next we stripped the bike. In some ways, I find this the most interesting part of a bike build. You become like a destroyer.” I guess that goes doubly for when you’re massacring it with an angle grinder. Anyone can strip and cut a bike, but putting it back together and making it look as good as this Honda is what us regular folks would have trouble with. To shape the tank, Luo started with a 1:1 scale foam plastic model that allowed him to form the aluminium to within mere millimetres of the original design. The results really make the bike and the oversized branding is a smart touch that really lends a ‘larger than life’ character to the finished look.

[superquote]“Next we stripped the bike. I find this the most interesting part of a bike build. You become like a destroyer.”[/superquote] Luo then went into some of the tracker’s more interesting details. “The front number plate is carbon fiber, along with the handlebars. The tank’s filler cap is in an enduro race style, but I decided to add a glass sight window so you can see the fuel. The triple trees are new, CNC-made items. The forks are from a Ducati Diavel and I changed the wheels to spoked rims while also adding Pirelli MT60RS tires. They’re great on both the dirt and the road, and they look cool as well. To mix things up a little and add some retro looks, I chose a cafe racer seat.” After testing the set-up on the road, Luo reports that the new CNC foot pegs are pretty much in the perfect position, while the short exhaust pipe sounds beefy and aggressive, too. “Also, the new Brembo master cylinder and radial caliper work exceptionally well.”

Luo’s final touches on the Honda included a beautifully minimal paint job, and a few choice Motogadget parts including a set of m.blaze discs and a new motoscope tiny speedo. “My favourite thing about the finished bike is probably its new-found sportiness. Not only does it look faster, but the weight reduction means its performance is also much improved.” “The biggest challenge for this tracker build was the new tank. As anyone who’s customised an EFI fuel tank will know, the pump’s location inside means swapping one tank for another is much more complex than just finding a way to mount it.” It’s a story we hear often but clearly it’s not one that stopped Luo from creating another killer custom build, and one that’s cementing his place as one of China’s new rising stars.