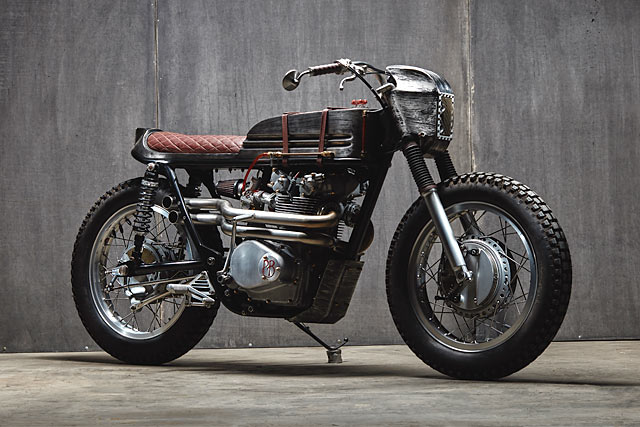 Living next to the ocean is gorgeous, but as any surf-girted motorcycle nut will tell you, all that salty sea breeze just destroys motorcycles. It eats chrome, dulls aluminum and causes rust to flash up in weeks. So what’s the point of a polished custom if it’s just going to get eaten by the sea? Well, there’s not. That’s how the Gold Coast’s Pop Bang Classics came up with this, a post-apocalyptic 1971 Honda CB450 dubbed the ‘Borg’. 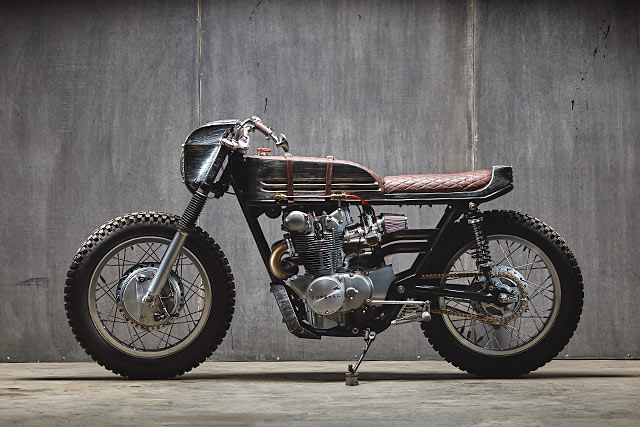 The owner of the ‘Borg, Kenny Smith, had been eyeing off a custom ride for a while. “I love motorcycles and design, so it seemed like a nice project to have ticking over in the background,” he says. “So through some friends I found a 1971 Honda CB450 for sale. It had been modified quite substantially from the original, however a lot of the modifications were backyard jobs that weren’t really worth salvaging.” 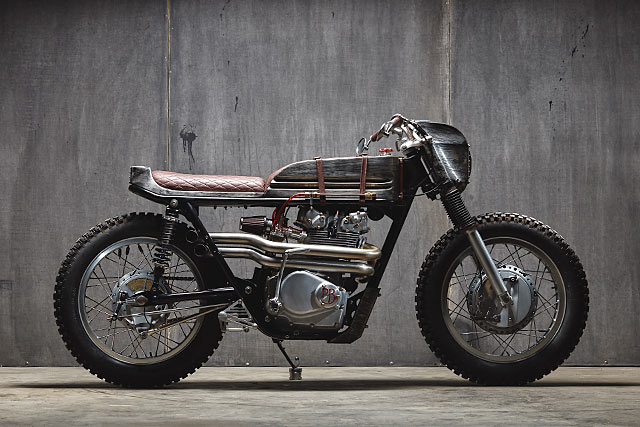 Then Mr Smith waltzed into Pop Bang Classics, a Gold Coast-based motorcycle customiser headed by Justin Holmes. And Kenny knew what he wanted. It was all based around three specific criteria. “Firstly, the environment around me,” he explains, “I live in a coastal surfing town bordered by mountains and with a valley behind. It was important the bike reflected that. I was also inspired by machines in movies like District 9. A mix of dirty, rough metalwork exteriors and sophisticated electronics inside.” 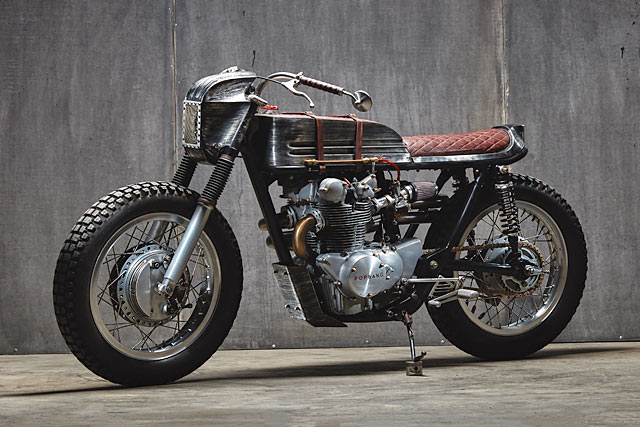 [superquote]“living in my area near the beach requires endless WD 40-ing to keep the corrosion away.”[/superquote]

The final reason was far more pragmatic. The nearby ocean. “I’d previously owned bikes with lots of chrome. And living in my area near the beach requires endless WD 40-ing to keep the corrosion away. Stainless steel just accumulates a patina and looks grittier the dirtier it gets.” 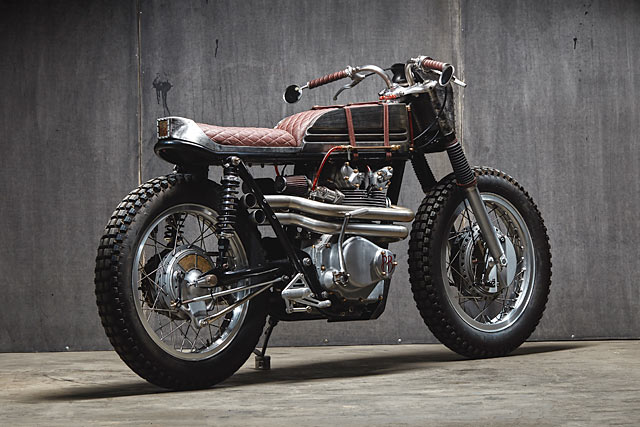 With such a clear brief Pop Bang Classics launched into the ‘Borg. Firstly the frame was detabbed and smoothed out, with the new rear subframe designed to form a continuous line under the seat and tank. In a neat nod to practicality the upper left hand portion of the tank under the frame can be removed, allowing easier removal of the engine.

Not that it’ll need it for a while. The peppy little CB450 powerplant has been sandblasted, brush finished and rebuilt. It’s now fitted with a Pamco electronic ignition and a single fire twin coil. It also runs a pair of K&N filters, JRC engineering PWK 30mm Keihins with clear float bowls and a custom-made 316 stainless steel twin exhaust. But the real magic is the litany of tiny little details scattered throughout the ‘Borg. 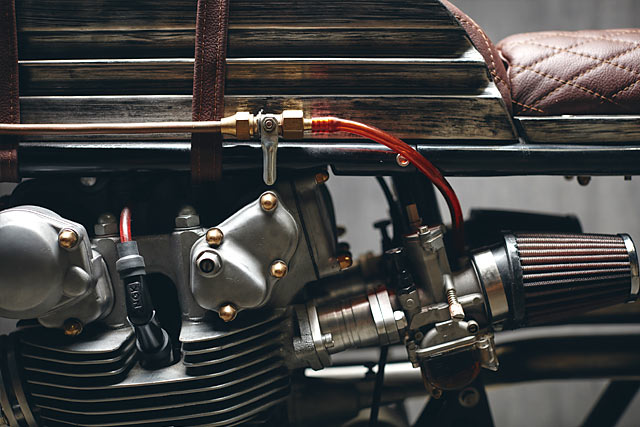 But that’s not to say there isn’t some traditional niceties on the Borg. Take the front wheel for example. It’s a massive four leading shoe front brake stolen from a Suzuki GT750, with remade brake plates featuring bigger scoops and vents. The rear brake face plates have also been opened right up. 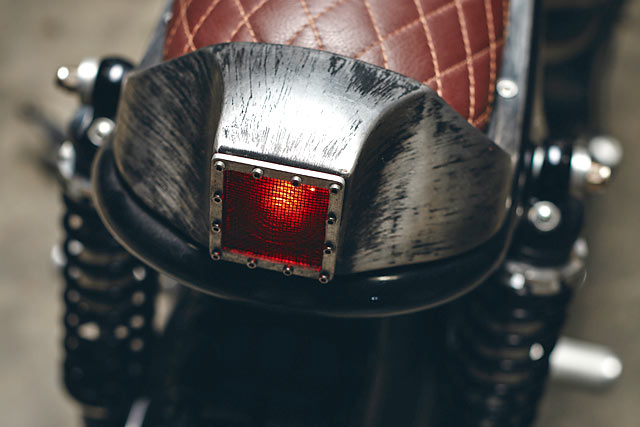 The Mad Max-esque look of the bike really belies the rideability of the ‘Borg. Most post-apocalyptic bikes kicking about have to sacrifice something in their execution. It might be fuel range. Suspension travel. But the ‘Borg still runs proper Gazi shocks, has all the lights required for registration and a seat that’s still functional. All packaged up in a kickass, weather resistant finish. Beat that, mother nature. 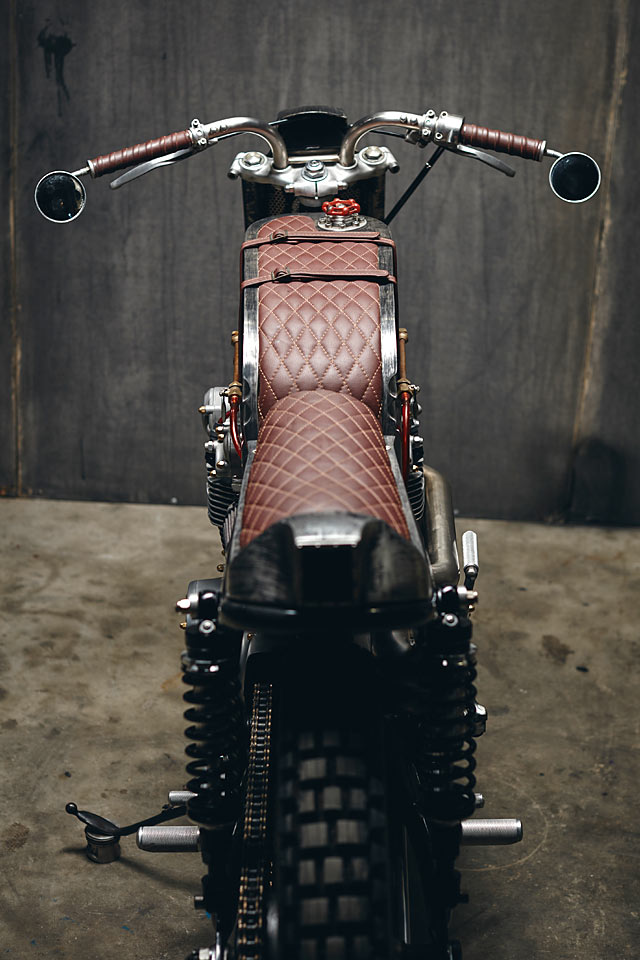