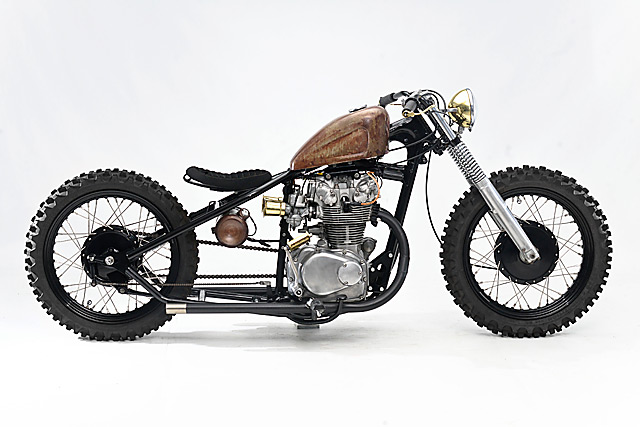 Sunsets. A cold beer. Hearing that Nickleback have split up and been sent to prison. Life’s all about the simple things, and today’s bike is exhibit ‘A’ from the high court of less is more. With a über minimal approach, a slammed stance and a decidedly agrarian look, the latest bike from Michael Mundy and his Steel Bent Customs is one sweet knobbled bobber worthy of a Sunday ride or twelve. Meet the ‘Seven-1’. ‘It’s a 1971 Honda CB450,’ says Mike from his Florida workshop. “Or more correctly, the ‘Seven-1’. About 5 or 6 years ago during the early days of Steel Bent Customs, I found the donor bike about a mile away. It was back when I was still building bikes in my home garage. Anyhow, I know fate when I see it.” The 60s and 70s model 450s are rare, so Mike knew as soon as he saw the bike for sale that he wanted it. “I had to throw my 2-year-old son in the truck, attach the trailer and go grab it.” Start ’em young, that’s what we always say. “So off we went.” “I brought the bike home and quickly realized that there wasn’t much that was salvageable besides the engine and part of the frame. Clearly a bobber was an easy choice, so I tackled the rear first. The pre-fabbed hard tail was originally built for the XS650, but I modified for the 450 frame. For a mix and match, I think it came out pretty good.” Mike’s design for the seat support consists of an upside-down trailer leaf spring and subtle-yet-slick black suede seat. The tank is aftermarket Harley peanut unit, and the front end is off a CB650 which was selected for its longer downtubes. The handlebars are custom-made from a donor lower triple tree with some inverted levers.

Finishing touches were added in brass to match the velocity stacks and the headlight which Mike sourced from an early model Ford. “The hubs are stock CB450s laced with stainless steel spokes to Harley 19″ rims front and rear,” notes Mike. The tires are a Michelin dirt bike design and Mike notes that they create an nicely intoxicating ‘whirring’ sound as she rolls down the road at freeway speeds. The ‘oil bag’ holds the minimal wiring and a small battery. She’s kickstart only, and Mike notes that she’s surprisingly reliable for a 44 year-old bike. [superquote] “I’ve actually shredded the title. It’s a precaution to make sure I never sell her.”[/superquote]

“She will always be very special to me. She’s followed me from the home garage to the current Steel Bent shop. I’ve actually shredded the title. It’s a precaution to make sure I never sell her. I figure if I ever fall on hard times, the trouble of applying for new paperwork will give me time to come to my senses and change my mind.” Smart man.