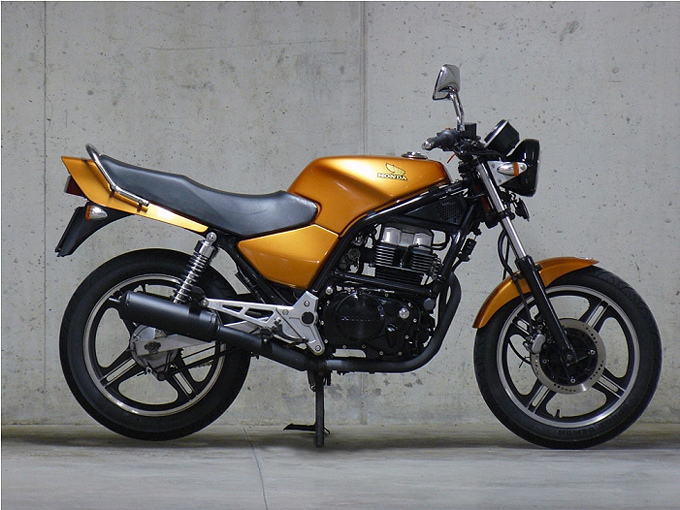 Luca Bar is a young Italian designer who caused a stir on many motorcycle websites around the world with his impressive concept designs. We particularly loved his Moto Guzzi S4 redesign and his Moto Guzzi V7 Cafe Sport. This time, Luca has sent us some pictures of his 1986 Honda CB450S fresh from a total restoration. “The bike has been totally disassembled, cleaned, repainted and updated” Luca tells us. “New springs on the forks, back shocks from a Bonneville Scrambler, shorter final gear to get a bit more push from the small engine and many other details”. The CB450S has a nice story, it belonged to the father of a friend of Luca’s for many years (92000km), but he eventually ran it into the ground. “He wanted to trash it because it was worth nothing and due to the strict environmental laws it couldn’t go downtown, I decided to pay him the property change fee and get it in my garage. So I stripped down the bike and began looking for components over the net. The biggest trouble was finding the engine gaskets, finally we understood that the bike is a French unit and that French CB450S had a different engine shape…hard to believe but it is. I changed almost all the replaceable parts. It has new springs on the forks, rear shocks from a Bonneville, new brakes (next step will be new brake metal net lines) new seat cover, new paint, mirrors, blinkers, handle bar, shorter final gear to get a bit more push from the small engine and many other details”. After 10 months of hard work Luca has turn this CB450S – which could have easily become scrap metal – into a simple but stunning bike to be proud of.