“Gustavo from Pasquale and his dad are fucking legends. Just the absolute best.” That’s how our man Marlon Slack described the family powerhouse that is Colombia’s Pasquale Motors, and he’s harder to impress than a hangry Vladimir Putin. We don’t think it’s an exaggeration to say that the whole custom scene in Colombia looks to them for inspiration and guidance, and boy are they the right guys for the job. Asked to build a patinaed CB500 for Colombian KTM Dakar racer Santiago Bernal Mejia from a box of bits, here’s the results. 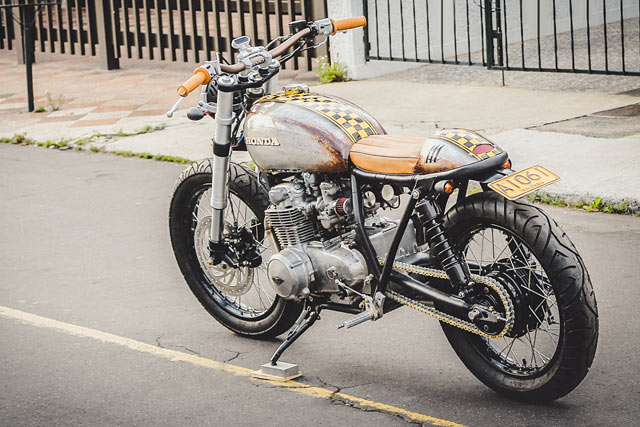 “We started this bike two years ago when Santiago came to us with a frame and a bunch of parts in boxes for his new CB500 four. The first step was gathering all the parts together and cataloging them so we knew what was missing, what we could use and what things we needed to order.” Understandably, In Colombia this is not an easy task. “The next step was to catch up with Santi and decide what we wanted the project to be. He mentioned one of our favorite bikes, the “Angelina” KZ400 that opened many doors for us.” It was actually featured right here on Pipeburn and it was the first bike that Gustavo and Esteban took to an overseas show. 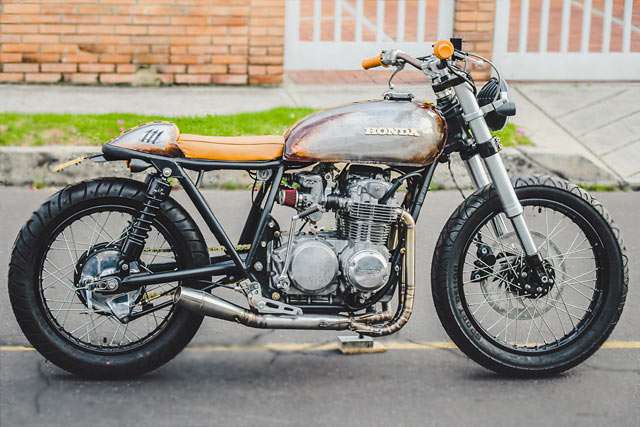 Santiago and the boys wanted to build the Honda 500 with the same idea; clean lines and a low profile, but more focused on being a comfortable bike to ride and with better handling than the donor bike. “We wanted to create balance between the original tank and the rear of the bike, so we shaped an aluminium tail that works as a battery cover, seat pan and tail light, too. The tank was reshaped back to its original form as it had been badly crashed and the mounting points were then lowered. Those two pieces were painted with a chequered racing stripe and the raw metal was finished with a clear coat.” 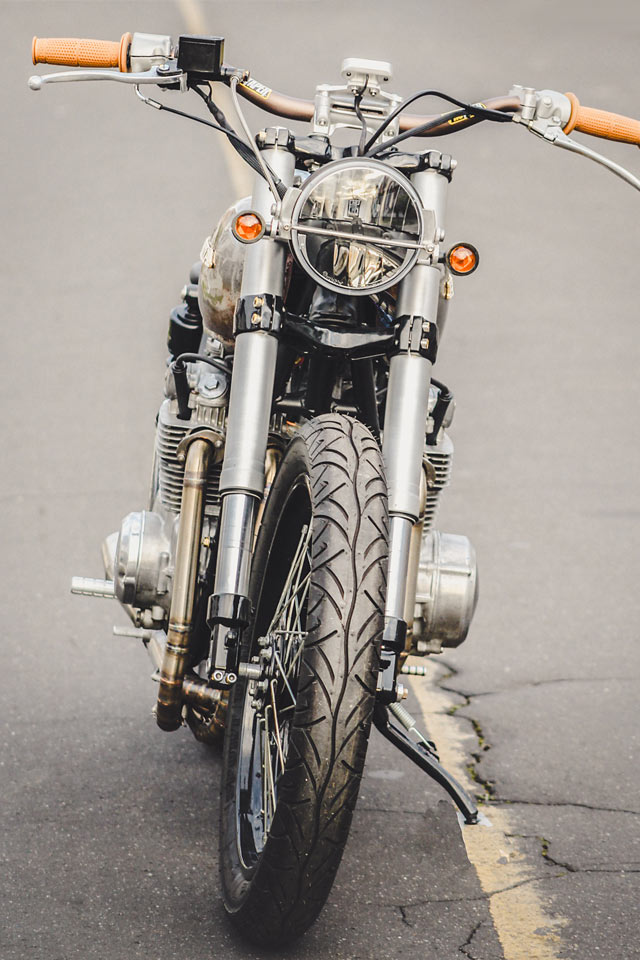 For the ‘Truck Lite’ LED headlight, Gus and Este again took the inspiration from an older build – this time from the support they both made for their ‘Gladius’ BMW R1150R. “But instead of the light being mounted to the chassis, we mounted it to the WP front forks. We use 6061 aluminium and made the support from three pieces that we welded together.” The forks were then brushed and painted with a tougher than tough Cerakote finish. 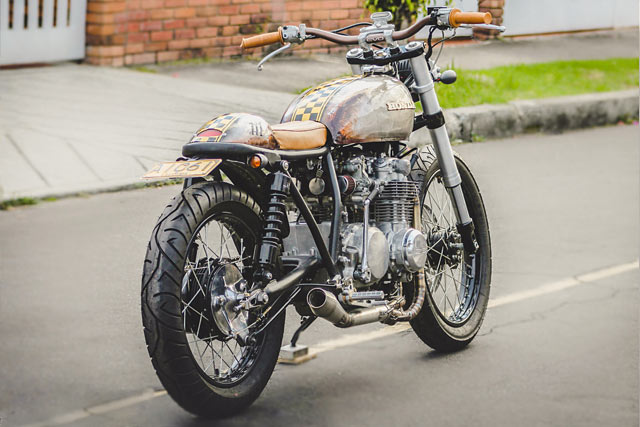 “Once all of that was done, we really got stuck because we were missing some key engine parts. After some months, we ended up cannibalizing a donor engine just for the spares. After the engine was done, we worked on a custom electrical harness and started thinking about how we wanted the exhaust to be. We realized the most important thing for Santiago was the sound and having decent torque.” To make that a reality, they created a 4-into-1 collector and a small silencer that was made out of stainless and was welded using back purge. “As in most of our bikes, the exhaust is something characteristic that we usually spend a lot of time on; for this one we chose a more organic form that complemented the simple, aged look.”

[superquote]“We got stuck because we were missing some key engine parts. We ended up cannibalizing a donor engine just for the spares.”[/superquote] 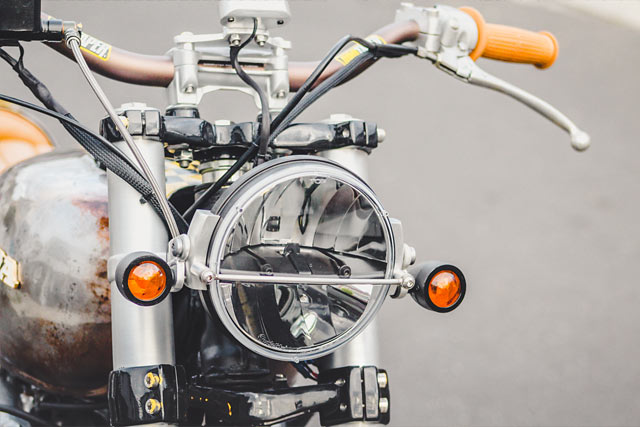 The frame of the bike was shaved, taking out all the unnecessary tabs. Then the father and son team added new rear struts mounts and some fresh tabs for the rearsets and a frame loop. Then everything was topped with black powder coat. “For the rear, we used a progressive suspension set-up and the rear sets were made like the sole of a Nike sneaker. This was very tricky because it ended up needing a milling machine.” 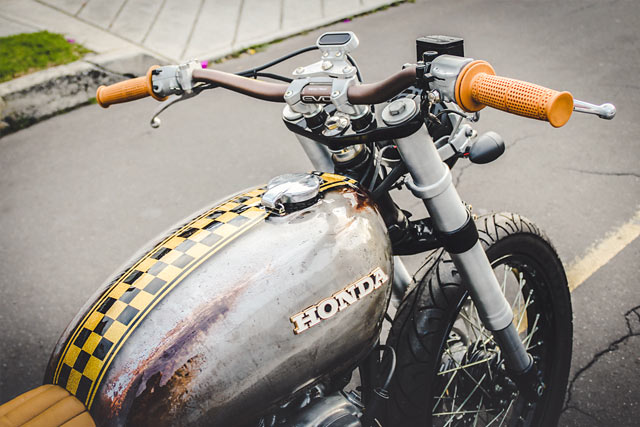 The dash was finished with bronze Pro Taper handlebars and a Motogadget speedo that was mounted in a custom aluminium piece. For the controls, the two restored and polished the originals to keep that retro, used look that Santi loved so much. “After the time it took to finalize it, we are happy with how it came out. We love the balance between the cafe racer and the brat style that we managed to create and how we kept the clean metal finish but added a rough, textured look with the paint. In terms of handling, we love how it now rides with the new stance, the WP inverted forks and the progressive struts.” And the KTM-sponsored racer with his team of mechanics seems to agree.

“The most difficult part to make was the headlight support, because it was made entirely with a conventional milling machine, which required a lot of attention to detail during processing. To get each set-up perfectly aligned was incredibly tricky.” For the average man, maybe. But obviously not for Colombia’s finest custom bike family. 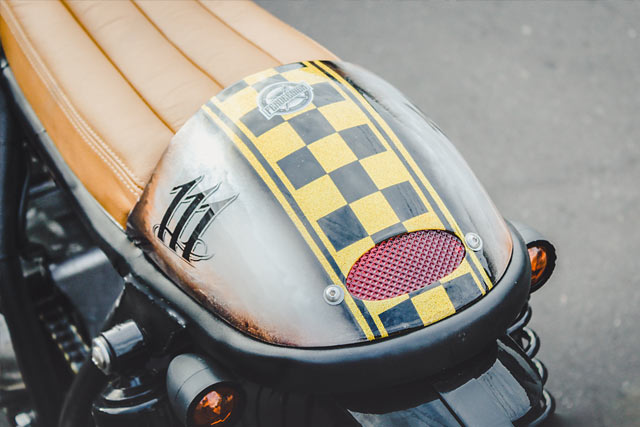