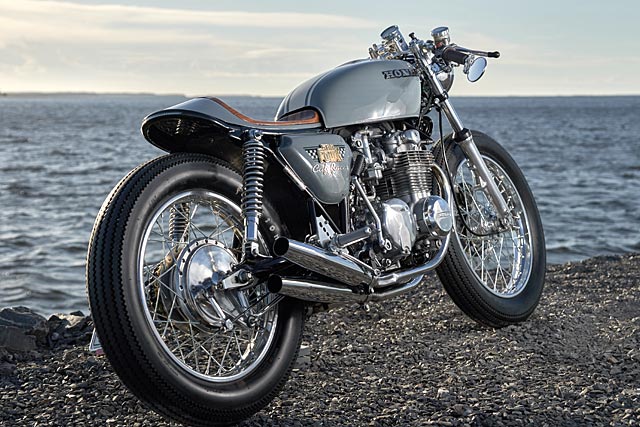 The Scandinavians and beautiful woodworking. They go together like cafes and racers or Trump and super hold hairspray. Any Scandinavian, Norwegian, Danish or Finnish house worth its salt should have some amazing examples. And in the Finnish house of school teacher and bike builder Sami Karvonen, the example is this superb four-pot Honda CB500. Got wood? You have now… “I‘m a school teacher and working with bikes is just a hobby for me,” says Sami, quite humbly. “I have always loved to work with my hands and do creative things. For a few years, I have been building fixed gears and single speed bicycles. I have also been restoring some old ones.” A few years ago, Sami happened upon a bunch of cool cafe racer photos when he was looking for some ideas for his bicycle building. And that was all that it took. He knew straight away, he just had to build a cafe bike. “When I was twenty years younger, I used to have a Honda CB; that‘s the last time I had a motorbike. That bike was for everyday riding, all I really did to it was some basic maintenance to keep it on the road. So I didn’t have any major experience in building custom motorcycles before I started this project”. So, choosing the project bike was easy for him: it was CB all the way. “I tried hard to find a good one and luckily I found it nearby in Northern Finland. The bike was a Honda CB500 K3 four from 1977. It was more or less in neat, original condition. It would have been easy enough to restore the bike, but it wasn‘t what I really wanted. I already had a vision in my mind so I did some sketches on paper, but mostly I followed the picture I had in my mind“. “Because this was my first motorbike project, I spent a lot of time on the internet looking for advice, tips and inspiration. I can say that internet was by far my most important tool during the project.” Sami originally bought the bike in November 2016 and started disassembling it immediately. The engine was working fine and he had no intention to up the power, so it was just given a service and left alone. “I just cleaned, polished it and changed some wiring, tubes and the air filters”. The frame was cut behind the original seat and modified for a seat cowl, which Sami welded up himself. Making a wooden seat was one of the big ideas he had from the very beginning. “I planned the stripes of wood so that they continued from the tank to the seat and beyond to the seat cowl. The darker wood is teak and the lighter one is birch. How did I do it? First I sawed some arches and then I glued them together. The rest was just hard work, filing and sanding”. Then the footpegs were changed and moved backwards. For adjustments, Sami fabbed up some triangular aluminium pieces thanks to a friend’s CNC machine.

“Maybe the hardest thing during the project was sanding all of the parts for painting and polishing. I honestly thought it would never end, but of course it did. Then, all the lights were changed; I wanted a big, chrome headlight and minimal everything else”. To this end, the LED tail light has been integrated into the bike’s back loop. Sami says that choosing the colour wasn’t easy. He wanted it to look vintage, and finally he decided it would be grey with light beige stripes. All the painting, including the seat lacquering, was done by local professional car painter Sami Virpi. Clearly, he’s done a great job.

“Apart from those two, one of the biggest challenges for me was to find the time for the project. Because of the daytime job and family, my time was really limited. The 2017 riding season had already started, but my bike was still in pieces. Finally, I started my summer vacation and I worked every day for two weeks straight to finish it”. “I’m very happy with the end result. For me, the bike looks clean and cool. I feel very proud riding the bike in the few sunny, warm days we have left here. When I’m meeting other bikers I have got a lot of admiration, but also a lot of questions. Mostly about the wooden seat and it’s hardness. They also kept saying that it looked quite elegant and that it makes my bike more unique. I agree”.