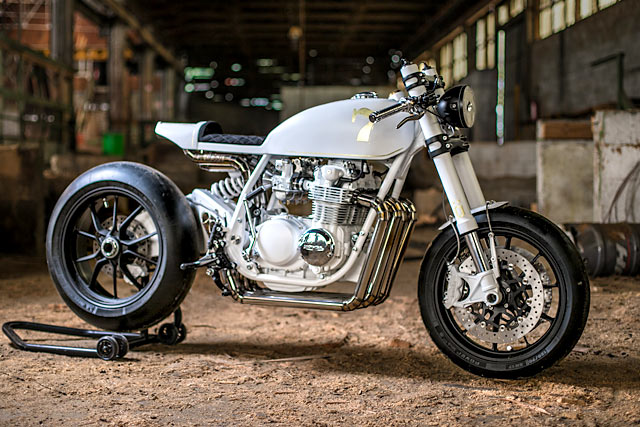 There is nothing in the laws of physics that says leaving a pile of parts in a junkyard couldn’t result in the wind alone turning them into a sweet custom machine; it’s just that the odds are infinitesimal. Instead, to make it a sure thing, you only need to park a modern Ducati Panigale next to a classic 1973 Honda CB500 in the Duke Motorcycles workshop. And here in the foothills of the French Riviera, they’ve created this low entropy, high energy, retro tech cafe racer they call ‘Mrs Duke.’ Of course it won’t be ready right away, head chef of delicious customs at Duke, Lionel, has more than 20 years experience in the motorcycle game and likes things done right. With a whopping 700 hours of build time required for him to work his magic on this one machine in his simple garage to finish the final product. At current rates of pay and the quality components used this makes it one hell of an expensive build. But that was never the point, he built it for himself and as he tell us “it is a personal project that I wanted, deliberately different from what we can see, a project that looks like me and that highlights my style and all the methods of work that I use.” The challenge he set himself was to create a “2018” cafe version of a Honda CB500 Four by mixing old and new, much like many of the manufacturers churning out retro bikes, just that this is of a much higher standard. The modern Ducati components are far from a bolt on affair and meant the CB500 had to be stripped back to a bare frame so it could be prepared properly. To mount the single sided swingarm from the modern Italian required the short block to be in place so frame and chain alignment could be adjusted and reinforcements added in the right places. Then the subframe was cut off and a new slimline replacement painstakingly fabricated to suit. Further down, the centre posts a tab was cut out of steel and welded just in the right place to act as the new shock mount, with the old twin sticks long gone. Before they were bolted together the frame and swingarm were both painted white and even the Ohlins shock got the wedding dress colour scheme on the spring and remote reservoir. The factory Brembo rear brake remains, with a drilled disc and braided lines adding some serious stopping power.

The new addition requires a radial master cylinder to operate with the disc replacing the rear drum, a pair of rearsets would do the job and they don’t come much nicer than a machined set from Bonamici Racing, anodised in black. At the pointy end it’s all Panigale, with a change of bearings in the headstock and a new steering stem required to make the conversion. The Ohlins fork tubes are finished in white with a satin black making for the perfect contrast on the triple trees. The big Brembo’s get the white colour effect and clamp a set of floating discs for epic stopping power. The lightweight forged wheels couldn’t be more different to the old chrome spoked items that the Honda once wore and wrapped in Michelin Power slicks they look mean as hell! When it came time for the cafe racer’s body work Lionel was very clear on the direction he was to take, “I wanted to keep the proportions of the tank original and the form of origin so that one recognises the CB500.” But that’s not ’70s steel under there, with the entire piece from front to back hand-made aluminium of monotype construction. It not only saves a considerable amount of weight it all lifts off in one go! [superquote]“There are distinctly classic touches like the Monza filler cap, while the frenched in Motogadget speedo couldn’t be more 21st century.”[/superquote]

The tank section very much resembles the Honda item, while the rear is kept short and simple with racy lines. But everywhere you look there are little extra details; from the stamped mesh in chrome, to the stainless cables that run from front to back with very deliberate anchor points integrated into the design. There are distinctly classic touches like the Monza filler cap, while the frenched in Motogadget speedo couldn’t be more 21st century and yet it all works seamlessly together. The proud Frenchman from the village of Tourrettes-sur-Loup even going so far as to ensure the famed Drapeau Français can be seen in the instrument when the key is turned. To finish the metalwork a hand rolled front fender was made to suit and is suspended by more stainless cable. As for the colour, “pure white…, it’s something that I wanted to do for a long time, a completely white motorcycle” accented with numbers and logos from 18 carat gold leaf. The number 7 is prominent throughout with Lionel etching it into the headlight glass, with LEDs in behind. The racer’s clutch is now hydraulically operated with an extra reservoir on the housing fed by a braided steel line that runs to the bars. But the pièce de résistance is without doubt the barking mad 4 into 4 stainless steel exhaust, heavily inspired by those from the MotoGP paddock. A total of 115 individual pieces were welded together by Lionel until he had each runner just as he wanted it. Two of the pipes vent out the side by the exposed rear tyre, while the remaining two run under the seat with venting doing its best to ease the heat soak.

Finally, NMB Design was entrusted with creating the saddle for this mighty Honda steed and Alcantara with white stitching continues the quality theme. It’s a rare bike that has a single Ohlins shock on one side and a chrome kick starter on the other. But in creating Mrs Duke, Lionel has shown that not only can he build the bike of his dreams but successfully merge the best of old and new. In the process creating one incredible retro tech racer that will have plenty hoping to get their hands on Duke Motorcycles’ Missus!