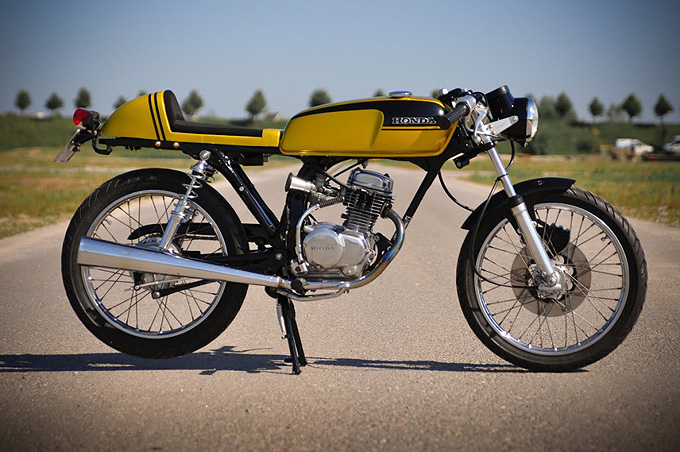 This beautiful little CB50J café racer was built by a Dutchman named Michel. Like many men before him, he realized he didn’t like the look of his stock Honda CB50J, so decided to turn it into a café racer. The jewel in the crown was finding that stunning NOS candy gold gas tank with black stripes. This vintage gas tank came new in a box from Honda spare parts specialist CMS in the Netherlands. Michel then painted a modified cafe seat to match the candy gold gas tank. Some other specs include “rearshocks were replaced with 30cm shocks and the forklegs were shortened 4cm by Ronald. The top tripple tree is from a SS50M, the headlight bucket from a Dax and the headlight ears from Takegawa. Clip-ons were favoured instead of the ordinary holders and handlebars. The wheels are equipped with Michelin M29 tyres, 2.25 front and 2.75 rear. The polished 50cc engine has an advancing flywheel, CB50F camshaft and a larger carb with velocity stack”. Overall a very fine example of a small displacement vintage cafe racer. [Via Chalopy]