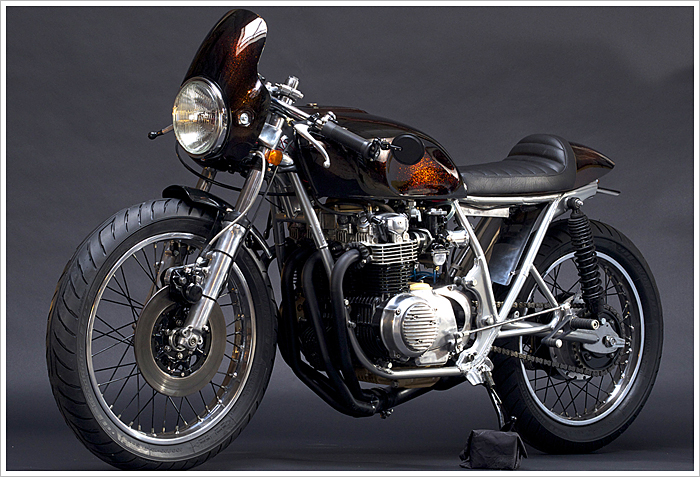 Portland, Oregon is not only one of the ‘craft beer’ capitals of America, but it’s also one of the ‘craft motorcycle’ capitals as well. There seems to be so many great custom shops, motorcycles and events coming out of Portland – there must be something in the Portland water beer. One such shop that we’ve been keeping our blurry eye on is Bridge City Cycles. Started by Anthony Mautemps and his wife 2 years ago, their business is going from strength to strength. “We’ll be moving to 5,000 square foot facility in May” says Anthony. “Fortunately, the move is just across the street.” Bridge City Cycles specialize in vintage and classic motorcycles from Europe, America and of course Japan. Their latest build is this super lean and clean Honda CB550 café racer… The owner of the bike, Mike Johnson bought the CB550 into Bridge City with a clear brief of what he wanted. The bike was in a pretty bad shape and so Anthony and his crew got to work starting from the ground up. They rebuilt the complete top end including the head. They also added a bigger cam, repainted the motor, powdercoated the carb bodies and most of the other parts on the bike. They then custom made the mini fairing and seat cowl. Anthony painted the tank, fairing and seat in Super Flake Copper and Gold Candy. The old school pin striping was done by the talented Jeff Wolf. The black leather seat upholstery was carried out by New Church Moto. “We rebuilt the wheels and pretty much everything on it” says Anthony. We asked Anthony why he thought the motorcycle scene was so healthy in Portland: “Not sure about the scene here, but there are a lot of year-round riders, and then when the weather gets warmer there are a shit-ton of motorcycles out and about. I think it has to do with gas prices and motorcycles being economical. Portland is a very “green” city, so that makes sense. Also it makes getting around and parking way easier.” Bridge City Cycle have yet again built another top class cafe racer. This time with strong 70’s influences that have been executed in a tasteful fashion. You can’t argue with classic metal flake paint, pinstriping and a discreet fairing. We also love the brake light and licence plate which both seem to be hidden nicely under the rear cowl – the cops will probably love that feature as well.