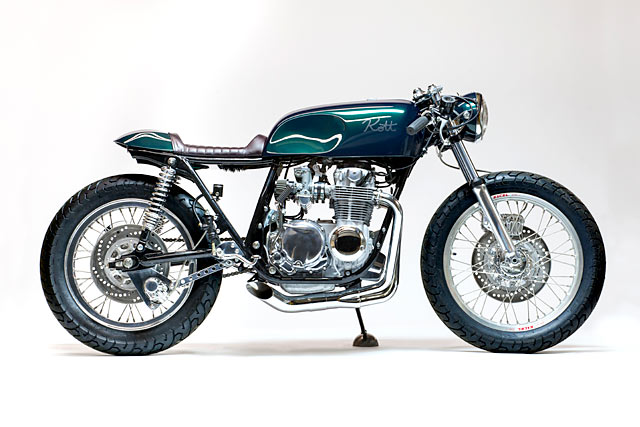 California’s Kott Motorcycles mostly do one thing – build exceptional cafe racers based around late 1970’s Hondas. They’ve wrenched on a few side projects, a few Triumph’s and BMW’s, but the best work Dustin and his team produce is a steady flow of wonderfully perfect Hondas. So, sit down kids and oogle at the Kott ‘18, a 1975 Honda CB550 that’s a masterclass of proportion, colour and stance.

So how did it al start? The customer for the build initially approached Kott Motorcycles with a picture of an old BMW custom, painted in a striking green. ‘That photo was used as the cornerstone of the bike,’ Dustin says. ‘We wanted to create a simple, understated build with a timeless colour scheme including brown leather upholstery and restrained chrome plating’. On first glance the most striking element of the ‘18 is the fuel tank taken from a CB750. It is, in Dustin’s opinion, one of the most important parts of a build. ‘Every chance I get I snatch up old 750 Super Sport tanks,’ he says, ‘They are arguably one of the best looking tanks that Honda designed’. Aside from the tank there’s a host of great little features about the bike. The frame has been shortened and had all the tabs shaved off, the suspension and stance are just right but the best part of this cafe build is the proportions. It’s the 36-24-36 of the motorcycle world. It’s a signature of Kott’s builds and something the team pride themselves on.

‘The front-heaviness of the bike allows the rear to remain clear and free of weight while highlighting its own features,’ Dustin says. The pursuit of those clean, clean lines also run to the front of the bike, starting with the 7” Lucas sealed beam lamp. ‘We buried the headlight as close to triple clamp as possible,’ he adds, ‘and we ended the seat just above the rear axle line’. Take note, cafe builders. That clean look is also helped along by some friendly local laws. See any turn signals on the bike? ‘I rarely run indicators,’ Dustin says, ‘We have some fairly motorcycle friendly exemptions in the States that allows for their absence’. Land of the free and home of brave, right? ‘Anyway, they don’t make riding in Southern California any safer,’ he adds.

[superquote]“I rarely run indicators. We have some fairly motorcycle friendly exemptions in the States that allows for their absence.”[/superquote] Despite a near-encyclopedic knowledge of Honda’s road going lineup in the late 70’s there was one thing about ‘18 that the team a little stumped. ‘The donor bike was given to me,’ Dustin explains, ‘and the rear brake assembly consisted of some hand crafted pieces. I’ve never seen these components before and they didn’t have any branding on them.’ The guys had to pull everything apart, clean the components up and try to figure out what the original builder had intended when reassembling them.

But with all that in place, a new set of rubber, a set of Kott’s proprietary rearsets and a beautiful new exhaust system the bike looks a million dollars. And it rides as well as it looks. ‘The quality of the ride is just simply fun,’ Dustin says. ‘It has all the power you’d expect from a freshly build 550cc motorcycle with the advantage of a considerable reduction in weight’. I don’t have the figures exactly how many pounds the Honda CB550 has shed, but it looks like a damn lot. The ‘18 is a textbook example of an exceptional cafe racer, thoughtfully designed and beautifully executed. Trends in the custom scene may come and go, but I promise you in twenty years time when you come across a picture of this bike it’ll look every bit as good as it does now.