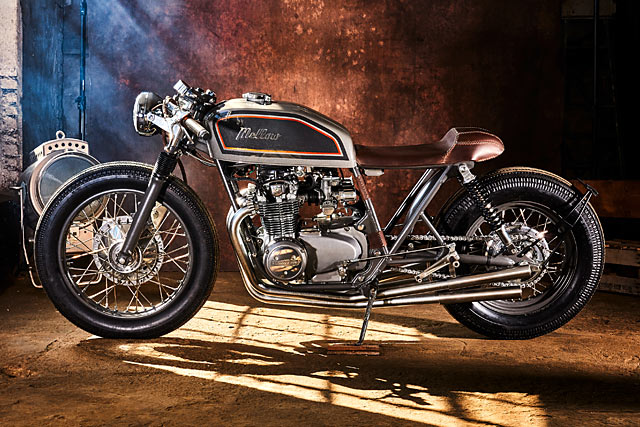 When Germany’s Mellow Motorcycles revealed this, their latest custom bike in January at Verona’s MBE show, their plan was to have it do the hard yards through Europe’s biggest and best bike events for the rest of the year. Sadly no one told the bike’s new Spanish owner, who purchased it a scant 10 minutes after the show’s gates opened. And with classic good looks like this, can you blame him? Say hello (and goodbye) to the ‘Mellow Supershot’ 1976 Honda CB550 Four cafe racer. Our opening small talk with Flo, Mellow’s CEO, uncovered some unexpectedly cool news. “We are opening a new shop in the coming weeks. The venue is inside an 18 century monastery and our showroom is located in the former bakery, nearby Frankfurt. So naturally you’d expect something really cool and unusual. Our friends immediately called it the ‘Ghostbusters Building’. Fingers crossed for future Mellow bikes with backpacked-sized particle accelerators. But back to the bike itself. The basis of the build was a Honda 550 Four from 1976. It was one of many 550s that Flo and the Mellow team had in stock. Clearly, something had to be done about this. Something cool. “We wanted to build a reduced, classic cafe racer for ourselves,” he says. “Something with a slim, old-school gas tank and a front drum brake installed. We knew it would be a hit at the 2018 shows.” But little did they know…

“We started by stripping the whole Honda to the ground, cleaning and customising the original frame, and rewiring the electricals with a Motogadget m-unit and m-lock system. Next, we prepared the upper clamps as well as the extended swingarm for powder coating; it’s an old grey Deutsche Bahn (or German Railway) color code. We thought that would be the perfect color for this bike.” Looks like they were right. Meanwhile, the engine and carburetors were completely reworked and are reportedly now running better than new. Turning their eyes to some of the smaller details, the team replaced all the screws with new inox or titanium items and CNC-machined some velocity stacks, each with their own in-built brass mesh bugstoppers. They also bolted on a lot more handy Motogadget parts like the speedometer, the front indicators and the polished inox switches. The license plate holder is also made out of inox and matte black powder coated to ensure it didn’t disturb the bike’s classic, clean lines. The Honda’s brake lights and indicators are hidden in the rear end of the frame, right under the end of the leather seat. A tiny LiPo battery pack is also installed under the seat unit, along with the rest of the electrics. “We also wanted to redesign the 4-into-4 exhaust system to make it much slimmer and to add a real ‘supershot’ 70s sound. We bent the complete pipe section in one piece, with no welding at all; getting them to all match at the rear end was a really cool challenge.”

[superquote]“We also wanted to redesign the 4-into-4 exhaust system to make it much slimmer and to add that real ‘super shot’ 70s sound.”[/superquote] “The silencers are installed at the rear end of the pipes; they sound pretty powerful, but thankfully they are German TÜV approved due to the fact that they only have to conform to 1976 standards. You can go over 100dB without any real problems.” Flo notes that a good pipe sound has nothing to do with loudness; it’s mostly the bass and the roar you have to both hear and feel. The leather seat unit and all the little leather details they’ve installed are made out of extra durable “Crazy Horse” leather from Finland.

“The installation of the old Triumph front drum brake was also very exciting,” says Flo. “The customisation and fitting of the unit was not so difficult, but to find the matching brake pads was a real challenge here in Germany. Now we have a very well stocked supplier, but it took serious time to find the right dealer for the spare parts, fit them, and to get it all working well.” Flo notes that his favourite parts of the finished cafe racer are all the beautiful little leather details and the 4-into-4 exhaust system. “Also, the old Honda 400 SuperSport tank with its slim, clean lines and that 70s metallic silver paint job really came out well.” It’s a thought that both us and that new Spanish owner with the short attention span would most certainly agree on. The lucky bugger.