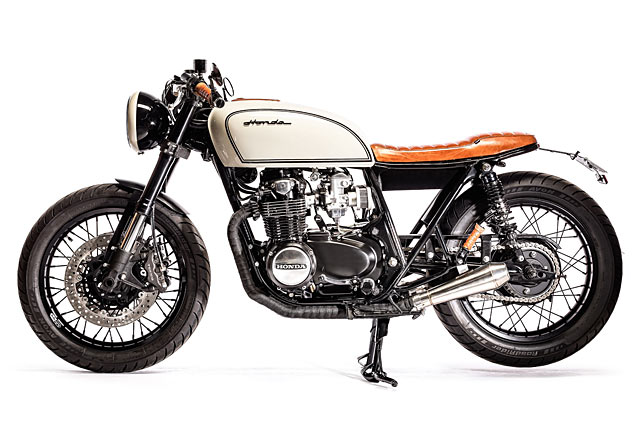 Whether it’s a new bike, car, house, watch or laptop – the temptation is always the same. You want the biggest and the best. You want all the options. You want the heated whatsits, the laser doo-dads and, yes please, I think I will take the carbon fibre weapons pack, thank you very much. For Brisbane’s Ellaspede and customer Kevin, the negotiations started in the time-honoured tradition. What could he get for his hard-earned bucks? But somewhere between ‘hello’ and the handshake, it was decided that this build would tick all the boxes. The result in this ‘78 Honda CB550 that we think is the complete package. Ellaspede’s Hughan Seary tells us more. Is the 550 Four the best all round Honda of the 70’s? It just might be. Owner Kevin wanted a Honda CB cafe racer and after owning the smaller CB350 twin he knew something a little larger from the same family tree was going to be right in the sweet spot for this project. In the mid 70’s many manufacturers were still experimenting with their public offerings, including Honda who already had the smaller CB’s (350 and 400’s) and their big CB750. But it was the battle for the mid market that produced a number of new bikes including the Yamaha TX500 and Suzuki GT550.

Honda evolved the CB450 ‘black bomber’ twin into a CB500 twin to compete, but soon replaced it with a 4 cylinder 500 version. It wasn’t long before the 500cc mill was taken out to 544cc to create the CB550 Four, but it took until ’75 or ’76 for Honda to iron out most of the early issues with this model. This left only few years where the CB550 Four really was the ‘best of both worlds’ in terms of size, weight and performance before the model was finished in 1978. As with any bike of this era, we discussed with Kevin the importance of doing the ‘whole job’ to ensure trouble-free riding once the build was complete. It can be daunting at the start, but Kevin agreed that going through every component on the bike was essential. In reality, it does save time and money ‘doing it once and doing it right’ so away we went. First port of call was the motor, which was pulled out for full inspection. The top end needed work and 1mm oversize pistons found their way into fresh bores. The head was completely torn down and leak tested before being completely rebuilt with all new Honda genuine parts. Two custom seat pans were then made to suit the new frame shape and rear tank profile, one for a full two person seat and the other as a single-seater with a rear cafe-style cowl. The ‘cafe’ seat was an off the shelf unit that was modified to achieve a lower profile and to make it suit the shortened CB frame. It has a hinged seat pad (also a required modification) that reveals a storage unit in the rear cowl.

[superquote]“Two custom seat pans were then made to suit the new frame shape and rear tank profile, one for a full two person seat and the other as a single-seater.”[/superquote]

A custom front guard was fabricated and mounted to the CBR upside-down front end. With the guard fitted, a custom bracket for the bottom mount headlight could be made to position it as low as possible. Continuing up the front end, Daytona speedo and tacho units were bolted to custom-made mounts. The mini warning light panel sits on a custom shroud bracket nestled above the headlight between the gauges. CBR clip on bars, switch gear and ignition switch were sourced and fitted with a few light mods. Keeping it in the family, a Honda CBR front end was sourced and dummied up for testing before being disassembled for rebuild and anodising. Rear shocks were also spec’d at the same time to get the stance right from the get go. Old lower suspension bushes had to be cut out before new ones were pressed in at the bottom with new spacers at the top.

The stock rear hub was retained and both wheels were laced up to new ‘Sun Rim’ outers from the USA using fresh nipples and spokes. Avon Roadriders in 100/90-18 and 130/80-18 wrap the wheels front and rear, with a new chain and sprockets getting them turning. A custom made chain guard made to be as ‘stealth’ as possible keeps things legal. Continuing up the front end, Daytona speedo and tacho units were bolted to custom-made mounts. The mini warning light panel sits on a custom shroud bracket nestled above the headlight between the gauges. CBR clip on bars, switch gear and ignition switch were sourced and fitted with a few light mods.

To minimise future electrical issues, all new electrical components were sourced and mounted. An Anti Gravity 8 cell battery now resides under the seat and all the components are mated via a custom aircraft-grade wiring loom. All wires were sheathed in braid and hidden where possible.

Motogadget indicators, Truflex LED tailight and a JW Speaker LED headlight all made their way on, accompanied by a trick little projector light which shines a Honda logo beneath the bike. A new custom clutch cable and braided brake lines fit to new brake and clutch levers up front. New grips and Motogadget mirrors slide on to bring the riders cockpit close to completion. All other components were either painted, polished or powder coated across the whole bike. Fresh bolts, bearings and seals also replace almost all standard items with genuine Honda replacements used where possible. All the boxes were ticked.

‘Mid tan’ leather wraps both seats in a horizontal stitch style. It also provides some detail and continues the theme across the custom wrapped fuel cap, grips, throttle pull elbow, kickstarter and passenger foot pegs. Always wanting to be part of the build process, Kevin was responsible for the patterned leather on the grips, kick starter and pillion foot pegs.

With the ‘whole job’ now complete Kevin can enjoy some classic Honda cafe racer riding without the worry of leaving a stone left unturned. It’s a credit to him that he was willing to ‘do it once and do it right’ on this build and riding the bike certainly reflects that. As the original reviews suggest, the CB550 Four really does have the right mix of power and agility. 40 years later and now with some custom, aesthetic and mechanical improvements Kevin can continue to enjoy Honda’s middle market machine for years to come.