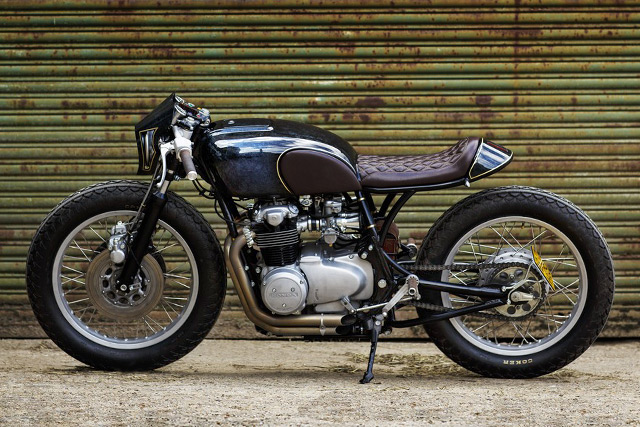 The ever-useful Wikipedia notes that the ‘Ripon’, or ‘Blackburn T.5 Ripon’ to use its correct name, was a ‘British carrier-based torpedo bomber and reconnaissance biplane which first flew in 1926.’ Naming their creations after Britain’s rich aviation history has become quite the thing with Norfolk’s Old Empire Motorcycles, as has creating bloody amazing custom bikes, and drinking cups of tea. And rest assured, this one is no exception to the rule. You may know it as a Honda CB550, but they know it by another name… Alec Sharp, one half of OEM’s dream team, fills us in on the details. “The Ripon build started when we were approached by a customer who had seen some of our previous work and decided that our take on a 4 cylinder café-brat was the order of the day. A large capacity engine was not needed and the opportunity came up to purchase a ’79 CB550 which was promptly stripped and the surgery began.”

In terms of fabrication, Alec notes that it was a complex build. The engine-mounted parts of the frame stayed pretty much stock, however the entire rear subsection was removed and spliced into a bespoke frame and cowling, inside of which they then integrated the necessary LED lights an wiring. “We had to break out the set square and protractor set for the suspension, as we ended up removing the rear shocks entirely. It was decided that there was plenty of room under the engine for a pull-type shock, so we duly obtained a second-hand Buell unit, created a jig on the bench and began extending the frame. Various other modifications were made to the front end of the frame and the swingarm to accommodate the new shock and damper unit. After many trials and tweaks, we got it bang on and couldn’t be more chuffed with the overall classic, uncluttered look it now possesses.” In the tinware department, the tank was shimmied forward and knee scallops were added to stay in keeping with the classic ‘Empire Style’ the boys have become renown for. The front cowling was hand rolled from sheet steel and tidily integrates the headlight with the clocks and ignition barrel. “As always, we started with the running gear, as this can greatly affect or even define the rest of the build. The front and rear wheels were replaced with 19’’ aluminium rims and fully rebuilt with stainless spokes, vapour blasted hubs and wrapped with some classic Coker rubber.”

At the sharp end you’ll find a stock set of forks that have been fully rebuilt and lowered right down with a rework of the internals to house a custom set of super stiff shocks from Hagon, along with a heavy-weight fork oil. They also decided to upgrade the braking system by opting for a twin disc set up rather than the standard single. “A note of caution to others,” says Alec. “We thought it was a simple case of just bolting on another caliper and disc; it most definitely wasn’t.” “Our own aluminium clip-ons were fabricated, vapour blasted and rebuilt alongside the control units and levers and then finished with our laser-cut leather grips. We wanted a ‘cockpit’ looking dash, so we opted for twin Koso units and remounted a simple ignition barrel between them. LED indicators were mounted discreetly front and back and tied into our one-off loom that featured all upgraded or renewed components tied into the new Shorai battery which sits in a tidy leather satchel along with the starter relay.”

The engine had previously had the barrels honed and new rings installed, so they went about upgrading the usual weakest links in the chain; namely new seals, gaskets, a rewound generator and electronic ignition. The old lump was then soda blasted, repainted, the cases were vapour blasted and the fins polished to get what seems to be a fantastic-looking little engine. “The exhausts, although simple, took quite some time to figure out. Initially we wanted high-level pipes, but in reality it would be a choice between high pipes or calf muscles so we installed them low, tucked neatly along the sides. They are just long enough to make it run nicely but short enough to give it some real bark.”

They matched the leather grips at the front with their “universal adjustable leather foot controls” which were made as rear-sets and mounted on two curved struts that have been carefully integrated into the stock frame. Everything was then connected up with stainless linkages and rose joints. “Eventually we replaced the standard Buell shock for a completely custom-made unit from AST suspension, which has fully adjustable dampening and preload settings – meaning we could fine-tune the ride perfectly.”

“Finishing-wise, we enlisted the help of our specialist painter Greg from Black Shuck Kustoms to work alongside side us in creating the look we wanted. Safe to say the deep, smokey blue with gold highlights is perfect in every way. Everything else was powder coated black, vapour blasted or plated to get things looking suitably distinguished.”

Leather seems to be quite an important finish to all the OEM builds, and clearly that trend continues here. They’ve tied the grips and pegs in nicely with the leather battery satchel and the diamond stitched brown leather seat. All reports from the nether regions of the lads confirm our suspicions – it’s comfy as.

“After assembly, we were a little apprehensive to see if the shock would work as we intended it to, but we are proud to say that it functions flawlessly. It’s such a satisfying thing to see working and it keeps the whole bike super clean at the back and really ‘chunks’ up the main body of the bike giving it a vastly more aggressive stance.” And there we have it. Another great build by the proud boys from Norfolk. We’re scared to think just how many cups of tea were downed in the making of this beast. So if you like what you see, and you like tea, make sure and check out their YouTube channel. It’s not half bad. Now if you’ll excuse me, I’m going to put the kettle on.