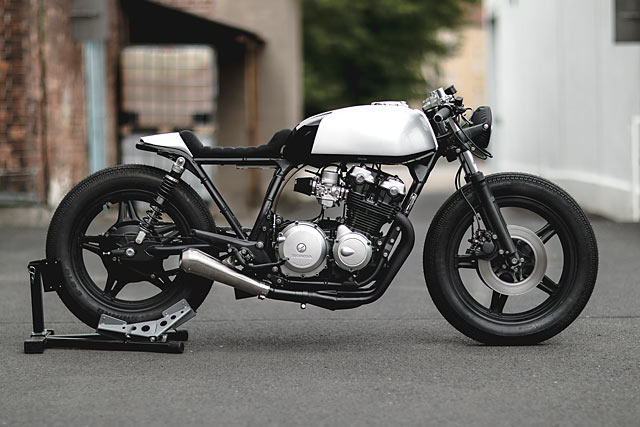 Hookie Co. in Dresden sure do live up to the hype about precision German engineering, but what they add along the way is a sense of fun and relaxation many wouldn’t necessarily expect. Their garage features a small coffee shop, with a comfy place to sit and enjoy free wifi, but it’s little wonder that surrounded by so much motorcycle goodness, many can’t help but place a more substantial order than a flat white. One such customer requested a 1981 Honda CB750 in Hookie’s classic cafe racer style and it was off with the Barista hat and down to business. 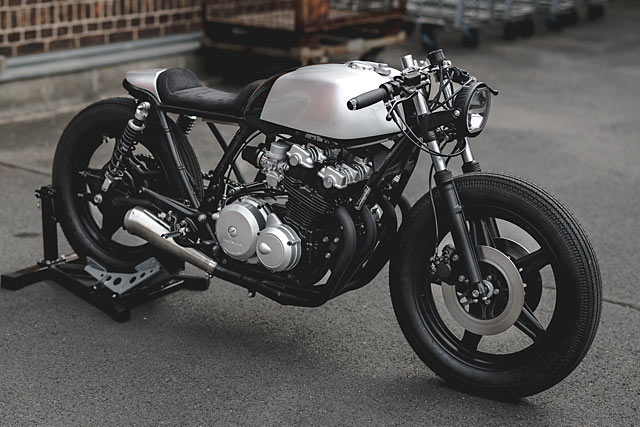 Founded in 2015 by designers Nico Mueller and Sylvia Petrasch, and joined by a small team of brilliant craftsman, the operation exists as much to produce brilliant custom motorcycles as it does as an outlet for their growing product range. Each part is designed in-house and rigorously tested before being released to the public. But complementing the well renowned Germanic attention to detail is a joy that fills the air, with everyone in the team flaunting a big smile and bringing a passion to their work. 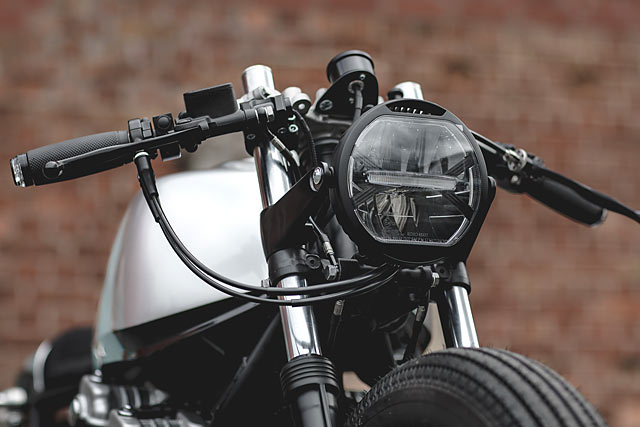 It was all these factors and their ability to consistently produce incredible work that had the owner of this machine known as Black Swan placing his order with absolute confidence he knew exactly what he was getting. However first the main ingredient had to be sourced and as Nico explains this is a strictly 21st century task. “Actually we find all of our donor bikes on platforms like mobile or eBay.” There’s no rummaging through old barns here, but that doesn’t mean the bikes don’t need an old-fashioned teardown.

Each new build at Hookie Co. starts the same way with the bike up on the lift and absolutely every last part removed. As the photos reveal, not a single old worn out bolt will make it back onto the final product, it’s 100% right or not at all. With the frame smoothed out and unnecessary tabs and brackets removed the rear end is prepared for a host of products the company has developed to transform the tail of a CB750. The kit starts with the shortened rear hoop that is neatly welded into the frame and drastically shortens the look of the bike. 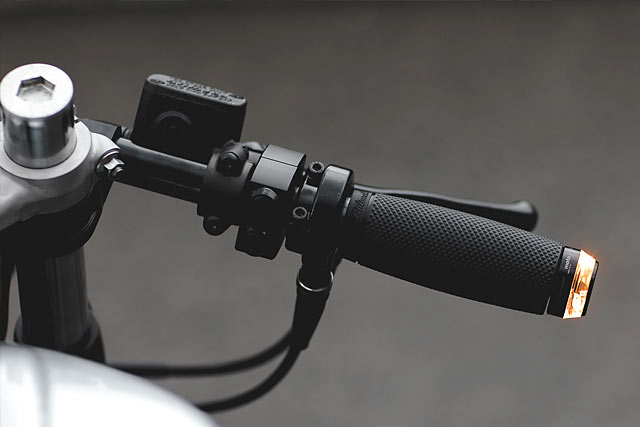 Over the top is placed their “Hawk” seat cowl that is neatly handcrafted from raw .75 and 1.5mm steel and provides for a simple and sleek rear end. Underneath goes their electronics tray that allows everything to be hidden away, a bolt on fit to the CB, it adds almost nothing in weight being made from Aluminium. Above goes the seat pan, which has been designed to work with the Hawk tail and uses clever little mounts to make it a breeze to undo and send it out to your upholsterer of choice. 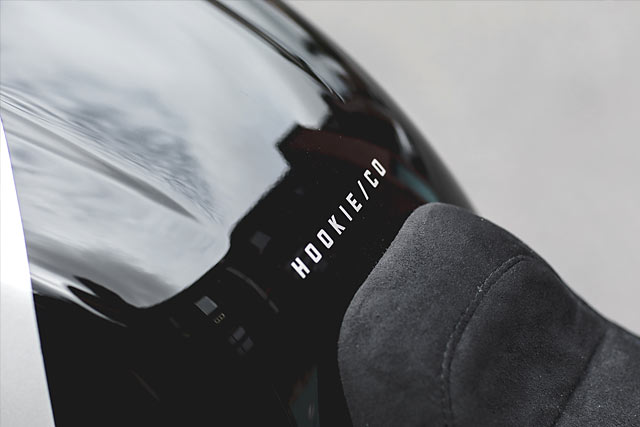 The stock tank is modified to match and then everything is disassembled and sent out for paint and powder coat. It’s at this point that attention is turned to the engine and holy hell do the crew at Hookie have an eye for detail. First both motor and the factory carbs were rebuilt to ensure perfect operation, before every exposed surface was prepared to look its best. But not only does it get exquisite paint and polish, but every last nut and bolt is replaced with quality new items.

[superquote]“It’s at this point that attention is turned to the engine and holy hell do the crew at Hookie have an eye for detail.”[/superquote] 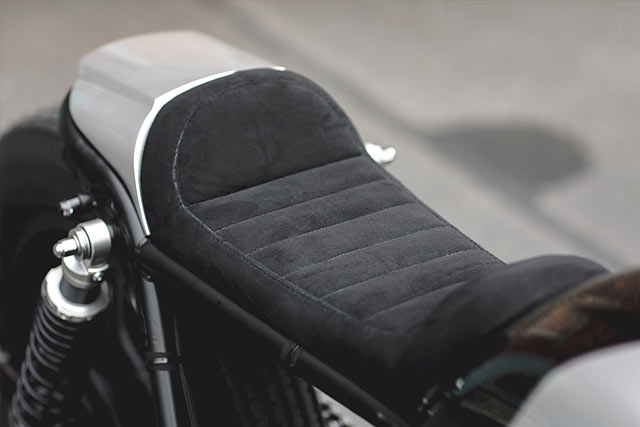 To add some extra poke a set of pod filters feeds air into the engine while a Spark Performance muffler ensures the soundtrack lives up to expectations. Now with the engine slotted back in the bare frame, the complete rewire of the bike can begin. Motogadget provides the central system with an Antigravity 12-Cell Battery hidden below the swingarm in a kit part box that is powder coated to match the frame. A Motogadget m-Lock RFID wireless ignition helps keep things ultra clean and works with the companies switches and turn signals to complete the package. 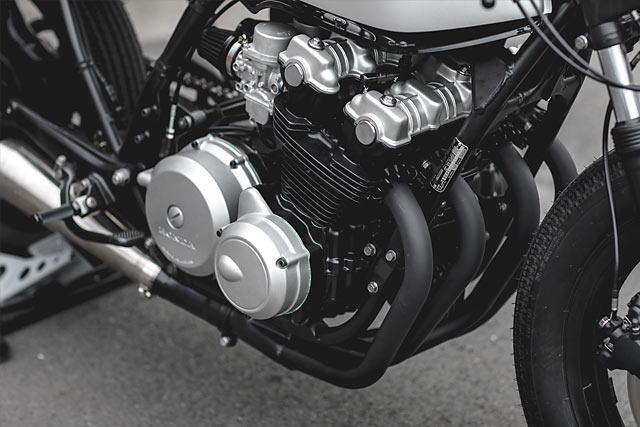 To get the Honda into a rolling state the front suspension is rebuilt and lowered through the trees. While the rear shocks are replaced by much improved YSS Eco-Line gas items with progressive rates springs. Factory braking is retained to keep as much of the bike in period correct appearance but has been rebuilt to Hookie’s high standards to ensure perfect operation. Then the always divisive factory Comstar rims are wrapped in Shinko E270 rubber and they’ve guaranteed tongues will be talking. But it’s hard to argue with just how well they match the look, plus the owner loves them and you won’t hear him scoffing at your choice to order a soy chai latte with honey.

Moving on from the hot beverages on offer in the cafe and the bars are fitted up with a Kustom Tech clutch lever, Grimeca master cylinder and Biltwell grips. The retro tech Koso Thunderbolt LED headlight is a perfect match before the look is completed with two of Nico’s favourite parts, “the combination between sparkling silver paint and flat Alcantara seat, It’s a perfect contrast and very premium too!” he smiles. Before taking the bike out on one of many shakedown runs to ensure any problems are ironed out. Six months of hard work and the order is filled, ultra clean and custom, Black Swan by Hookie Co. proves there is still plenty of life left in the Honda CB Cafe craze! 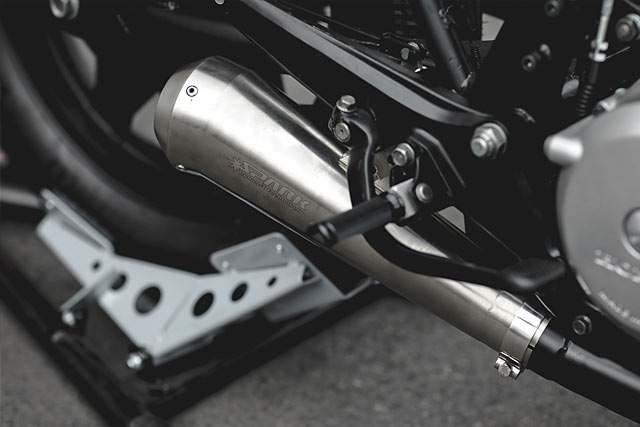