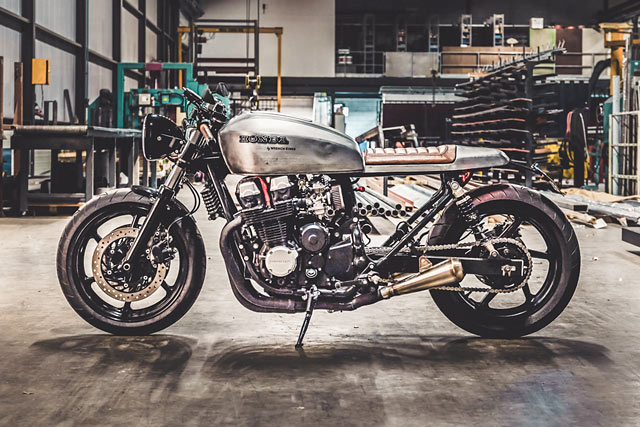 Honda’s CB750 is nothing if not consistent. For almost 40 years, the bike soldiered on to the point where more than half a million examples had rolled of the end of what must have been a very tired production line. The 90s CBs offer a kind of golden opportunity for customisers. For a precious few years, we had bikes that retained the essence of those 70s and 80s classics while being (even more) reliable and cheap as stale peanuts to buy. And now that those very same 70s and 80s bikes are becoming rarer than a eunuchs’ whiskers, it makes double the sense. It’s exactly what Dutch Maestros the Wrench Kings have done with this here Honda ‘96 CB750 cafe racer they call ‘Anvil’. 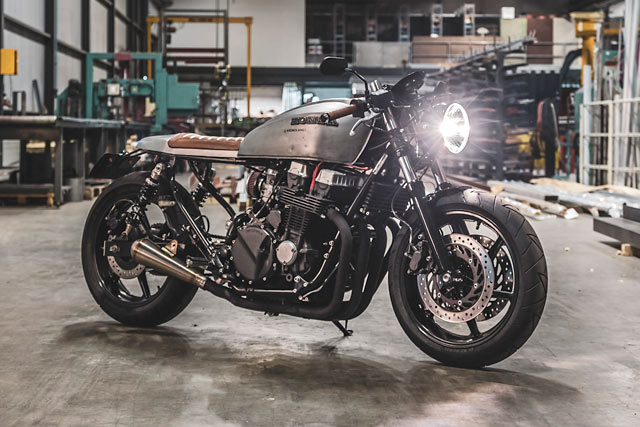 While you might think that custom bikes are all beers, bikes and drill bits, Take from the Wrench Kings is quick to point out that if you want to feed the kids, you sometimes have to do some boring business stuff. “Lately we’ve been busy with some fresh branding and a new shop website. Please tell the Pipeburn readers to check it out.” You heard the man. The link’s down below. “We’ve also renovated our shop, too. Apart from that, we’re busy collaborating with some big brands such as Royal Enfield, so stay tuned.” 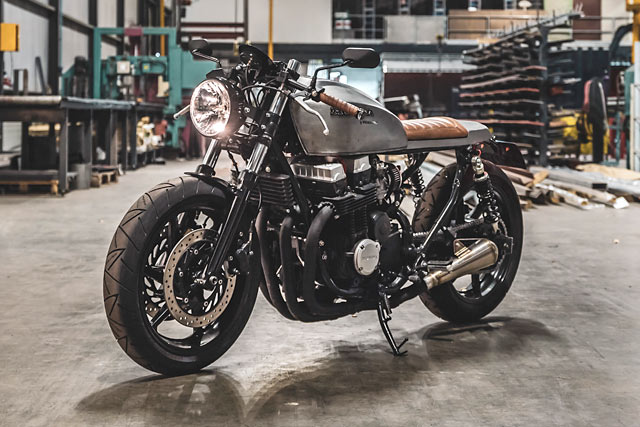 Being the nice young lads that they are, a bike-less customer was lucky enough to have the shop lend their considerable experience and well-trained eyes to the donor bike’s purchase. “We bought the bike for the customer since he didn’t have one yet. We found this one at our friend’s shop and the base was actually pretty good. As we always say, ‘Shit in, shit out’. You can’t make a pretty bike if the base isn’t solid. This one had low mileage, was in good condition and came with a full maintenance history.” Specifically, Take tells us that it was an end-of-the-line CB750F2 from 1996. 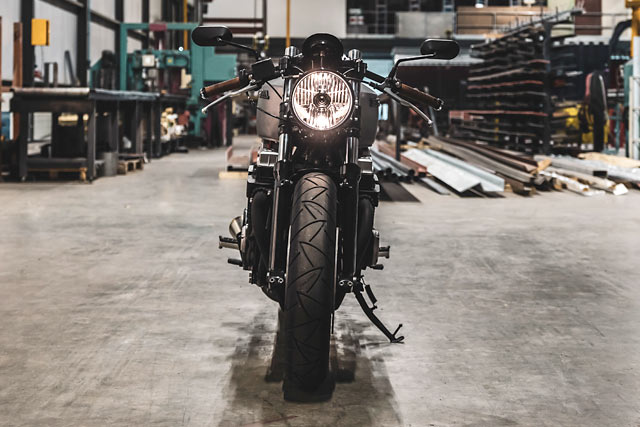 “Like many customisers, we have a big crush on the 70’s Honda’s, however we also do like to take a corner now and then and brake when necessary. We all know how those old timers are with handling and safety. Lucas, the owner agreed.” So it was decided; the modern Honda would be made to look more classic in a kind of reverse restomod process. The look they were going for was a rough, bare metal feel. “This would add to the bike’s ‘Jekyll and Hyde’ vibe,” says Take. “Cornering like a boss, braking like a howling wolf and with state-of-the-art electrics, all in a package that looked like it was made in the Seventies.” 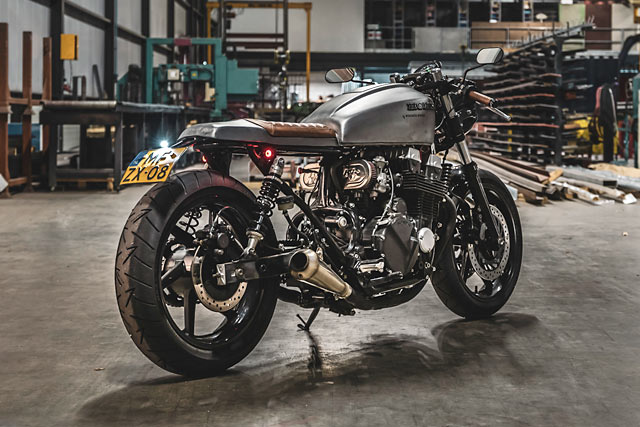 Soon that pristine donor was torn down and the Wrench King’s team got to work. “First we removed all the unnecessary parts until we only had a frame on wheels with the engine in it.” It’s here the magic starts to happen; with the factory detritus gone, keen peepers can start shaping the lines of the finished bike. “By lowering the front forks and cutting off the old rear frame, the bike immediately starts to look better and we can make sure that the old ’70s CB tank we sourced fits well on the frame.”

[superquote]“It’s here the magic starts to happen; with the factory detritus gone, keen peepers can start shaping the lines of the bike.”[/superquote]

Meanwhile, Joost – Take’s partner in crime – had already started with plans for the rear end. “At first I was really having trouble designing the rear. But as soon as we had the tank in place, we both knew how it had to look. All the lines in the tank needed to be resolved in the rear end. That’s where the mission started and the days got longer and longer.” 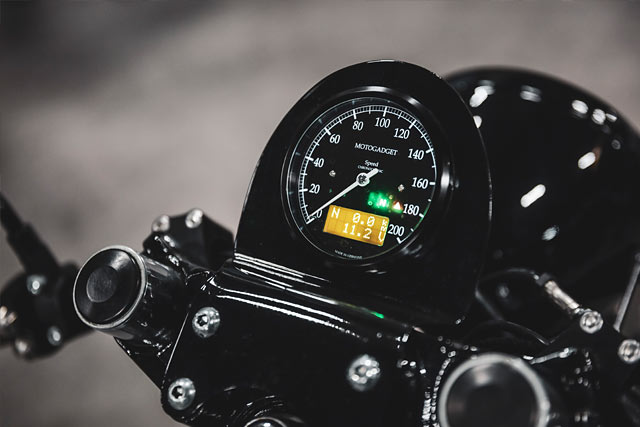 “After we’d finished the tank and the rear end we broke down the bike again and started grinding everything until the frame was as smooth as a baby’s face. All the steel parts were sent to the powder coater and then we focused on the power plant. It was fully serviced and restored before we repainted it. As soon as we had all the parts back in, we started with building up the bike one last time. Our friend from Miller seats provided us with the beautiful, slim seat you see here. 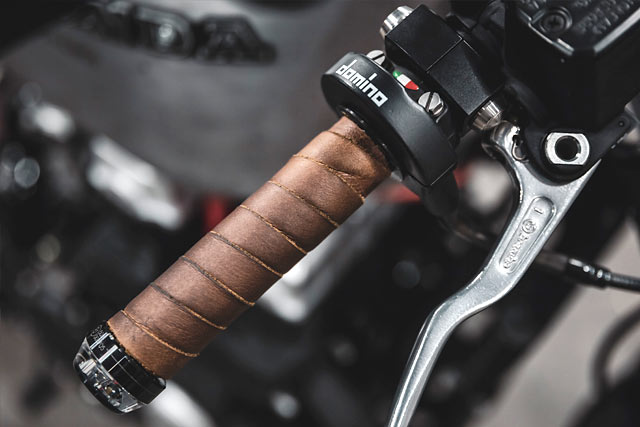 With the end in sight, the electrical were commenced. Mounting the obligatory Motogadget M-unit Blue along with a GPS tracker and some all-new wiring to get them playing nice together. Next came the paint job. ‘What paint,’ we hear you ask? “As you can see on the picture it all looks pretty rough and old-school but it wasn’t like that at all. We sanded the raw tank and rear end, giving it some horizontal scratches. We then covered them up with a black layer of paint and sanded it off again so it was only filling up the scratches. Finally, we gave it a matt clear coat.” It always amazes us how much hard work it takes to make something look old and neglected. 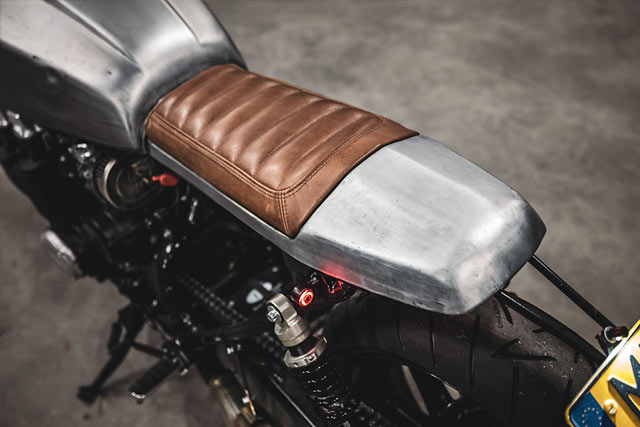 The finishing touches included a Domino throttle and clutch lever, a Brembo master cylinder, even more Motogadget gear in the form of bar-end indicators and a speedo, a custom stainless exhaust system, upgraded YSS rear shocks and 2-into-1 K&N air filters to make sure those good ol‘ 90s cylinders don’t inject any more grunge than they already had to. And the end result? We’re guessing that somewhere in the Netherlands there’s a very happy Honda owner who’s now got the retro looks he was craving without those infuriating 40-year-old bugbears to go with them. Enjoy the ride, Lucas. 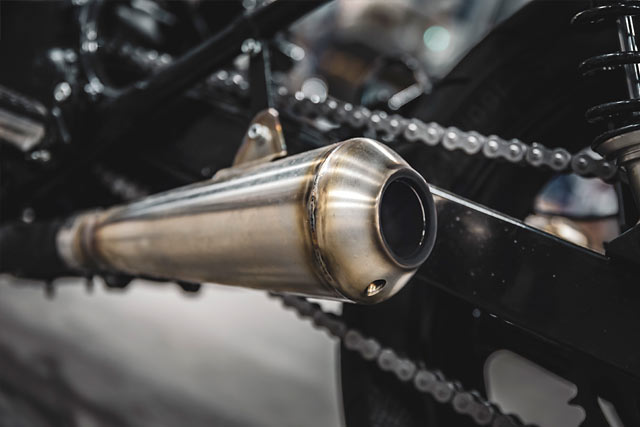