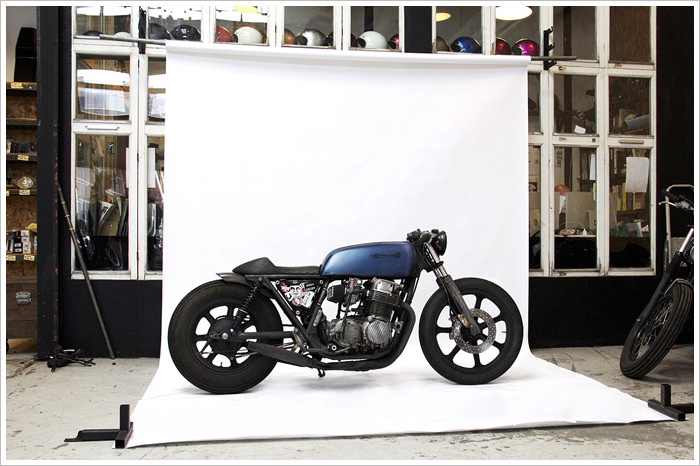 Recently the Wrenchmonkees (WM) decided to put down their wrenches, pack their duffle bags and hit the freeway to do what we all love to do – ride. “For the last four years we have been wrenching all the time and spending too little hours on the road” says Nicholas from WM. “That will change now”. The problem was Nicholas needed to build a bike really quickly with as little money as possible for the trip. “The donor bike was bought cheap and I didn’t have any money to use on the bike, of course we did it all ourself, but due to the lack of money reserve in the company I couldn’t afford to renovate the engine, and the whole bike was put together the last few days before our Monkee trip.” It’s definitely not the most beautiful bike the monkees have built but what it lacks in beauty it makes up for in character. Meet the “Scratch Monkee”… The dirt cheap donor is a mix of a 1976 Honda CB 750 K6 and 1977 Super Sport. The frame was slighlty modified with a Kawasaki swingarm. LESTER cast aluminum rims 16″ + 19″ with Firestone 16 x 5″ and Avon Speedmaster 19 x 3,5″. The monkees decided to test these vintage tires that so many people love to hate – we havent heard the results but from the sounds of things they. The brakes used were Brembo 4 pot caliber and Brembo 16mm brake master front. WM Garage made the battery case and the license plate/rear light holder, clip on’s and a bracket for the front caliber. The monkees also made the cafe seat and of course did all the wiring. They even threw in some Halrey parts for good measure – Sportster mufflers and cut down Sportster rear fender. No paint job, just clear lacquer on bare frame and the original blue tank. “Paint job will come this winter, need donations from family” says Nicholas. Some other features include Keihin CR Carbs, KN Filters, Bates style headlight and Tarozzi footpegs. Nicholas had the bike finished just in time for the sweet ride from Copenhagen to the South of France. “I rode the bike 2800 Km, from Copenhagen to Narbonne in rain, thunder and sun, and the only problem was rust in the tank.” This was their first trip testing the new Wrenchmonkee gear and also seeing how those vintage Firestone tires stack up on long rides – we look forward to seeing those results. “We try to document the trips, the fuck-up´s and the good times along the way.” The first video of the Monkee ride will be released soon.