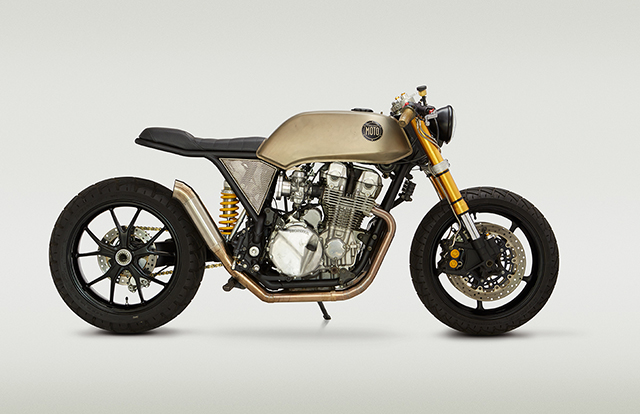 Custom motorcycles often leave an audience profoundly polarised, while some lavish praise others ridicule and scoff. It seems the further from sedate you go the more divided the opinion, but designers like Terblanche and Tamburini have shown that is not always true and great custom builders can do the same. Create amazing one off motorcycles that receive almost universal acclaim, are anything but bland and always show off that signature style that lets you know the brains behind the build. Enter John Ryland, Classified Moto and a Honda CB750 known as Mr Hyde.

I always eagerly anticipate a new build from the Richmond, Virginia based workshop and this 1992 Honda CB750 Nighthawk certainly doesn’t disappoint. Customer Jordan had seen a pre-Nighthawk CB750 build of Classifieds called the SuperStrada and wanted something in the same vein. The first thing that hits you in the eyes is the single sided swingarm and this is certainly no bolt on conversion. While the Ducati Multistrada swingarm remains stock the Honda frame required considerable fabrication and welding expertise from Seth and Danik to get the two working in harmony. The Showa shock originally fitted to the Ducati remains in place while just like SuperStrada the rear wheel is from a Ducati 1098. The front end is equally as accomplished and it’s rare to see a Classified build that doesn’t feature a variation of an USD fork, Mr Hyde is no exception. Donating its forks, lower clamp and front wheel is a late model Yamaha YZF-R6R that brings handling well and truly into the 21st century. Finishing the conversion is Classifieds very own billet aluminium upper triple clamp. With the R6 also kindly donating its controls the front of the bike was nearly complete. But never ones to dodge a challenge the decision was made to bring even the speedo into the 21st century, no dials here as an iPhone mount was carefully CNC’d and a GPS based speedo app takes care of the display. Adding function to the perfected form is a 12v accessory port to keep the iPhones battery at full charge. At this stage of the build Mr Hyde appears to be quite similar to the bike that inspired it, the SuperStrada. But Jordan had a request, occasionally he wanted to be able to ride his custom “two up”. So unlike the last CB750 build upholsterer Roy Baird shaped the rear of the seat to accommodate a second person and no metal fairing was added. What makes this addition to the build truly exceptional is the set of passenger pegs that sit below the swingarm; Want to ride solo and remove the sight of the second set of pegs? Easy, they’re removable! While many will automatically assume the fuel tank is simply a Classified Moto’s bare version of an earlier CB750 it is actually from a CB450T Hawk. Matched with the handmade seat, the tanks proportions work perfectly with the later model Honda, both merging at the halfway mark of the frame giving a visually satisfying balance to this urban brawler. It’s these touches that make John such an incredible designer and when the bike makes its growl from a sweet four-into-one stainless exhaust fabricated by Seth you can start to see why the Classified Moto team have taken the motorcycle world by storm and have celebrities knocking on their door. Now with the Honda in Jordan’s hands, the malevolent Mr Hyde is free to take to the Jersey jungle and do all the things so many of us wish we could do on a Classified Moto build; Hold it open and hang on!