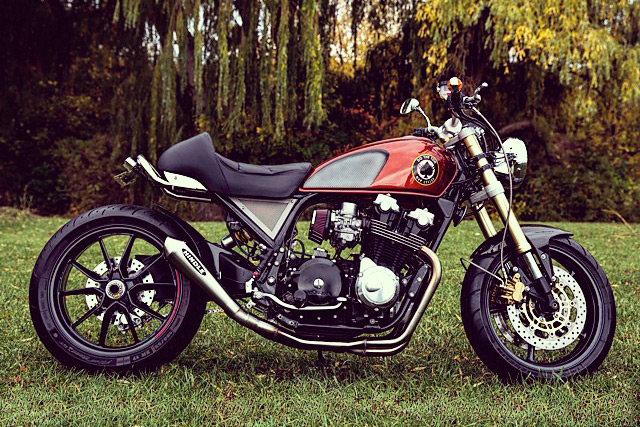 Whether we’re in the back shed tinkering with our bike or blasting down the road there is a freedom and stress release to motorcycling that cannot be denied. But when your job is literally keeping people alive while they undergo heart surgery the need to relax after work becomes that much more important and so it is that Nicolas Vincent Perna a Cardiovascular Perfusionist from Canada spends his winters building a different bike each year. Nick has a love for low mileage classic Honda’s but having been born in Italy just south of Rome he has a soft spot for the Bologna beasts too. So when he tracked down this 1982 Honda CB750 with just 4000 miles on the clock he saw an opportunity to create one very special Honda with some Ducati sauce and a side of Britain’s best for one hell of a ride. For the single sided swingarm conversion Nick found a near new 2012 Ducati Monster 1100 Evo and was able to secure the entire back half of the bike, a very clever decision as retro fitting other components can become very tricky. Fitting such a unique and far more modern swingarm to an older frame leaves only two options for fitment, modifying the frame or modify the swingarm to fit. Nick chose the latter and it’s a sensible choice as such changes at such a crucial mounting point can drastically alter the integrity of the frame. Also a more than handy woodworker, he’s built all the furniture in his home, Nick knows the importance of measure twice cut once (He measured a lot more than twice). Knowing the exact figures he machined the swingarm down removing a few millimetres of material from each side and using custom bronze shouldered bushings fitted the Ducati rear into the Honda frame with the standard axle. With such an impressive rear the front could hardly be left standard and Nick didn’t settle for anything less than the quality 41mm Kayaba telescopic USD forks from a 2012 Triumph Street Triple. The new rear increased the wheelbase by 1 inch while the bike is now 2.5inchs lower overall and it’s safe to say the handling is now light years ahead of a stock ’82 Honda. Having acquired the new front and rear as complete units there is also the advantage of their modern lightweight wheels and quality braking equipment. Up front the cast aluminium Triumph wheel is pulled to a halt by twin 308mm discs with two piston calipers. The rear Ducati wheel is also light weight alloy and provides a Single 245mm disc with a two piston caliper for stopping power. The modern componentry and quality Michelin rubber not only looks the business it works amazingly well too, with Nick reporting the bike to track dead straight and eat up the miles with ease. Powering the 1982 Honda is of course the legendary air-cooled four-cylinder that made the CB750 such a legend, this later model example being the DOHC 16 valve version. With the big ugly airbox gone the bank of four 30mm Keihin carburettors now breathe through a set of aftermarket filters and the crank case breather has been given the same treatment. But the pièce de résistance is that exhaust system, the CB Honda’s have always responded well to breathing modifications but Nick has taken that to a whole new level. Kemp Archibald of Ripple Rock Racers helped to organise the one-off custom system built by Hindle Exhaust Systems for the DOHC motor, a first for Hindle. Fabricated from ultra-thin wall stainless the entire system weighs just 2.5kgs and the finishing touch was done by Mr Lang Hindle himself. With the modifications to the downtube the battery and associated electrics are now hidden away under the seat and along with the refinished engine makes for an extremely tidy look. With so many modern touches and high-end technology the original character of the Honda shines through in the visuals, the new rear hoop finished in chrome a nod to the touring-cruiser the CB750 had become in the US by 1982. The seat itself is standard, albeit with a host of customisation by Nick who insists on a saddle that can keep him comfortable for hours at a time. Reshaped and recontoured before being recovered it retains much of the visual appeal of the standard item with a nod to café racers in the rear hump. The custom paint on the standard tank really hits the mark, the painted on knee pads give a unique touch and the finishing piece are Nick’s own NVP Cycles logos. The standard plastic side panels are long gone and in their place is stainless flat bar with stainless perforated sheet covering, tigged together before being sandblasted and given a coat of clear. Controls are a mix of old and new, the flat bars and risers are part of the Triumph front end from the Street Triple, while the switchblocks are classic Honda. Some may have been tempted to use the alien eye headlights off the Triumph as well but it only takes one step too far to ruin a build and Nick got that balance just right with a classic big single unit. Instead that more modern touch is saved for the rear end where twin clear taillights with a numberplate holder look right at home hanging over the trick Ducati swingarm. Keeping it all legal is the single mirror and the two bar end amber indicators that give a hint to a way Nick rides. Sat up on his comfy seat in style, that Honda four barking through the stainless pipes with every crack of the throttle and when the twistys come it’s time for a little fun as Triumph, Ducati and Honda grip the road giving a sure sign those long Canadian winters are over and our medical mechanic has the sort of down time he deserves.