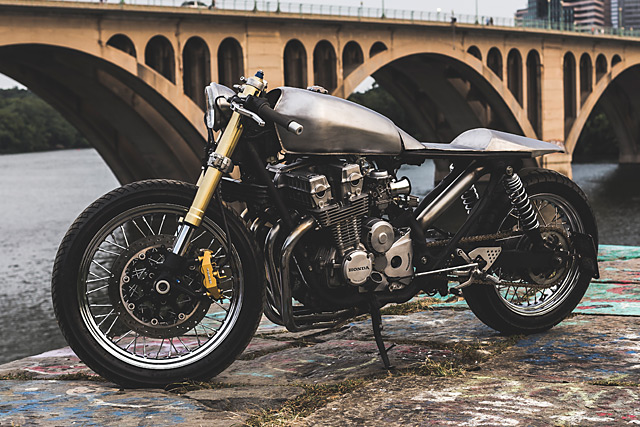 A great custom bike is more than just the sum of its parts; it tells a story about the life and times of the machine and its builder, woven together by the dreams and desires of the one who will call the keys their own. While some builders clock on and clock off, others truly live what they do and that is abundantly evident in this café’d Honda CB750 RC42 with more than a little ole school dragster appeal created by Wesley Kim of Rumblesmith in Maryland. Wesley was visiting the Blockstar Car Shop and the owner Bobby when he noticed this Honda gathering dust in a corner of the facility. Over a number of conversations potential and plans for the bike were discussed before Wesley presented Bobby with some drawings of just what the old CB could be and that was enough to get the build the green light. Unlike early incarnations of the CB750 the frame doesn’t lend itself well to bolt on modifications, in fact the lines are anything but conducive to a sleek look. So with the bike completely stripped down Wesley threw the frame in the jig, removing and cutting everything behind the motor. Only the lugs for the rear shocks were kept so they could be used later on and they were added to the now tubular subframe that makes up the rear of the bike. One of Bobby’s few requests for the build was an extended swingarm, so rather than use an item off another machine that may or may not work, Wesley acquired another CB750 item and sleeved the two together. Extended swingarms invariably give a drag bike look and cleverly moving the shock mounts forward retains the original geometry of the bike while giving the long low look. Those shock mounts now hold a Progressive suspension setup capable of hard launches and cornering prowess. If Café Racers and Drag bikes can share a common component it’s the fitment of quality inverted forks, in this case 25th anniversary GSX-R 750 items, complete with dual Tokico 4 pot calipers. But modern forks like that don’t just bolt up, bearings need to be changed and for this conversion a custom fabricated steering stem was also required. Ditching the heavy cast wheels was an easy decision, replacing them required some out of the box thinking; wanting a spoked look the rear rim is now a 40 spoke 17” wheel from a 2003 Triumph Bonneville, while the front is a Harley-Davidson 40 spoke 19” that has been rebored and given new bearings for the GSX-R axle. Adaptor plates have been machined to fit first gen Suzuki Hayabusa brake rotors up front with the rear stopping power coming from the Triumphs twin piston caliper. Making final contact with the road is set of the ever popular Bridgestone Battlax BT45’s. With the bodywork the next cab off the rank Wesley decided a sleek and narrow profile would best suit the design he had envisaged. Sitting a small Honda CG125 tank up on the 750 frame gave him just the idea he was after. Although a tank from a much smaller bike was never going to be a bolt on fit, so the entire tank was gutted, a new floor and tunnel fabricated and the petcock fitted in the only location there was still room. The junction between tank and seat is vital, it can make or break the visual appeal of a build and Wesley wasn’t going to cut corners. Instead he took the shape of the rear section of the tank and flowed it into the start of the seat pan and allowed the lines to continue all the way to the rear. With just the slightest of humps for support the end result is a raw knife blade like visual that makes the 750 lump all the more muscular. That engine remains internally stock but they always respond nicely to some well sorted bolt on modifications. It breathes through a beautiful set of aluminium velocity stacks that required a serious rejet. The headers couldn’t be more drag bike, Vance and Hines 4-1’s that flow back to a hand-built slip on made from 304 Stainless Steel that routes through the swingarm and out the left side of the bike behind the seat. With the best part of 30kgs removed the Honda’s performance now more than matches the looks of the build. To get the ergonomics just right Wesley got Bobby fitted up for the bike and ended up coming up with completely new locations for the rearsets, a pair of Yamaha R6 items. The brake side is controlled by a Brembo master cylinder with custom linkages now giving the shift the GP style pattern. The wiring harness has been overhauled and most relocated under the seat pan with the ignition key, and the addition of an anti-gravity 8-cell battery that lives under the swingarm. Lighting duties at the rear are taken care of by an all in one LED strip that handles turn signals, brake and running light, poking through drilled holes in the seat. While a café racer friendly single headlight illuminates the road ahead as the CB thunders towards its destination. With that the bike was finished, there is no seat padding to cushion the ride, no paint or filler to hide welds or errors in fabrication. To do so would have allowed corners to be cut, a close enough is good enough attitude to be taken and craftsmanship left at the door. And that’s just not what Wesley is about, he’s a builder, a fabricator and a designer. He builds motorbikes because that’s what he loves, the raw, unadulterated appeal of quality components and brilliant craftsmanship that combine to deliver Bobby a CB750 like no other. It’s automotive purity in its finest form, the touch of metal, the sight of a working machine and a bike that looks as bad ass as it sounds.