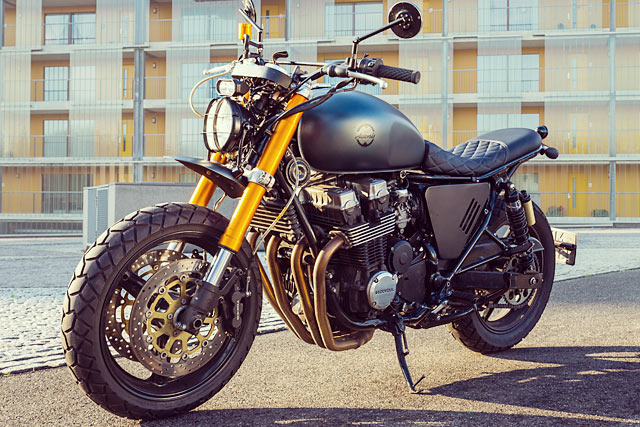 Americans don’t know how lucky they are. It seems to us outsiders that you could weld a set of wheels to an Exocet missile and it would still be considered a roadworthy bike in all 50 states. But for the rest of us – especially those in the EU – there’s an army of engineering bureaucrats with micrometers ready to slap down custom bikes at the blink of an all-seeing eye. So maybe it’s time to praise the quite, practical customs; those that intentionally fly under Big Brother’s radar. Exhibit A is just that; a subtle yet superb Honda CB750 from Dutch bike builders, Moto Adonis. “I met Daan from Moto Adonis a few years ago,” says long-time friend and first-time customer, Wouter Buningh. “We immediately hit it off chatting over motorcycles, so I started following Moto Adonis on Facebook and visited his shop every once in a while. I saw all kinds of projects through the years; they just seemed to get better and better with every new build”. Inspired by all kinds of custom bikes, Wouter started drawing sketches of his ideal ride about three years ago, just putting on paper how he thought his bike would look. After a while, he knew exactly what he wanted, and he was pretty confident that Daan would be able to convert his pieces of paper into reality. “I wanted to strike a balance between something that was pleasing enough to be put on display at a bike show, but also practical and subtle enough to be ridden through cities and forests without too much hassle. There are a lot of show bikes out there that truly look marvellous. Sadly, they can’t be ridden for more than an hour. I think that Moto Adonis have proven themselves to make bikes more like the former, so I trusted Daan knew what to do”. After a few sessions with the Moto Adonis team, they came up with the ideal donor bike to match Wouter’s wishes; a CB750 from ’92. Small frame. Big engine. A good length and enough horsepower to keep things interesting. He stipulated an USD front fork, a gas tank from a Bonneville and the rest was up to the Adonis boys. “It took me ages before I actually bought one. I made the purchase after Daan said I should ‘just do it and get the frickin’ project started already’. Point taken“. He bought the bike and slaughtered it the very same week.

Even though Wouter had a very detailed plan of how his scrambler was supposed to turn out, Daan still found enough room to improve the project and Wouter was (thankfully) open to suggestions. “Design implications, like how the seat would look and function, were very important in creating this bike. The end result is a long seat because I wanted to be able to ride two-up. So Daan took the brief and designed the seat in a way that makes it look shorter than it actually is”.

[superquote]“And of course, there’s that gunmetal grey Thruxton gas tank… So much for subtlety; it looks downright gorgeous”.[/superquote] Then came Daan’s time to shine. “With Wouter happy, it was over to us to actually make it. We started with front forks from a Suzuki GSXR750 SRAD and redid the gold and internals so it looked and felt factory-fresh. This Suzy fork upgrade also added new brakes and a new front wheel to the Honda”.

In quick succession Daan also added new ‘bars, twin Daytona instruments, a single side cover, some fenders to keep the aquaphobic happy, a tool roll that was a present from the owner’s new bride and a fresh set of Continental TKC 70s front and rear. Then there’s that gunmetal grey Thruxton gas tank with the go-faster stripes. So much for subtlety; it looks downright gorgeous.

“It turned out to be exactly the bike that I drew and more,” says Wouter, clearly over the moon with the results. “Daan is very talented, but he’s also very honest. If you come up with an idea that is probably going to suck, he will tell you just that. Even though I’m a control freak, I didn’t mind letting some things go to let Moto Adonis do their thing. I said that I wanted a subtle, good-looking and practical bike. Well, I’ve already hit dirt roads, asphalt, cobblestones and city centers. This Honda handles it all perfectly“. Wouter’s only regret? It was that once the project was finished, he instantly felt like starting another one.