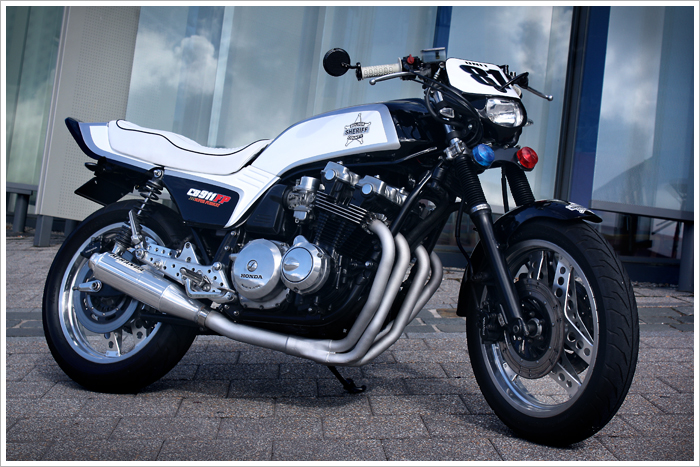 A bus driver called Simon Whittaker from Canberra (Australia’s Capital city) recently sent us some photos of his motorcycle collection and we instantly hated the guy. He had the dream garage. In his possession was one mint bike in every different style. He had a bobber, a couple of stunning café racers, a street tracker and this sheriff inspired Bol d’Or he calls ‘Mr Meaner’. “I do split shifts as a bus driver which gives me a few hours a day to work on the bikes” he says. It’s amazing what can be acheived with little money and a few hours a day when you think outside the box. We asked Simon how the bike came about and this was his answer… “It started with an ad on all classifieds with a guy selling two 900F boldors project bikes. I got him down to $800 for both. One was already in bits and the other was a roller. I took a couple of mates with me and loaded it all up. Within about an hour of getting home we had the rollers engine going. The basket case parts were sold on ebay over a few months so I got my money back and a bit more. Some weekends in the shed and I could finally ride it after I swapped out the clutch with the good one from the spares. I thought about doing a Black/White paint scheme at first and let my creative flair flow and decided to do a kind of ’80s cop/sheriff theme mainly ’cause I thought it would be a laugh. “The aim was to give it a quick make over as by then I was up about $300 from the purchase price! I utilised a mate, Craig Crawford who owns C&D sheet metal in Queanbeyan. He let me use his workshop to make a rear splash guard from checkerplate alloy, and a stainless strap for the tank, using his hole punch machine and rollers. Also he gave me a hand to weld in the pop up fuel cap. I modified the rear tail section to take a led tail light and made a plate to cover the back of the plastic duck tail where the old tail light went. The front headlight is a generic trail bike one mounted using a spare original bracket, I also fabricated a small dash for the idiot lights using led replacements. Clip-ons were off another Honda, $10 at the Goulburn swap meet. The front end was reconditioned with new seals & oil, plus a set of universal fork boots. I stripped all the bolt on stuff from the frame and painted in gloss black, removed the engine covers and polished them up at home along with the rims. It was starting to look pretty good by now and everything was ready to paint in 2 pack. I got the boys at Edwards spray south, ion Tuggeranong to mask it up to look like the original 2 tone red/white then had another friend, Craig Helmers at Choice signs to make up the decals to my design. I came up with a Sheriff, Bol D’or County logo and John Watkins remade the seat in white to match. A set of white skull grips and carbon look bar end mirrors, blinkers and vinyl for the tail section finished it off. An old 40’s police siren from ebay was hooked up along with an ear cannon air horn, flashing lights from Jaycar mounted on a home made bracket and she was ready to hit the roads. All up it took about 3 months to finish. It certainly turned heads and even fooled a few people too.”

We have a feeling Simon doesn’t take himself to seriously because this build has fun written all over it – even down to the CB911 badge. This is only an entrée of Simon’s work and with so many beautiful bikes in his greasy little hands, we’ll definitely be sharing a few more bikes from this talented bus driver.