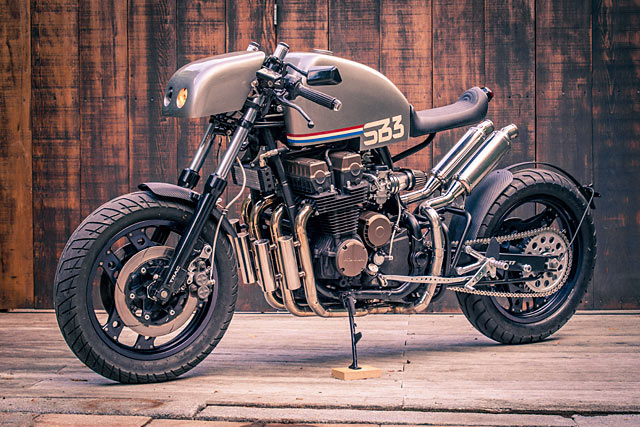 Igor Teeken has been a motorcycle addict for as long as he can remember. “I was drawing motorcycles with my friend Jos Deckers in primary school; a hardtail Harley as I recall.” In his pre-teen mind, that was the absolute coolest bike he could think of. “Then I bought my first bike on my 17th birthday. I started with some Honda XLs and then moved on to a CBX750F, a Suzuki DR-Big and some big cross-Europe rides. I welded up new subframes and luggage holders at the blacksmith’s were I was working at the time.” 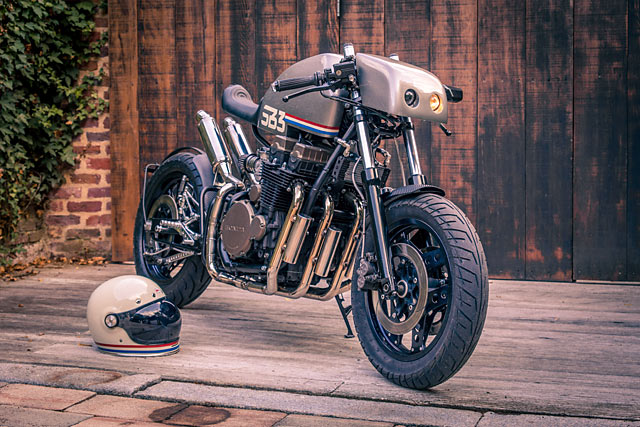 Although he makes his living in the air-con trade, Igor built a workshop at home so he could create the things filling up his head. “I had an intermezzo with wood for a while but I’ve been back in love with steel for a few years now. With the practical knowledge gathered in the past, I’ve built a few bikes. I called them Signbike 1 and 2 because my last name means ‘sign’ in English. 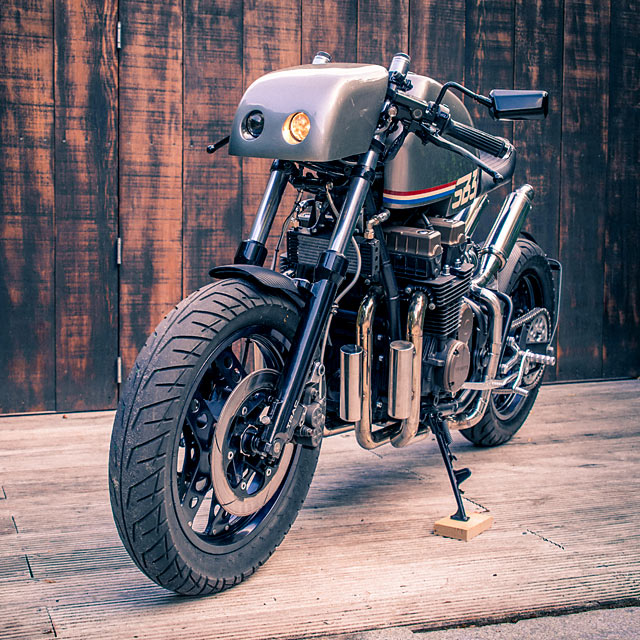 Igor had so much fun racing his previous bike at Glemseck 2016 that he bought a worn out bike 4 days after the race and immediately started to build the Signbike 3, a.k.a. ‘SB3’. “I found the bike just 30km from home, but in very bad shape. It had been standing outdoors for ages, but thankfully it ran after connecting it up to a car battery.”

The SB3 is a ‘retro tech-style cafe racer’, specially built for the 1/8 mile sprint at Glemseck. It’s a 1984 Honda CBX750F, just like the first bike road bike had 30 years ago. “I wanted to race the 1/8 mile on something really different from all the others. It was a challenge to build a four-cylinder bike that would have a chance against the two cylinders on the 1/8 mile; because of the relative lack of torque, I decided it should be longer and lower.” 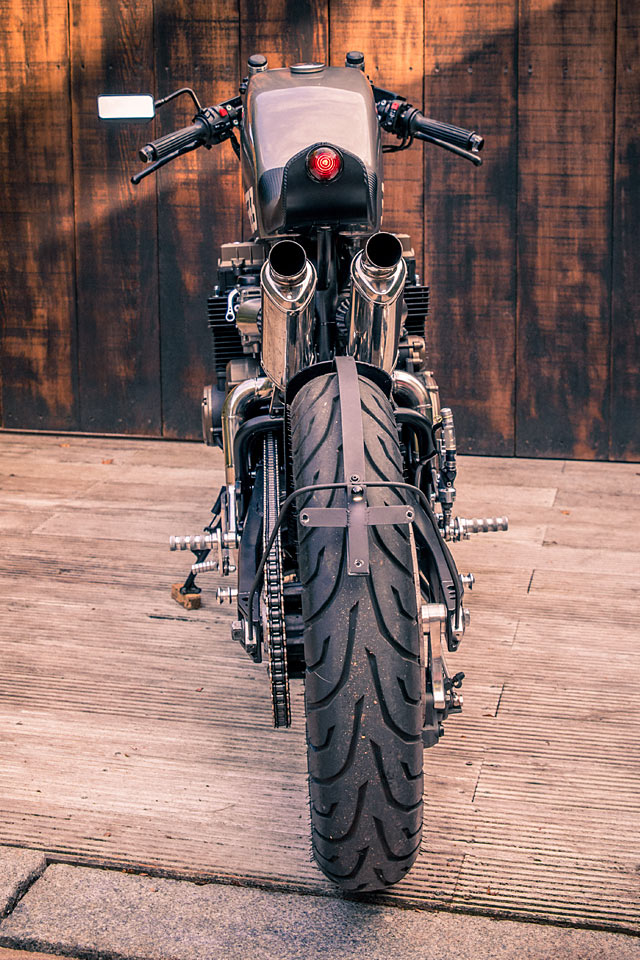 “All the electric parts are located in the handcrafted steel headlight nacelle to minimize cables and other ugly stuff. And the battery is hidden in the petrol tank.” But for the rest of the bike’s mods, Igor was really focused on lines and symmetry. “The upper line of the rocker cover is the bottom line of the headlight, petrol tank and seat. The petrol tank matches both the angle of the front suspension and the frame. The upper line of the headlight follows the tank and seat. The curve of the headlight can be found upside down under the seat.” Phew. It sounds like a lot of maths, but the equation for the rear swingarm was a simple one. “I made it 60mm longer,” says Igor. 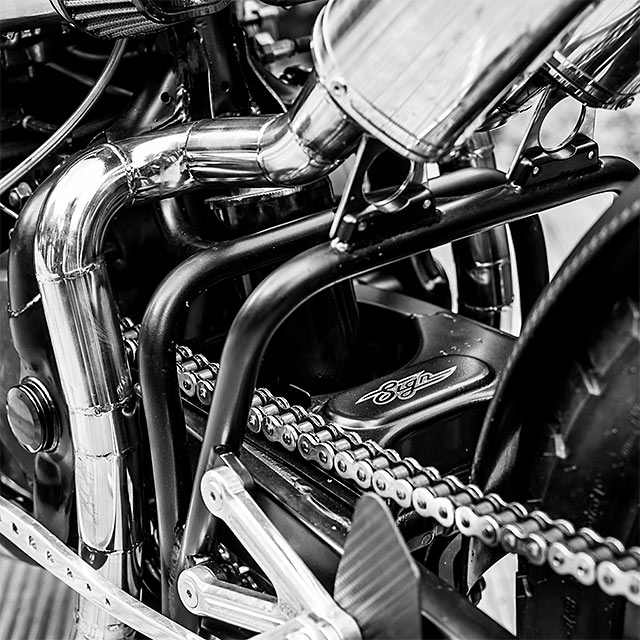 But the most interesting feature of the bike would probably have to be Igor’s experimental exhaust set-up. “Each cylinder has an expansion vessel; this was needed because the handcrafted stainless 4-into-2 exhaust didn’t have enough content and I wanted to keep the two silencers relatively small, as I wanted them to remain free-standing on a special subframe that also supports the rear sets.” Note the way the pipes run through the frame without sticking out and how the silencers are angled to match the rider’s upper leg.

[superquote]“But the most interesting feature of the bike would probably have to be Igor’s experimental exhaust set-up.”[/superquote] 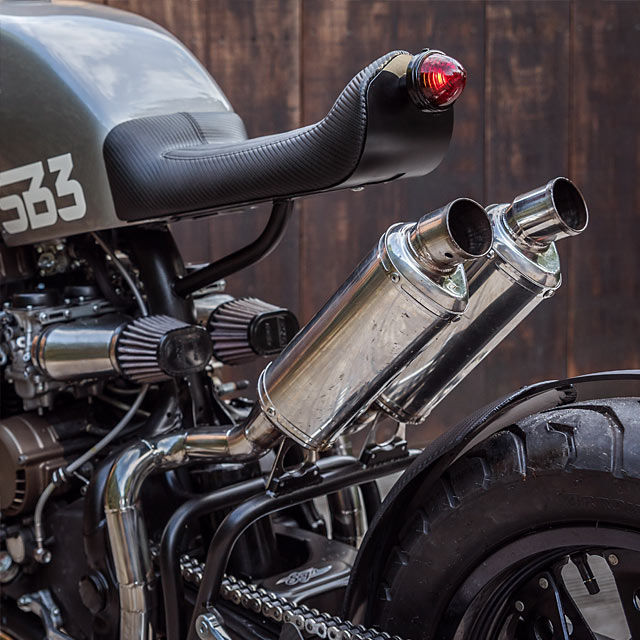 “The wires of the license plate light are hidden in the small supporting tubes and are then routed through the rear swing arm. The rear caliper has moved from the top to the bottom for optical and mass centralisation reasons. The tail light is from an old car; I purchased it from a collector. No modern bulb would fit, so I engineered an LED that does the trick as both the tail and the stop light.” 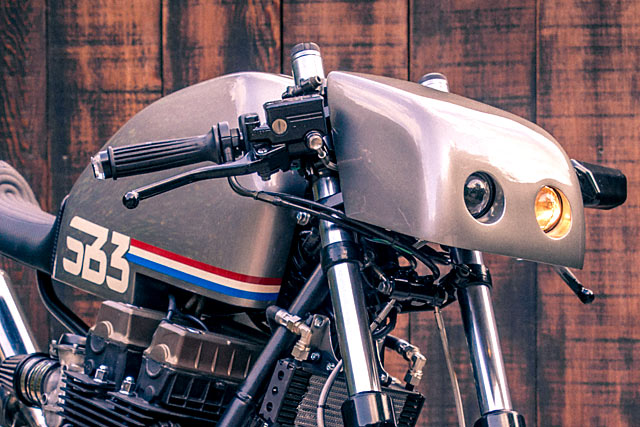 Igor notes that the four stainless exhaust reservoirs were a lot of work as the tension from the welds initially made each one slightly different from the rest. “Also, I’ve never made a gas tank so that was also a challenge, especially because I had to cut it in two after finishing it to weld in the plate for the battery compartment. It was all very informative and lots of fun to do.”

“Choosing the colors was the hardest part – there are so many details, I decided to go easy with it. The black of the frame makes everything more balanced, but it also hides one of the best parts of the bike which is the subframe for the exhaust and the rearset. But it worked out well in the end. And I’m very happy with the logo, too. It was designed by my old school friend Jos, who also now happens to be my brother-in-law.”