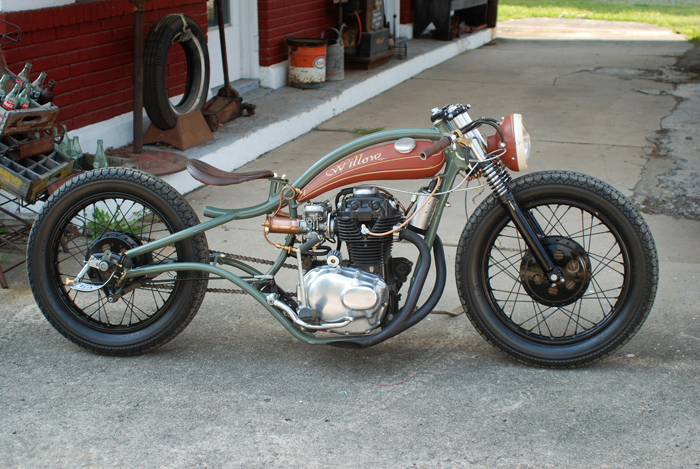 “So why did you name the bike Willow?” This is the first question we asked Troy Helmick, the builder of this amazing bike. “Willow trees are strong but fluid” he replied. Very zen, sensei Helmick. Troy is a retired photographer who now runs an Alpaca farm in West Virginia. “It is my attempt to evoke a picture in a person’s head when they hear a name and then couple that name with the image they see before them in my machine” he explains. This bike was reborn on a farm in West Virginia. Willow started life as a 1974 Honda CL 360 before Troy found her on her side, rotting behind someone’s garage. The build was inspired by the era of the board track racers — they were brutal machines, elegant in their simplicity. The pictures you see before you are Troys redefined interpretations. Photographs and words by Troy…

“The natural tendency that I have is to lean toward the organic side of things. I hand bent all the tubing for the frame to match this thought process. Other pieces were hand bent and forged as well, such as the brace between the chain stays, the headlight ears and, I’m sure a few other bits I’m forgetting.” “The build took me just over a year to finish. It was all hand built in my backyard garage with very limited tools, and an even smaller budget. Through good Friends and family, I have received a lot of thankless help along the way. Doug from DEK suspension in Pittsburgh gave me the idea to use my old rear shocks as external springs on the front. The internal springs were removed and I made adjustments to the oil to allow for dampening changes. Jim at Alchemy Upholstery in Pittsburgh covered the seat for me and a good friend Lee, a machinist from just outside of Portland milled the handlebar clamps. I built the bars and the headlight mounts by hand and welded them together. The grips are tennis racket grip leather. The clutch and brake levers are Roal Enfield Knock offs. They are solid brass but pretty ugly so they received a lot of trimming.” “The velocity stacks were hand built by “Cannuck plumber” who resides in British Columbia. Dime City Cycles now carries the stacks for anyone to purchase on their website. Luckily I got in on the copper stacks as a one off test sort of thing, and I am thankful for that. They turned out amazing.”

“A close friend walked me through building a fiberglass tank. Jim from RivrStyx in Albright, West Virginia is a composite specialist and was willing to allow me to do most of the work and use his shop. He kept me on a short proverbial leash, and I would be a fool to think that I didn’t try his patience at times. The paint is rattle can and Tyler Elliott from TE Customs did the hand pin striping and lettering.” “The wheels received a lot of work, then were drilled for vents and brass screens. Afterwards they were coated with black appliance epoxy. The motor was stripped bare and was coated with high temp paint. The Honda logos were carefully shaved, then the cases were hand polished. The fins on the points cover were shaved, drilled and polished. Brass screen was also used there.” “The coils are Chevy LUV coils fired by a pair of CB750 condensers. Most of the wiring is internal and was soldered together and sealed with heat shrink tubing. The wiring was simplified since there are no turn signals, dummy lights, speedometer, etc. I found a cool little taillight and swapped out all of the mounting hardware with brass lamp fittings from the local hardware store.

I built my own throttle, brake, and clutch cables. The thumb screw for the brake linkage is an extra brass gas shutoff valve. It was disassembled and the valve portion was drilled and tapped.” “After a year of building, I’m sure that there are many, many details that I have forgotten, and I apologize for that. It has been a journey. In the end, like the board track racers of the past, there is not much there that doesn’t need to be. She is slightly raw, but functional.” As this was a bike that was developed from the somewhat zen thought of the strength and beauty of natural forms, we thought it would be fitting to end with an apt and elegant quote from one of the Ming Dynasty’s most famous Zen schollars and teachers, Hanshan Deqing (憨山德清) who famously said, “The fundamental nature of all phenomena is close beside you, but you do not see even that; yet you still go on talking of your inability to see what is far away. And by the way, “willow” is a totally bitching name for a motorbike and any bike that has that name will totally rock. Peace out, mother lovers.” Surely there’s something in that for all of us, yes?

You can check out the full evolution of ‘Willow’ on the Zen Cafe Master site: DotheTon.com. Alternatively, you can view another extensive build thread on The Chopper Underground.