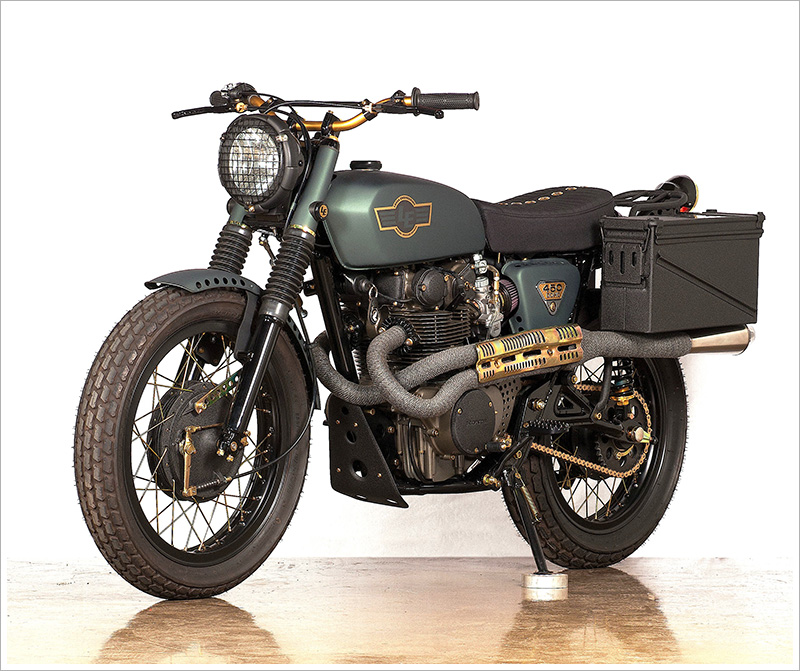 Sometimes, life can really throw nasty shit at you. But one of the nastiest things it can throw is cancer. Jay Lossa from Lossa Engineering has been dealt this card not once, but twice. So when cancer reared its ugly head again a second time, he knew what the best therapy for it was. Build a bike. “I haven’t built a bike for myself in over 3 years” says Jay. “So after a horrible 2012 and getting cancer again, doing chemotherapy, full body radiation and having a bone marrow transplant I was aching to build something. I’d had a bike in my head for years and I was keen to use the build as therapy while I was recovering to get back into the swing of things. Everyone knows me for building café bikes. Well, I actually will build any brand and any model – just as long as they are from the 60’s or 70’s. I wanted to build something I could take off-road or jump off a curb and actually carry stuff with me when I ride.” Jumping off a curb? By the looks of it, Jay has built a bike that could take on just about anything – including cancer. “I bought the donor bike a few years ago and it was so clean I was unsure if I really wanted to modify it. But being someone who can never leave good enough or perfect alone, I had to take it to the extreme. I was collecting many parts for the build over the next few years while it was just sat upstairs in my personal work area. I did a little mock up here and there over the years to dial in some of the parts I wanted to use. Then I started to spend every Saturday just working on the fabrication.” “I basically had to assemble and build the whole bike as it was going to be finished before it was taken apart for all the plating and coatings. The 40 cal. ammo cans were custom mounted with 70’s Hondaline saddle bag mounts that I chopped up so they would come off and on easy. The exhaust had to mount under the left side ammo can and the rear suspension was a lot taller so custom gearing and clearance for the chain was needed.” “Every nut and bolt that I was using had to be accounted for and all the chrome had to be stripped before the zinc plating. After mock-up everything went out to powder coating, yellow zinc plating, anodizing and paint. The ammo cans house solar panels from Goal Zero, they charge a flashlight, run some speakers and they charge my iPhone while I ride. They will charge anything with a USB port.” For those who really get into the details, here’s the bike’s specs. “It’s a CL350 gas tank with a custom Lossa gas cap. There’s 40 cal. ammo cans as saddle bags. A 2-into-1 exhaust with a Lossa reverse cone muffler. Some custom-made headlight ears and a H.I.D. headlight with custom rock guard are up front. Some Mikuni VM34 carbs with K&N pod filters. A gold “O” ring chain. A cut down, shortened seat with canvas upholstery and brass grommets. There’s from scratch wiring with a modern rectifier and dry cell battery. There’s a gold steering stabilizer, billet bear trap pegs and a Lick’s Cycle “Fuck U” taillight. Also, there’s lightening holes everywhere and a custom-made bash guard. Joker Machine supplied the billet levers, throttle, brake strap & axle adjusters. Excell made the high-flanged aluminum rims which we powder coated black. The back rack and the reservoir shocks are custom. The bars are from Renthal. Paint is a 3 stage House of Kolor job with a flat clear. And to finish there’s Dunlop dirt track tires and some Goal Zero modified solar panels.” “The tail light is a model A reproduction from Lick’s Cycle that I bought over 5 years ago, and it pretty much sums up my 2012 and how I felt against the world!” And just to put your minds at easy, we should probably add that Jay is still going strong in 2013. “I’m doing better now. I have some permanent nerve damage which is pretty annoying, but I’m still alive, and can still ride.” Amen to that.