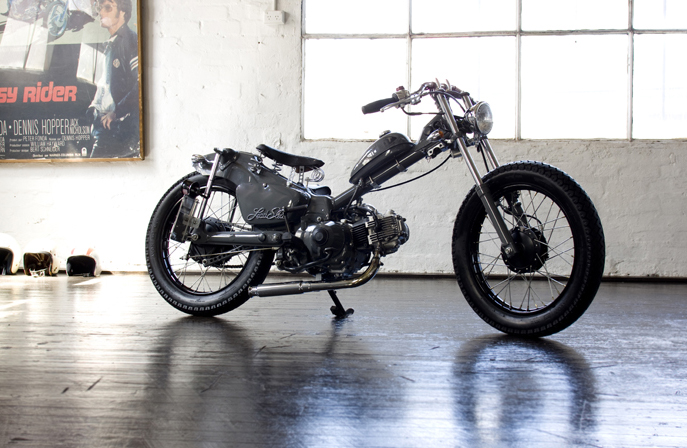 The humble Honda CT110 is one of the most reliable bikes on the planet, which is why Postman use them to deliver the mail down here in Australia. They are affectionately known as ‘postie bikes’ and have always had a cult following but we haven’t seen many customized, until now. A company in Melbourne called Postmodern Motorcycles are turning these air-cooled single cylinders into tasty little customs. The bike above is named ‘Junk Mail’, because it was built from all the junk parts lying around the garage. Postmodern says “The frame was stretched by 200mm, we added a little peanut tank and chucked on an Indian bike seat. There was 2 rear Avon tyres in stock so we used ’em both, on 2 Pak Blak rims. Finally the whole thing was painted the colour of lead”. To see more great CT customs like the Military styled one below, check out the Postmodern gallery. Just like Deus have sparked a new culture of SR400 Café Racers down under, I’m sure we’re going to see many more of these custom CT100’s. [Found on Chalopy]