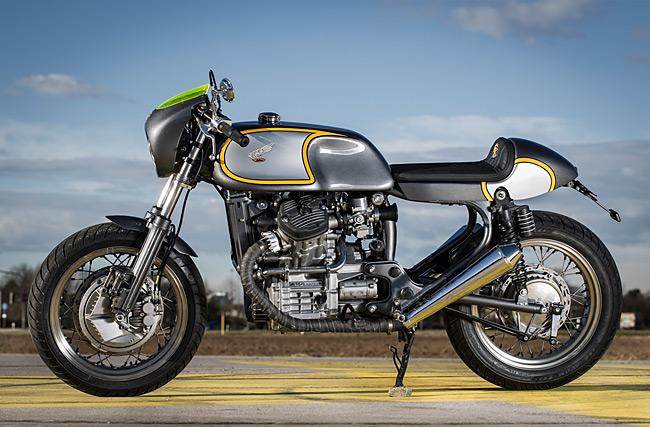 The Honda CX500 has become a staple of the modern Cafe Racer scene, but very few have gone to the lengths that German Heinz Christmann has to make one very special neo-vintage machine. With a ‘79 Japanese bike, plenty of German know how and a cornucopia of the best parts from around the world he’s been able to create a bike that uses pieces as new as carbon fibre and as old as drum brakes. The end result is hard to classify. It’s a Cafe Racer no doubt, but it’s also high on technology while also paying more than a subtle tribute to the race bikes of old. Whatever you want to call it, it’s bloody brilliant. While the CX500 fuel tank can be used on a custom, its sheer bulk just wasn’t going to suit the stripped down racer look, so Heinz enlisted MB Cycles in Heidelberg to make him a one-off tank. There master fabricator Martin Becker set to work creating a tank with both form-fitting functionality and the styling of a 1960’s race machine. The base of the tank is from an old German race bike that uses the Honda tunnel to fit the frame like a glove. From there a hand formed top piece flows like a statuesque body to the shapely sides that curve back around to meet the base, topped off with a Monza cap. The rear end begun with the construction of a new subframe and the removal of lots of unnecessary metal and brackets that would otherwise clutter the lines. The seat was bought as an after market German piece but highly modified to fit the build and then it was time to lay down the stunning metallic grey with yellow and silver graphics. The seat pad was hand sewn in the style of the ’60s racers and one of Heinz’s good friends even made him a small logo to sew on.

There is just something about that engine and it’s no doubt the main reason the CX has come back in fashion; Moto Guzzi looks with Honda reliability makes for one hell of a combination. The 80 degree twin may not make the horsepower figures of many newer machines but it more than makes up for it with gobs of torque all the way to redline. To increase power the standard exhaust has been ditched along with the heavy collector box and individual pipes that are both coated and wrapped run back to a pair of chrome up-swept reverse cone mufflers. Ditching the huge factory airbox also frees up weight and power and the rebuilt 34mm Keihin carbs now breathe through a pair of throaty velocity stacks. If there has been a legitimate criticism of the CX500 engine it’s all the plastic covering that Honda threw at it, Heinz has done away with it all. Then coated the valve, clutch and oil filter covers in crinkle finish grey, painted the radiator to match the body work and installed new chrome piping and hoses that make for an ultra clean finish. When it came time to update the suspension Heinz stayed period correct but opted for the front forks from a CBX550F which have Honda’s patented air assisted anti dive technology. They might be a thirty year old design but they were revolutionary at the time having undergone thorough testing at the legendary Isle of Man TT mountain course, proving brilliant on the slow Gooseneck, stable through the massively fast Windy and handling the high-speed bumps of Kepple Gate without a stutter. To bring the rear end up to scratch Heinz fitted the remote reservoir shocks from a late-model Kawasaki Z750 Zephyr. Having utilised the 550F forks it made sense to use their other brilliant feature, the twin 230mm discs with two piston calipers that are hidden behind vents styled to look like a leading drum brake. It’s a brilliant way to achieve a historic race look with the performance benefit of discs and with weight now just 170kg the factory 160mm rear drum is more than adequate for the rear end. Having come so far in creating a historic racing look the very eighties Comstar rims of the CX or the frankly horrific rims on the CBX would never have suited the look. Instead Heinz contracted German wheel company TTS to create a spoked set of wheels using new rims and adapting the CBX front hub and CX rear hub. To achieve this special ring adaptors were made in Sweden that bolt to the hubs and then clasp the spoke necks.

Both new 17inch wheels were trued and balanced before Avon Roadrider rubber was fitted, 120 at the front and a chunky 140 section on the rear. Covering that front tyre is a paint matched hand-made fender that is held in place by a drilled fork brace for extra front end feel. There is no rear fender, but between the seat base and the new license plate holder from Rizoma there is more than enough to keep the law happy while maintaining a sleek look. The factory wiring on the early ’80s Honda’s can be less than clean but Heinz created a brand new loom and along with a Li-Ion battery is hidden under the seat on a carbon fibre base. Steering duties are given to lightweight LSL clip-ons that wear vintage grips and levers and join the most simple of switchblocks. A quick action throttle from Muller is mounted inside the bar for an ultra clean look and with just one mirror and the front ends master cylinder it’s as close to a race bike as you can get while maintaining a level of street functionality. The headlight surround is perhaps the ultimate in neo-vintage styling, modelled on a historic race bike it uses a carbon fibre backing plate to support the modern green mini shield, all of which hides a big dollar Louis speedo. A bike built to this standard is easy to step back and admire, but if there is one thing it does better than its looks it’s being ridden… and hard.