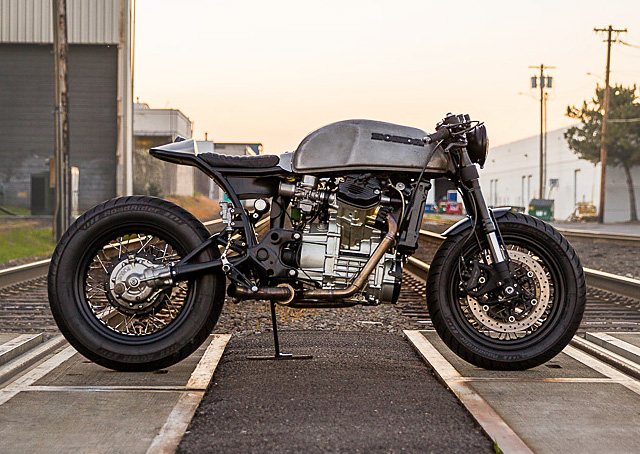 If you’re a regular Pipeburn reader, building a custom Honda CX500 might seem like a task that’s easier than not winning the lotto. But don’t let the pixel mirage fool you; it’s actually a really tough gig. You need a steady eye and a solid understanding of proportions to keep the bike from looking like a half-turned transformer. It’s clear not every builder can avoid that pitfall. This highlights why some CX500’s have it, and others just don’t float your metaphorical boat. The trick is to keep the quality high and the lines clean, which just so happens to be exactly what this bike, Josh Deardorff’s One Moto Show entry, did. And how. Before we get lost in the sweetness of this build, let’s cover off a few key points. This Honda CX500 build started off as 9 totally different bikes that were transformed into one. This is no easy feat unless you’re driven by pure passion to try it, regardless of the nay-sayers. With a beefier front end, this CX500 immediately captures your attention. A quick glance might lead you to assume that it is stock. Fortunately you’d be wrong; it’s from a ‘08 CBR600rRR that’s been mated with custom spindle to the CX frame. Knowing how to tweak a bike until it oozes class takes time. Josh has owned the CX500 for about 3 years now, and for the first year it sat in numerous crates and boxes that were hidden all around his home. At the time of purchase Josh hadn’t been big into riding, so technically this was his first bike and build. “Originally, the price of the bike caught my eye. I had recently been turned down for financing by Harley and was cruising Craigslist for pretty much anything. Finally I saw the CX500, did a quick Google search, and came across the Wrench Monkees build. I liked the look of their bike and after a little research, I decided it looked like something that I could achieve with some after-hours time at the shop I work at.” So Josh decided to go for it.

The bike strikes us as a classy, every-day rider that could easily be overlooked by the unaware. But for the locals who love bikes, their eyes are glued on Josh and the Honda as he slowly brings the bike to a stop in a busy industrial area on the West side of Portland. Even a few drivers stuck in their cars, fighting rush hour traffic couldn’t help but roll down their windows and give him a thumbs-up. We began by discussing how he got into motorcycles. “Up to this point in life, my history with motorcycles was pretty brief, and was only the once-a-year dirtbike or quad trip while growing up. My friend had bought a Harley and was telling me how “motorcycles will change your life,” so I figured I would check into it some more. And the more I started looking into bikes and various builds, the more I felt drawn into the idea of building one. I’ve been in the metal fabrication industry for about 13 years now and I have built and/or worked on a lot of off-road vehicles, but I’ve never really paid too much attention to motorcycles. Aside from the occasional fantasy here and there, nothing had really stuck up to this point.” Apparently that was until the Honda CX500 came into his life. “Almost every part of the bike has been changed or worked on in some way. Detailing the things that are still left from the stock bike would be an easier way to start,” says Josh.

The original frame has been completely modified and rebuilt, with it shortened to get the proportions exactly right. The swingarm is also the original, but has been heavily modified to work with the rear shock and pro-link setup, also from an ‘08 CBR600RR. The engine was complete and had only 1,700 original miles, so there was no need to go into the bottom end. With a freshened top end and a check on the internals the motor was pulled, cleaned by hand, and painted. He decided to take this opportunity to also strip the carbs for a thorough cleaning and re-jet them while he was at it. After dumping the original airbox in the trash, Josh added some more ear pleasing velocity stacks. Not being a fan of the Comstars that normally accompany the ‘maggot’, a wheel swap was next on the list. And as many of you may know, wheel swaps never go as planned. The rear rim is from a 2014 Harley Davidson Dyna and the front is a Harley replica wheel. Having already done more custom work than he thought he would ever have to, Josh opted to retrofit the Tarozzi rearsets rather than build a set from scratch. “The exhaust is completely custom and all stainless, the engine is now cooled by a Ducati fan, and the front hub is a modified Honda CB750 unit with the speedo drive still working. The front rotors are from a Honda CBR1000, the front brake and fork legs are from a ‘08 Honda CBR600RR, while the triple trees are custom machined pieces,” says Josh. Not wanting to forget our four-wheeled brethren, he’s also added a 1960s car fog light.

With the final touches just moments away, Josh couldn’t bring himself to order the Tarozzi clip-ons, so he decided to build his own. The tank is from a CX500 deluxe, but it has been narrowed by and has had the filler location changed. His top shelf fabrication skills were also responsible for the seat transition and elegant rear cowl.

This was not the final vision for the CX500, what you see now has been tweaked and tweaked again like a Guns N’ Roses album. “Many parts are on their second or third version. I learned a lot building this bike and there was a good amount of trial and error involved along the way. The rear suspension is on its third version because I didn’t like the double shock idea and the first monoshock didn’t work out the way I had hoped. The front suspension is also on its third version. There are a lot of other parts that have seen changes during the build process, but it all came together perfectly when I rode down to LA for the 2015 Deus bike build off.” “That trip was an amazing experience and I kind of proved to myself that the bike was safe and pretty much finished. With that said, I don’t know that any project bike is ever truly finished though…” I guess it’s safe to say that not all bikes are done when the builder puts down the torch. We’re not sure about you, but for us this is inspiring as all hell. Why? Because it proves bikes truly are canvases that are never really finished. They are something that grow and change and get better over time, just like their builders and riders. And who could ask for more than that?