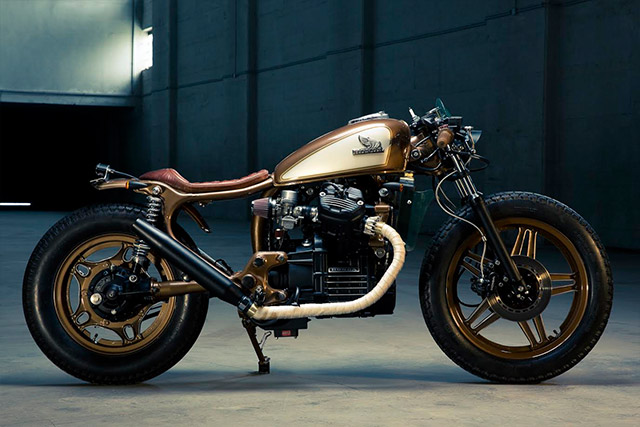 After 35 years the CX500 is continuing its second coming and receiving a lot of love from bike builders across the globe. This time, it’s from our German friends at Kingston Customs. Their last build was a stunning stripped down BMW R75/6; to say it was well received would be an understatement. As for the stock Honda CX500, the visually appealing V-twin engine was the saving grace of a bike that was commonly called the “plastic maggot”. Kingston have obviously lost all the plastic fantastic and in true German fashion, have created one of the cleanest and tastefully modified CX500 café racers we have ever seen. So when Dirk Oehlerking from Kingston finally got the donor CX500 back to his garage, the first thing he did was to strip her down completely. Dirk isn’t the kind of guy that takes the easy way out either. Every screw and every part on the bike passes through his hands. Each one is checked, machined, modified or newly made. “I am committed to using the original screws with their special patina” he says. The Cx500’s  transverse V-twin engine has been treated with thermo-sensitive coating and the exhaust manifold is wrapped with thermal tape. Dirk has also converted the fork suspensions with air. The tiny fairing has been handmade, along with the bench seat, battery box, fenders and foot brake lever. The Harley exhaust has been modified and the front fender was shortened and has now become the rear fender. The footrests were taken from an XT 600 Yamaha, the stub handlebars are from Fehling and the Stahlflex brake lines are from Spiegler. The headlight is from Bates covered nicely with a Harley cap. Rear Tires Avon 5.00-16, Front 4.00-19. The stock comstar wheels have been painted gold, along with the tank, frame and matching gold grips. The dash has been completely simplified with nothing but a speedo – except for a spark plug that protrudes out of the steering head. They say the devil is in the detail, if this is the case, then there’s a lot of devil in this build. Dirk has been pleasantly surprised with all the positive feedback from people who recognise the CX500 and can’t believe it’s the same ugly beast they rode when they were younger.