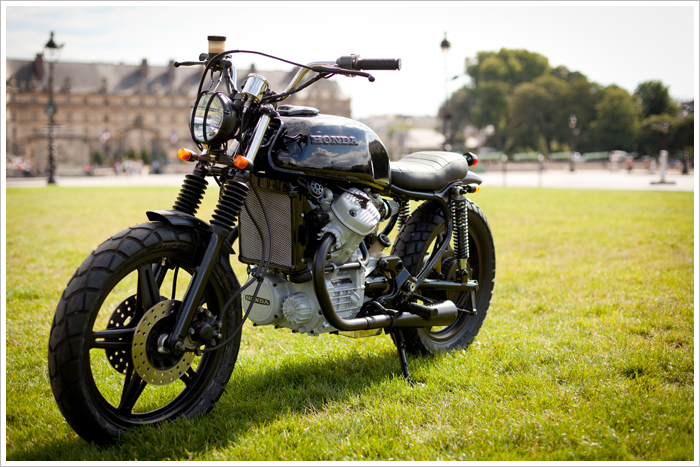 Without sounding like Captain Obvious, we see loads of bikes here at Pipeburn and there seems to be a couple of trends. The first being street trackers are becoming a vastly popular style of bike. We’re guessing many builders are moving away from the more common cafe racers and bobbers that have been so dominant in the scene for the past couple of years. The other trend is the humble and usually ugly CX500 or ‘Japanese Guzzi’ as we like to call it, has become a new favourite donor bike. And why not. They are more reliable than a Guzzi or BMW, not as common as the CB750, and they look great when done right. The guys at French shop Rive Gauche Kustoms (which translate to Left Bank Kustoms in English) love the CX and is why they’ve chosen it again for their latest project. Their stunning last bike spread around the internet faster than an Old Spice commercial. Working from their workshop in Paris it looks like they’ve been busy creating this bike they call the ‘Street Trail’… The concept behind the build was similar to their first build. “The idea was to make the bike lighter, more easy to ride in the city streets, but still with a dark military style and skateboarding touch” says Julien from RGK. If you’re wondering what the “skateboard touch” is, take a closer look at the tail light and headlight. The head light has been mounted on a skateboard truck while the tail light is sitting perfectly on an Independent skateboard truck base.

“The idea was to make the bike lighter, more easy to ride in the city streets,
but still with a dark military style and skateboarding touch” The original frame has been cut, welded and then epoxy painted. The wheels have been painted in black, also a nice pair of Dunlop trail tires have been added for that quintessential street tracker look. The stock Honda tank has been given the same black paint treatment. The seat has been hand made by the guys at RGK. “The most beautiful part of the bike (the motor) has been painted in shiny Grey to make it most visible as possible… the swingarm too” says Julien. Some other features include shorter muffler with black high temperature paint, drilled disc brake, Tomaseli Bars and if you’re looking for the battery, yes it’s been moved under the frame in a stainless steel box.

There’s only one way an old school skateboarder like myself can describe this sweet little street tracker with skateboard influences and that’s simply as… RAD. We look forward to seeing RGK’s next build – we have a feeling these young Parisians are only showing us a small glimspe of what’s to come.