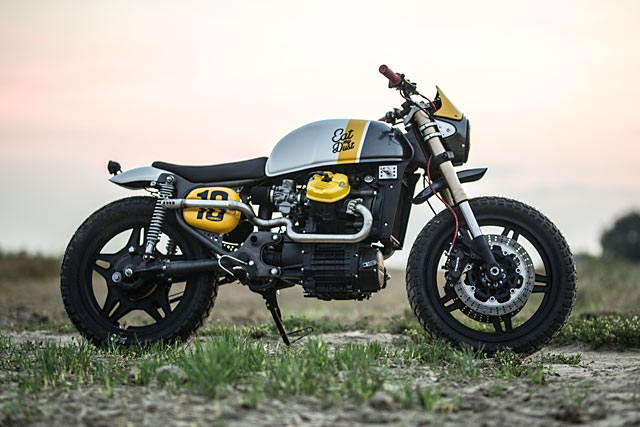 It’s easy to forget that the scrambler’s origins are steeped in racing. Sure, the modern-day interpretation seems to be more about enjoying nature than about silverware, but the ‘scramble’ the genre’s name refers to wasn’t a scramble across rough terrain, but a mad scramble to the finish line. Keeping that tradition in mind, Poland’s Cardsharper Customs has just unleashed this sporty Honda off-road racer on the unsuspecting local terrain. We’re pretty sure the Polish rocks, dirt and finishing lines won’t stand a chance. 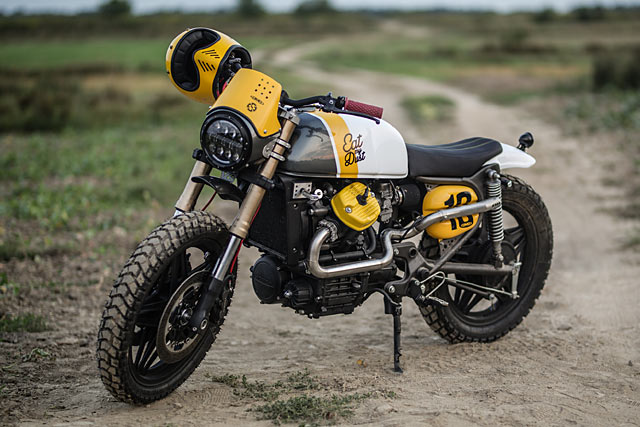 “The customer brought this Honda CX500 to me over a year ago,” says Cardsharper’s Jacek Mulak. “I did not have time to take care of her, but he agreed to wait. We then determined that it would be something like a cafe racer. In the meantime, several CX500-based cafe racers appeared on the Internet; they seemed to me to be a little over-engineered.” So when it was time for Jacek to start the build proper, he changed track and proposed a light scrambler to the owner. “The customer really wanted upside down forks, otherwise I had a free hand.”

With a fresh pack of angle grinding discs, Jacek got to work. The back of the frame was shortened and the new parts required to hold the fender were made from scratch. He also removed the centre stand and repositioned the rear brake lever so that it would be as discreet as possible. “Then while looking at the shape of the subframe, I came up with the idea of ​​using the bottom of the old tank as a side cover where the exhaust would run along the same channel as the bike’s frame. It seemed easier in my mind than in the execution, but finally I think I managed to make it look good. The exhaust itself is stainless, and its end part is removable with a silencer baffle inside.”

[superquote]“I came up with the idea of ​​using the bottom of the old tank as a side cover where the exhaust would run along the channel.”[/superquote] 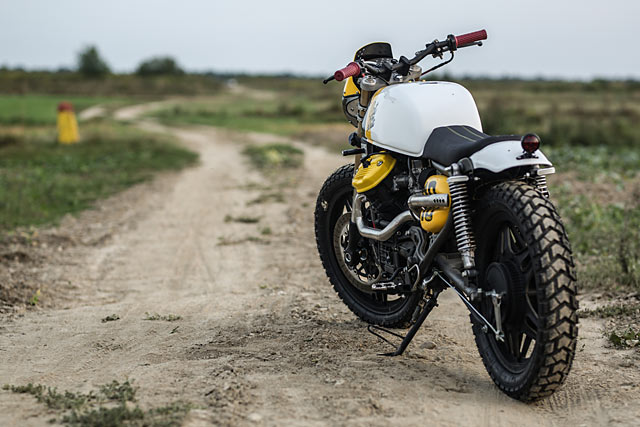 Another custom element that was key to Jacek was the wind deflector. “We chose the cool lenticular lamp with the customer, and I wanted her to have a proper setting. I also wanted a nice retro fairing on the bike. Fortunately, the motorcycle had an original fairing and instead of cutting the sheet, I started to draw what I would have to cut from the old one to get the desired shape.” Again, Jacek notes that it’s easier said than done; with his metalworking tools, it wasn’t simple working with plastics. But he didn’t give up, and he says it was worth it. 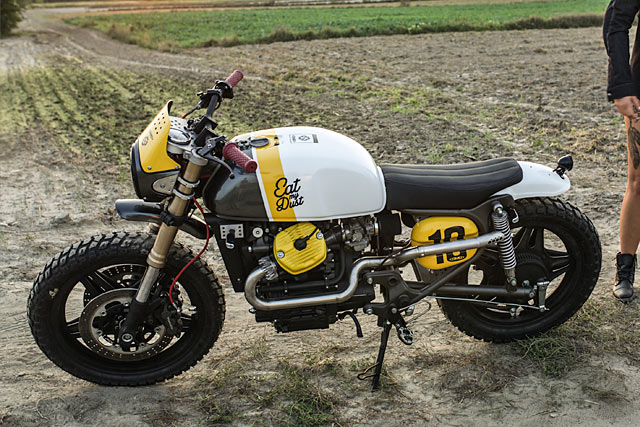 “Of course, that’s not all. There are a lot of small things on the bike designed and made by hand, too. There’s the lowered footrests, the dash with a speedo mount, the fenders, the seat, the hidden battery and the electrical box. An interesting fact is that I used a super durable material usually reserved for yacht upholstery on the seat. Of course, the entire motorcycle was refreshed as well: the engine was painted, I powder coated the frame, rims and accessories, and all the old bolts were galvanized or replaced.” 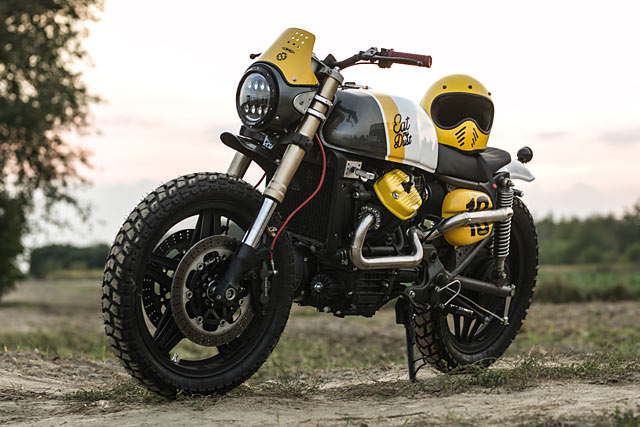 Around this time, the customer began to wonder what helmet would work well with the motorcycle. The paint scheme was basically ready, so they knew they wanted a yellow retro enduro helmet. The best looking – and more importantly the lightest – turned out to be a DMD ‘SeventyFive’.

“The client tried one on and fell in love straight away. Then I came up with the idea of inviting DMD to sponsor the build. We asked for a helmet in return for placing their logo on the motorcycle. They agreed immediately. A funnily enough it also improved the build, because the logos are a great complement to the colour scheme and overall theme of the bike.” 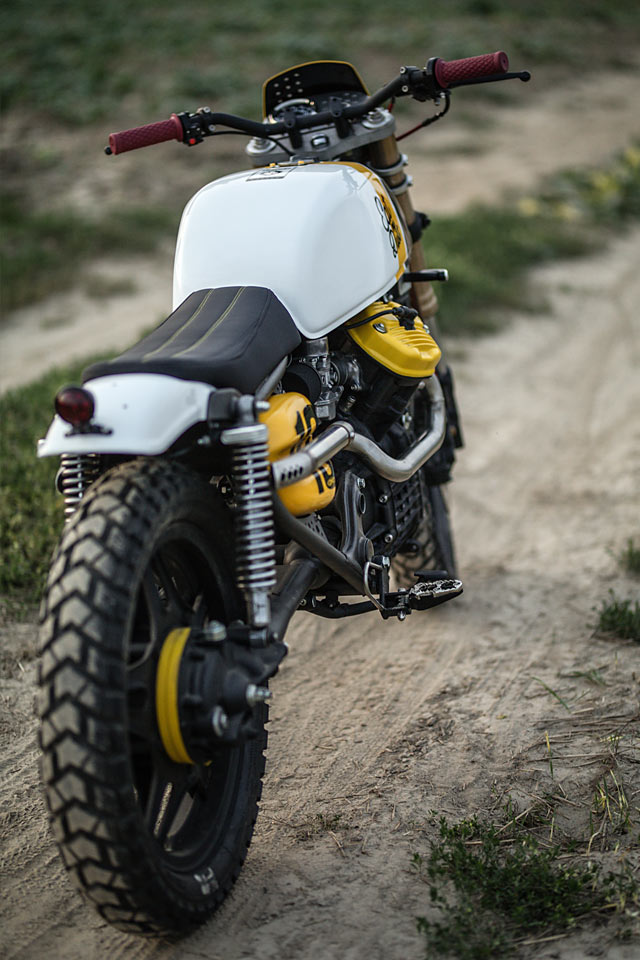 And by way of ending the story, Jacek updated us with a great little tidbit regarding the new owner being so happy with the build, he’s decided to give it to his son on his 18th birthday. Sure he’s only 10 now, but which dad in their right mind would want to share a bike like this until they had their fair share of fun? Smart guy. 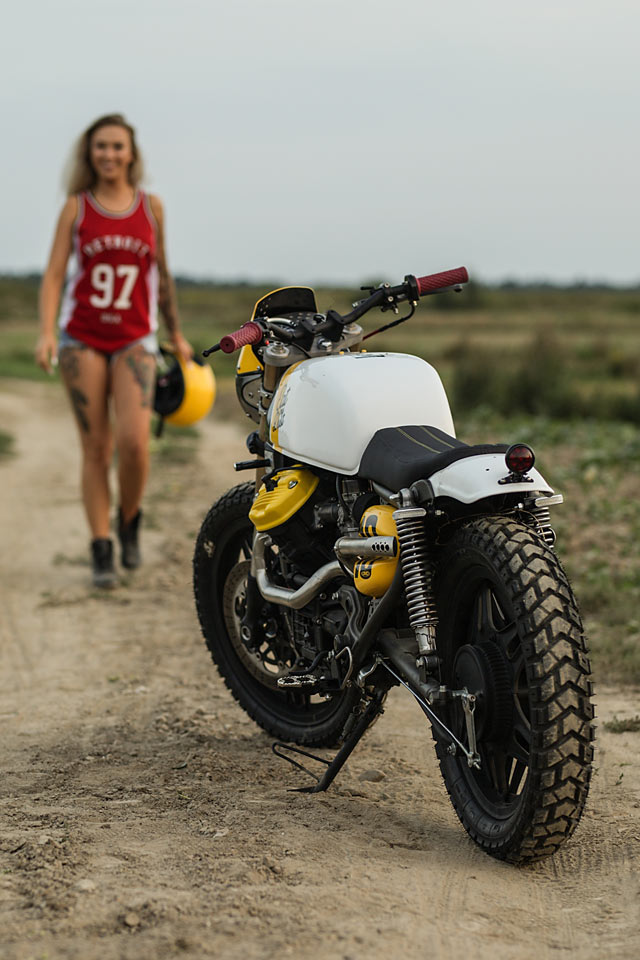