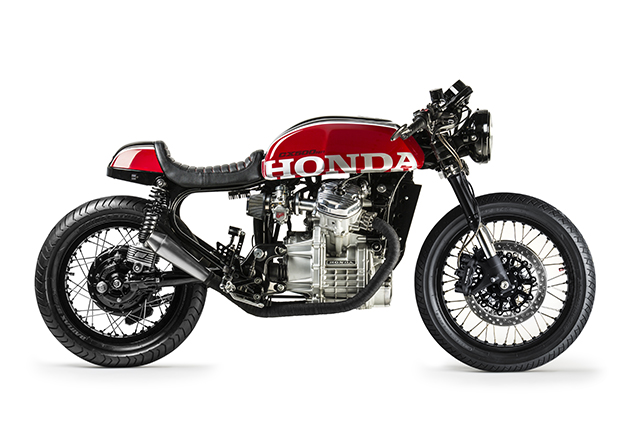 To create a motorcycle so good that passers-by ask you when the factory started selling them, you need a designer, fabricator and builder capable of bringing such a bike to life. With his CX500RR, Mike Meyers has proven he is all three and starting out with the much maligned 1980 Honda CX500 he only made the task harder. But with a love for the look of the CX’s engine design and ready to prove the doubters wrong he built a café racer that would easily take pride of place on a Honda showroom floor. As a builder myself, I always like to focus on the engine first after the design phase has been completed. Not only is there no point in building a beautiful bike that doesn’t run but it saves damaging any new paint and cosmetic modifications as you swing the spanners, leak oil and wrestle rusted on exhaust bolts. Following this rule Mike decided he’d begin with a full engine rebuild something that might not have at first appeared necessary with only 10,000miles on the clock, but the green slime oozing from the pulse generators cover was the first sign not all was well. Worn out parts, imperial bolts jammed into metric holes and a few other surprises during pull down confirmed it had been the right thing to do. With money generated from selling off some unwanted parts, Mike was also able to shell out for a set of new Mikuni’s from Murray’s Carbs and the motor was purring. The first major change to the original design of the CX500 comes in the way of a full CBR600RR front end. The inverted forks lower the overall stance of the machine while offering rebound and compression-damping adjustability and the modern twin disc braking combination are a huge improvement over stock. Mike was no fan of the original Comstar wheels but being a shaft drive finding suitable replacements isn’t as easy as it sounds. But with some helpful hints from his fellow CX500 internet forum friends a set of GL1000 wheels were sourced and with a little milling, spacing and shimming to match the splines the new look is first class. With modern controls from the CBR600RR attached to the front end it made sense to use them with the clip on bars for an aesthetically pleasing front end that functions like a new bike. To make it all work Mike had to splice the wiring of the switch blocks into the factory loom, a challenge he took on with great enthusiasm. With his hands on CBR600RR parts it made sense his feet rest on them too so a set of rearsets from the model were also sourced and adapted to fit. The bike now sports the moniker CX500RR requiring one extra step of fabrication smarts, grafting in a CBR600RR gas cap into the factory 80’s tank, brilliant! Mike had always intended the engine to be the show piece of the build, but the standard looks were never going to cut it, so the tank is now resplendent in flowing red, white and black paint with striking Honda graphics. A new tail section and seat give the bike a real café racer feel and hide much of the unsightly wiring. While wrapped pipes, cone mufflers and aftermarket filters clean the overall look and make the most of the negative space the CX’s frame offers. And then there are the details that make this bike special, encouraged by his friend Tyler to try his hand at fabrication, Mike made himself a rear caliper bracket from scratch. Designing the piece, making a template from cardboard, milling it on a CNC machine and painting it black it’s Mike’s favourite piece. You may never notice it, but what you will notice is the incredibly detailed tacho face that truly highlights Mike Graphic design skills. Once again, doubters of the CX500’s quirky characteristic and stylings have been swept aside by a creative vision well thought out, designed and executed by a man committed to proving his detractors wrong.

Mike would like to give his friend Tyler Schwarzkopf of Bleed Machine Industries a big shout out. Without his help and fabrication skills, this bike wouldn’t have turned out like it did.