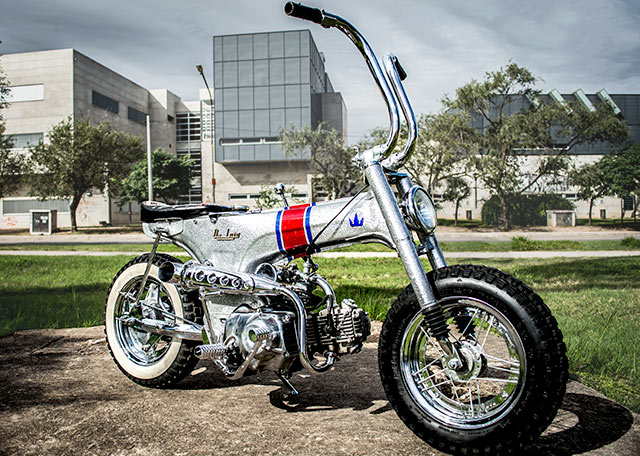 If there’s one thing that Argentina’s Lucky Customs should be known for, it’s their brain frying, jaw dropping, eye watering diversity. From space-inspired racers to off-road beasts to 1950s salt racers, these guys seem to be going out of their way not to build the same bike twice. Here’s their latest zag when we were expecting a zig; a Honda Dax they call ‘Luxury’. “This bike is a bobber made from a classic 80’s Honda Dax,” says Lucky’s Lucas Layum. “I wanted to make it like a little gem or a piece of jewellery; I named it ‘luxury’ from a metal emblem that I had previously found at an old car swap meet”. Lucas started by reworking the chassis with the intention of leaving it as clean as possible. All clutter was removed, but Lucas didn’t leave things there. “The front suspension is inverted as standard, but we made the rear rigid with some decorative metal rods”. Is there such a thing as a lowrider motorcycle? There is now. The ‘Ape Hanger’ handlebars were chosen and manufactured in a very traditional way, and clearly they bring the bike to life. As does the front spoked wheel. “Note that these tires have to be removable, so we made a ‘design beam’ crossing one side of the rim so it can be easily disassembled if needed”. The bike’s paint is wall-to-wall silver metal flake and the exhaust is like a cartoon caricature of the original. Which is probably no coincidence, as the seat has been upholstered with a Roy Lichtenstein-esque comic book panel. “The gear change is like the suicide clutch of larger Harley bobbers,” says Lucas, with his tongue firmly planted in his cheek. “I wanted this build to prove that it really does not matter what a bike’s displacement is, it can still be as cool as you want. It is also a personal tribute to a motorcycle that marked my adolescence and on which I carried my first girlfriend and got my first kiss”. Lucas went out of his way to stress that the metallic flake is completely wild in person. “Its fully awesomeness isn’t really captured in the photos, but see it in person and I guarantee you’ll be blown away”. What a gem.