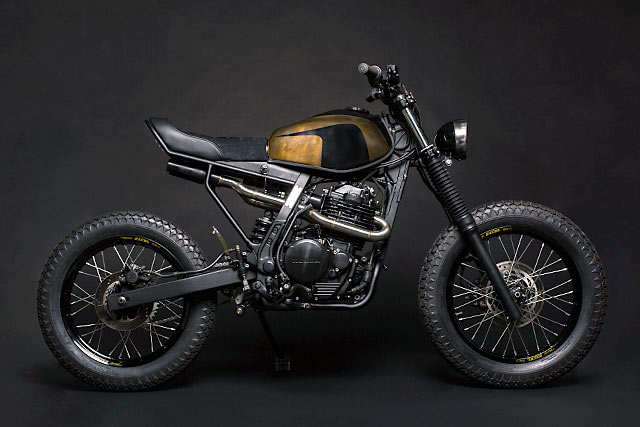 There’s something refreshing about Atelier Medusa. Based in France, the shop doesn’t make any pretensions about being the most experienced team out there. They have mentors, they ask questions and they learn. A lot. Each of their builds has been getting better and better. And they continue this upwards trajectory with their latest creation, a perfectly-proportioned 1988 Honda Dominator scrambler. Medusa are only new the custom scene, with the Dom’ being their third tilt at building a motorcycle. The shop is made up of two bright-eyed engineering students, Quentin and Thomas, who have spent a lifetime sketching and building things. They draw their inspiration from science fiction films – including post-apocalyptic staples like Mad Max. And that’ll give you an idea of the direction the pair wanted to take the Dominator in. They wanted something good-looking and to test their skills, but they also wanted to ride it. “Because we are tall people we wanted something high and comfortable,” they say. “But it had to be very thin and ‘sober’ at the same time and have nothing to hide. We wanted to stay minimalist and pure, without any plastic. That is, to say, the opposite of the Dominator was when it left Honda’s factory in 1988”. The Honda Dominator, an early adventure-touring bike, was outfitted with more plastic than a Brazilian model when it initially hit showroom floors. Over time it’s garnered a legion of fans who praised its reliability, comfort and off-road manners. But now it’s an in-demand bike for custom builders. As the guys from Atelier Medusa found out when they picked it up. “The previous owner had tried to change some parts of the bike,” they recall, “without any real success. So we had to take care of it”. You may have seen a build previously completed by the pair from Medusa. It was one of the craziest Yamaha TW’s we’ve seen. But it was, by their own admission, an unpractical little beast. “We were looking for something more powerful, functional and with more aggressive riding behaviour”. So the team started by replacing the original 21” front and 17” rear with 19” Excel rims running Firestone ANS military tires. The shocks were modified and the seat raised, instantly giving the Dominator a more aggressive, street-capable stance.

[superquote]“We were looking for something more powerful, functional and with more aggressive riding behaviour.”[/superquote] The scrambler’s tidy 2-2 exhaust system, which fits neatly under the subframe of the bike, was designed and made by Medusa from stainless steel. The mufflers, which are nearly non-existent, come via US powerhouse Biltwell. The engine itself, having done a problem-free 50,000kms was pulled apart and given a freshen up, ensuring it’ll rattle teeth and shake eyeballs for another 50,000kms. Underneath the tank the team completely rewired the old Honda and installed a Motogadget M-Unit and Motoscope Mini. Rounding out the electrical package is a headlight from Harley Davidson and some integrated brake and indicator lights set below the seat. “There was a lot of thinking and welding with this build to respect the lines,” Medusa recall, “To make everything work together and fit perfectly in place without any extra space”. That careful eye for design continues when with the tank. The finish isn’t paint or powdercoat. “We were looking for a unique colour when Guillaume, our mentor in metal shaping, showed us a new treatment process,” the team say. “It uses a rare acid that reacts with steel and gives it incredible hues. We managed to get this brown which has purple shades to it. About fifteen hours of work and two tanks were necessary to get this colour. We used the same process on the headlight ring with a lighter hue”. The whole process of building the Dominator scrambler proved to be a lot of fun. But not half as much of a giggle as riding it proved to be. “It’s so damn light, easy to ride and perfect for tall people like us,” they say. “But what we like best about it is that, in the end, we think it ended up looking more sexy than aggressive. Or maybe both. It’s weird. But we love it!” And we do too.