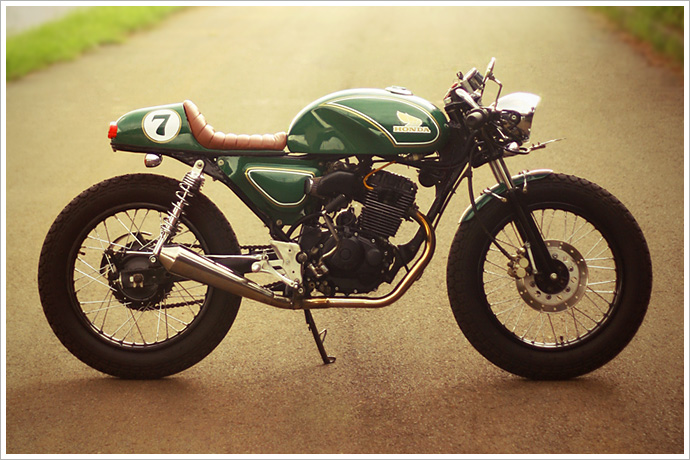 Sometimes we receive bikes that have something more captivating than stunning looks. Something more powerful than the number of horses they output. Something more impressive than the number of hours that have been spent building the bike. They have a great story. A story that is more fundamental to the build than any other part on the bike. This is one of them, and this story starts like many others on this site, person buys rusty old donor bike for next to nothing and decides to resurrect it into a beautiful little café racer. This is where the story differs from others. This time the owner’s Dad had seen the start of the project and had heard of the plans his son had for the bike, but unfortunately due to cancer, he didn’t know whether he will be alive when the bike was finished. But here’s the kicker, the day before his father dies he says to his son, “your bike will be amazing, and I’ll see it from the sky”. So this is the story of a bike built in memory of a father who unfortunately didn’t get to see his sons dream of owning a custom motorcycle… The name of the owner is Arya Pratama and the name of the bike is ‘Dolores’. Arya named the bike ‘Dolores’ because it means pain or sorrows in Latin, and under the circumstances it has been a very painful time for him. First of all, Arya enlisted the skills of his good friend Rio from Ttwenixmotorcycle in Jakarta, Indonesia. Rio has a great reputation as a custom builder in his local area. “Arya asked me to build a classic café racer and said it should look like a greyhound dog,” Rio says. “The bike is 1994 Honda GL 200, here we call it a Honda Tiger. When I saw the bike for the first time I thought, damn this bike is so ugly! It had a wrecked rear frame, oil leaking everywhere and many other missing or broken parts.” Arya paid $400 for the bike, which still seems like a lot of money, even by Indonesian standards. “I started customising the rear frame to make it straight,” says Rio. “Then, I changed the front fork from broken upside-down forks to the original front fork. I then placed 18 inch rims for the front and rear wheels, with 4.00 tires. Next was clubman bars to give it the classic look. The head light, tail light and the turn signal are all after market parts.” The gas tank, seat, side cover, front fender and exhaust of the bike have been hand made from sheet metal by Rio. “All fully made by hand, using hammer and iron” he says. “Because it’s not easy to find special tools for customs here, like an English wheel etc.” The engine has been sandblasted to give it a raw texture and then finished with black paint and polished fin edges. The Number 7 on the seat hump was one of the finishing touches – choosing the number 7 because it has always brought him lots of luck. This little café racer gave us a smile just looking at it, so we’re sure Arya hasn’t stopped grinning riding it around the streets of Jakata. We’re also sure Arya’s dad has got an even greater smile looking down from the sky admiring his son’s dream bike. We’ll leave you with a quote from Arya that we hope will put a lump in your throats. “I’m so satisfied with this build, finally my dream has come true, my dad would be very proud.”