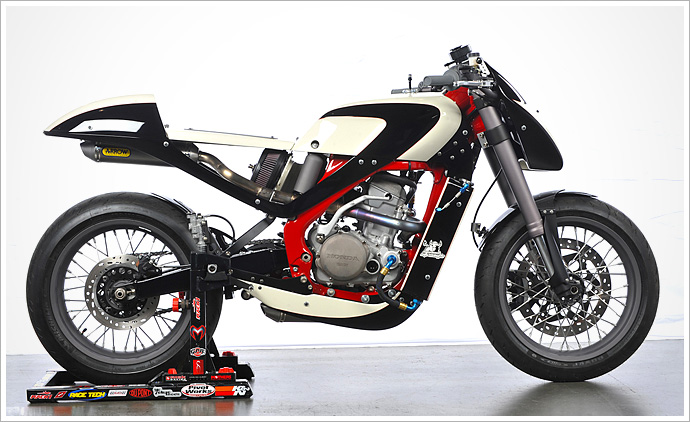 Inspiration. It can come from so many sources, and affect different people in different ways. Some people take no notice of inspiration. Some people use just their surroundings for inspiration. And some people actively seek out inspiration, grabbing it by the collar and headbutting it into submission. Darrell Schneider from DS Restorations (DSR) is one of the latter. After more than 25 years in automobile restoration, Darrell decided he needed a change, and a challenge. A long history with motorbike riding, with no further thought than fueling them up and riding them, gave Darrell a basic idea of where he could start. The challenge brought up the bike we feature here today, the DSR GP 250R Café Racer. Built mainly around CRF250R components, with inspiration drawn from numerous bike builders, it’s proof that sometimes it’s worth it to challenge yourself, you never know what might happen… Darrell hit Google hard in the design process of the GP 250R, searching through ‘thousands of project bikes’ before coming to any decisions about build style. Drawing inspiration from bike builders such as Ron Woods, Roland Sands, Richard Pollack & Marcus Motos,  Darrell decided that he knew what he wanted to build. In his own words: ‘the bike had to be a new twist on an old style, nothing show bike fancy, something you want to ride. I wanted the old-timers as well as a 20 year old to think this bike is cool’. Now research was done, Darrell was a man with a plan. Starting with a CRF250R donor bike, the engine was taken out and fitted to a custom aluminium subframe. Manufactured into the frame is the bracketry for the fuel cell, fuel tank cover, seat, rear fender, air cleaner, and rearset uppermounts. All normal bike stuff, I am aware, but the custom subframe allowed Darrell to not be restricted to CRF250 parts in the build. While playing around with aluminium, the radiator shrouds, lower body panels, fenders and fork covers were also manufactured, with mucho lightness making the bike light in weight, to fulfil it’s sporting credentials. Bodywork is all custom, with the front fairing, fuel tank cover, seat, rear fender, body side panels and air intake all being produced in house to suit the bike. Each individual panel was made of wood, foam & body filler, refinished, molds made and the current panels being cast from the molds. A lot of effort, but handy should any of the parts need to be reproduced at any point. Using inspiration from his childhood (and from Jack Phinn’s 450 flat tracker), Darrell modelled the fuel tank cover on the Honda Elsinore tank, a bike much sought after when he was a kid.

The CRF250R suspension has been fitted, albeit tweaked by RaceTech Suspension, using their super single setup, triple clamps and fork lugs, a Durelle Racing shock height adjuster has been fitted to the rear. A Honda CBR600 has donated it’s calipers to the build, mounted on custom mounts, working on Brake Tech iron rotors. The hubs are Talon supplied, the Sun rims wrapped in 17 inch Michelins. Taking care of the exhaust side of things is an Arrow Special Parts titanium dual system, modifiedby Darrell to just have a single outlet. This is due to Darrell’s belief of how ‘fat’ bikes look with two mufflers at the rear. Cooling duties are given to a custom radiator, using AN fittings and hose, to add to the racing image the bike gives off.

Visually, the bike looks like a healthy mix of bike styles. Spoked rims, the Elsinore style tank cover give the bike an old school look, mixed with Moto2 styling, and a hint of Ducati OEM aesthetics rounding it out. To take the initiative to challenge himself, to research his butt off, to have the ability to do the majority of work himself, has allowed Darrell to produce this rolling work of art. Using dirtbike components, with his skills learnt over his time working with cars, the dSR 250R GP is a new age café racer, hand built to please anyone’s eyes. It’s amazing what inspiration can do.