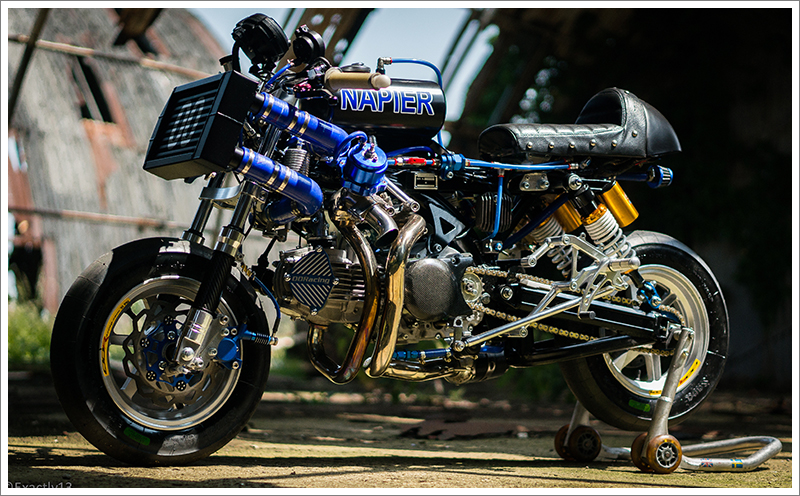 OORacing started on the chassis first which needed to be slightly reworked to accommo­date the top mounted turbo. “This was a fairly simple affair that then enabled us to start working on exhaust and induction pipe layouts, which proved to be one of the biggest challenges in the entire project” says Adrian.

When you are working with a Monkey there are some real issues, usually in the form of space – there isn’t any. “This is all part of the fun you get when working on such a small bike. A large amount of space was already being consumed by wiring for the ECU, fuel pump, lambda sensor, coil, reg/rec etc. So it left us with little room for piping.” So the guys built a subframe to house the ECU, battery and fuel pump. “Originally the intercooler was side mounted but after some initial runs we quickly real­ised that the amount of heat getting produced by the turbo was not getting cooled fast enough. This led us to mockup a custom intercooler out of a cornflakes packet so we could arrange the pipework and then get a hand built one made by Docking Engineering who did a great job. The intercooler is now mounted on the front of the bike so gets the full force of the air when in motion.

The next issue came from the oil control to the turbo. After much experimentation and late nights we ended up fitting a needle control valve to control the oil feed into the turbo and a small electronic scavenger pump to remove oil from the turbo.” After a while the guys finally had the bike ready to run in dry build state. “It came as no sur­prise that it did not run first time” says Adrian. “The main challenge was getting the ECU talking to the other components in the system. Days were spent in front of a computer entering data into an excel spreadsheet in the hope that it would all come good. Without our rolling road it would have been a lost cause, but once we got the bike bump started we were able to read the data from the bike and start figuring out what data needed changing. This meant fine tuning fuelling calibration, ignition advance curves and retard under boost.” “Days turned into weeks and with one trial after another with different values we finally had a bike that was ready to run under load and actually see if it would produce boost. We soon discovered the bike actually had too much boost at nearly 15 PSI. Now whilst that sounds exciting, it was way too much for such a small cc engine. Running it with this amount of boost would mean destroying the engine in a very short time frame which was not part of the plan. The best way to control the over boost was to fit an adjustable external waste gate and this allowed us to get the boost running at around 8 PSI which means we have an engine running happily and no detonation in the engine.” This project has a spec sheet longer than the actual bike – probably twice as long. The front forks are custom made OORacing CNC 27mm hydraulic kit with over size 200mm floating disc. The wheels are also custom CNC 10” x 3.50” wide with Sava slick tyres. The full exhaust system was made by Lee Mitchell at Steelheart Engineering and the silencer is hand made based on OORacing Carbon TTR1 system. They also made the rear sets with custom made mounting brackets and the Vincent style handle bars. This turbo charged Monkey is currently already achieving close to 100mph in test runs and is producing around 25BHP, however OORacing are confident they can get that figure to at least 33BHP – not bad for a bike that only weighs 75kg. The project has taken them a few years to complete, but the guys at OORacing have learnt alot during the process – which will be invaluable to their Monkey loving clientele. The question now is: what will they do next to the humble Honda Monkey?