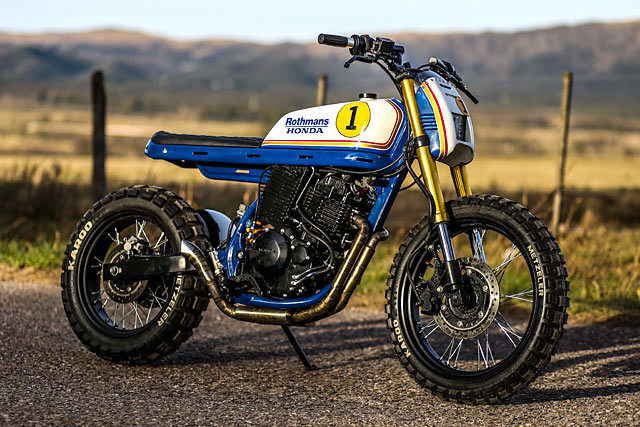 I can pick a Lucky Customs motorcycle a mile away. They’re one of the most distinctive custom builders in the world. Over the last few years the Argentinian shop has produced some of the craziest, most genre-bending trackers, choppers, bobbers and cafe racers. And this time around they’ve continued their streak of excellence with their latest creation, a Honda NX400 scrambler. If you’re reading this and wondering what exactly a NX400 is, don’t fret. It’s an honest, light little workhorse that’s popular in South America. A go-anywhere, do-anything machine that’s low maintenance and ultra reliable. It is a lot of things. But it’s most definitely not cool. So it was inevitable that Lucky Customs would opt for their usual brand of extensive South American cosmetic surgery. The engine was removed, the electrics stripped out and then everything else was thrown away. That’s right. The only part of the standard bike you see here is the powerplant and the electrical system. [superquote]“On top of the frame sits an old fuel tank from an 80’s model Kawasaki GTO. Somehow, it works perfectly.”[/superquote]

The top part of the scratch-built frame was completed with a line that runs completely horizontal to the ground. At the rear the uninterrupted line that surrounds the bike has a neatly integrated rear tail light. On top of the frame sits an old fuel tank from an 80’s model Kawasaki GTO. Somehow, it works perfectly with this NX. Well, not ‘somehow’. They had to cut and relocate the fuel tap and tidy up the welding seams along the bottom of the tank. They don’t do things the easy way. And it’s the same with the headlight surround, which is made from a very, very heavily modified fender. The front fork assembly is taken from a Honda CB190 Repsol model – another motorcycle that’s quite popular in South America but virtually unheard of anywhere else. Not one for traditional spoke patterns, Lucky Customs opted for a distinctive 4 spokes in 9 clusters. Tires are Metzeler Karoo’s, a hybrid road/enduro tire popular in the Charlie Boorman cosplaying scene. Now here’s one of the best things about the Honda. Rather than putting the battery in an underseat tray or hiding it under a seat hump or down near the swingarm the guys from Lucky Custom made a box that sits on the right hand side of the engine. Finished with fins, it hides cleanly in plain sight, looking like part of the engine. I haven’t seen that done before. There’s a whole host of tidy details that I could carry on about. The shop built Z bars. The one-off stainless steel exhaust system. The gorgeous colour scheme taken from Rothmans, purveyors of fine motor racing vehicles and lung cancer. It’s near-perfect. Once again Lucky Customs have proven themselves one of the most interesting and innovative builders on the scene today. While clearly a scrambler, this little Honda NX400 is one of the most distinctive scrams we’ve had on Pipeburn in a long time. It’s littered with wonderfully thought out details but above all, it’s the workmanship and design that shines through. And we’re not the only ones – in a national Argentinian custom motorcycle show it picked up first place. Deservedly.