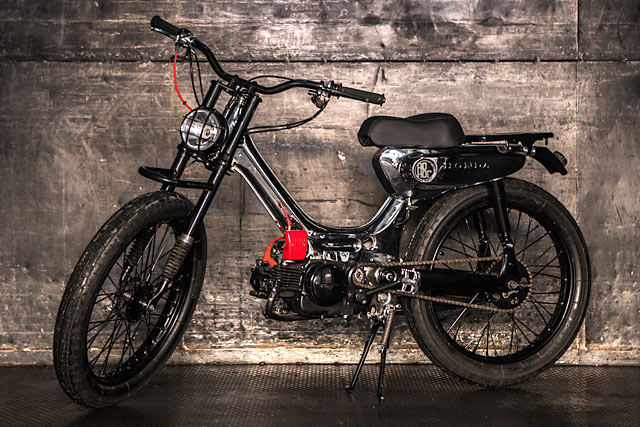 It’s a wondrous thing how less can sometimes be more – especially when it comes to mechanical engineering. Soichiro Honda understood this implicitly; his natural abilities saw him dubbed the ‘Japanese Henry Ford’. Nowhere is this more accurately demonstrated than with his pressed metal frame motorcycles. These amazingly simple yet useable designs would spearhead Honda’s American operations and open many minds to the joys of two-wheeled transportation. His ‘Little Honda’ PC50 mopeds of the mid-to-late 60s represent some of the most popular bikes the company ever made. Enter Spain’s Ad Hoc Cafe Racers with an itch to be scratched and a few crazy custom ideas that just might get Honda San’s tick of approval were he still around to see it.

Shop owner David Gonzalez kicked out chat off by revealing the origins of the donor bike. “I bought this bike from a neighbor who had offered it to me several times, it was in very good condition as he had already begun to restore it, but its original orange color and the thin wheels were definitely not to my liking.” At first, David thought about painting it in pink, since it was supposed to be a gift for his wife. But after a conversation with a good friend (and presumably sobering up a little), he remembered the amazing work of Chicara Nagata and decided that it would look awesome chromed. Who said changing your mind was a bad thing? “Starting with the moped’s wheels, I added 18″ rims with some Heidenau K44 tires. Then the front forks were modified and we also welded a luggage rack to it.” Note the obvious similarity to his previous Yamaha MT-03 build. “The Honda’s headlight comes from an excavator and the handlebars are wider than the originals; also here we have the starter, clutch and gear shift levers and the front brake.” Deciding to add some turn signals for a little peace of mind, Dave installed them on the tips of the handlebars to keep things clean. He also installed a rack in the back and had the seat upholstered in a non-slip ‘technical’ fabric.

[superquote]“Chicara Nagata and his ‘rolling sculptures’ are a real inspiration of mine, so in a way I guess the build is also an homage.”[/superquote]

“The inspiration at the beginning was more of a practical goal; I wanted a motorcycle to do daily errands on and to look for spare parts with. But after that ‘chrome’ conversation, the project turned into a little more than was intended and gained a life of its own. Chicara Nagata and his ‘rolling sculptures’ are a real inspiration of mine, so in a way I guess the build is also an homage.” As you’d expect, the chroming process was David’s biggest challenge. The polishing required to prep the pressed metal frame for plating was reportedly ludicrously time-consuming. But as you can probably tell, the efforts really paid off with the end result. “Funnily enough, the best part of the build is the functional part; it’s a really fun moped ride, it sounds really good and the reactions from passers-by when parking it on the street are priceless.” We’re guessing it’s them looking at their own reflections in the Honda’s chrome.