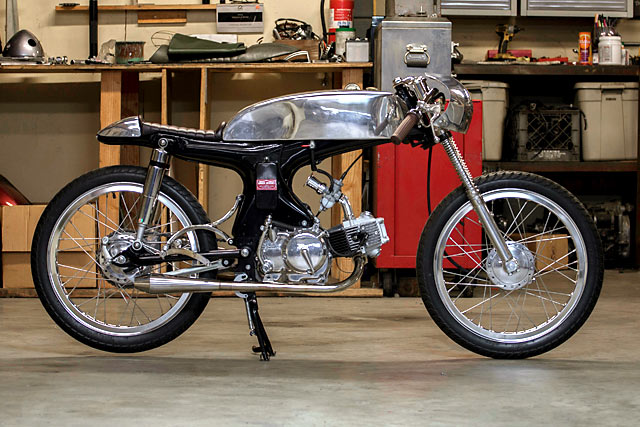 LA’s Kott Motorcycles are the clinicians of the bike-building word. They produce hospital-grade builds so clean you could eat off them. Each one of their cafe-inspired builds is a masterclass of balance, proportion and build quality. And while they specialize in big old Honda CB’s this time around they’ve tackled a smaller offering – a 1969 Honda S90 racer. And it’s one with quite a story behind it. The founder of Kott Motorcycles, Dustin Kott, has a long history with this bike. “I found it in the backyard of my grandparent’s house as a teenager,” he recalls. “It had spent most of its life on the front of the family motorhome travelling across the US as a campground grocery-getter. I pleaded with my dad to collectively restore the bike as best we could. Thankfully he agreed and we were able to get it running just before granddad passed away”. Dustin scooted around on the faithful old Honda for a few years. He was forced to – his father wouldn’t allow him to get a bigger bike while he lived under his roof. But one day Dustin cracked and bought a CB750. “My dad walked into the house and remarked at how beautiful the 750 was, before asking who it belonged to,” Dustin says. “My response was something like ‘Well gee Dad it’s mine’”. Then Dustin was invited to leave the family home. For the next 23 years the S90 went with him from house to house and garage to garage. But in recent times the ol’ faithful was starting to look a bit worse for wear. “Many years of wear and tear and neglect started to rear their ugly head on a bike that changed my life for the better,” Dustin explains. So he decided to spend a bit of quality time on the S90, and add a few feathers to his bow while he was at it. “I’ve always needed to develop my metal shaping skills to improve and innovate my own skill set,” Dustin says. “I needed a machine to practice on, one that was important enough to not give up on and one that needed some new life. I needed something pivotal.” So what better bike to learn on than the one that started it all? But with any build that acts as a testing ground for a new skill set, the process proved challenging. “It involved a lot of questions, some dead ends and a lot of grit. Metal shaping can be a tough competitor. With the purchase of a power hammer and some additional access to professional tools I managed to succeed.” ‘Succeed’ is putting it lightly, with Kott’s little Honda S90 being one of the best looking bantamweights we’ve featured in a while.

[superquote]“It involved a lot of questions, some dead ends and a lot of grit.”[/superquote] But it wasn’t easy. “The hardest part of the racer build was without doubt the welding of the aluminum,” Dustin says. “Anyone who has TIG welded aluminum before can attest to the fact that multiple things can go very wrong for you at any time, and often several factors implode on you all at once. My patience, which already runs thin, was tested time and time again.” But with a new armory of tools Dustin handmade the Honda’s seat cowl and pan, the fuel tank, front fairing, clip on handlebars and rear set controls – and all done absolutely perfectly. As you’d expect from a shop with a track record like Kott. Everything is proportional and immaculately finished. And there’s a nice original touch left in there too – the battery sidecover is left exactly as-is and features an original ‘Award Motors’ sticker on the side. The shop that Dustin’s Grandfather bought the motorcycle from. That the little S90 is Dustin’s first real shot at crafting aluminum is both awe-inspiring and a little unsettling. And it speaks volumes to his dedication and eye for detail – he’s done an incredible job on the happy little runabout. Now the racing Honda, punched out to 110cc’s and running Excel rims, is all set to live out the next 23 years of its life in the Kott family.