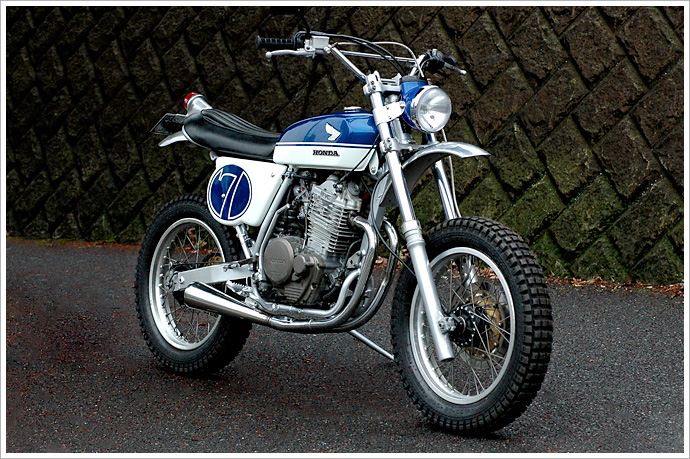 Looking back, I was pretty lucky I reckon. I got to grow up around vintage motocross bikes, learning to ride on 70s era Yamaha bikes. Although only smaller capacity bikes, I loved the feeling of riding something that had been ridden offroad for over 20 years, and could still go hard. I didn’t think there was any way you could improve on that. Until I layed my eyes on Speedtractor’s SL90. Or should that be SL600? A big bore late model engine matched with 70s styling, it’s very much the ideal mix in relation to the power to styling ratio. And it’s oh so pretty. Starting off with an idea put forward by a customer, to relive his childhood by having an SL90 to cruise around on, the crew at bike builders were interested. However, due to the customer having grown some since his childhood, a bigger power plant might be in order. In the words of Matt from Speedtractor: “We worked up a few concepts based around larger capacity 250’s and 400’s infused with the old SL’s easy going style and the client really got into our idea for a sort of gargantuan fun bike. Now with each party egging each other on, we decided to take it to the next level, knowing of an ex-enduro racer parting with his XR600”. And so it all started coming together. Speedtractor is a fan of factory feel parts, but with their own special flavour. Using a mix of NOS and vintage parts, the amount of thought put into the componentry of the build shows in the finished product. The tank used in the build took some time to locate, but it was worth it so “the proportions and the radii matched the very geometric casting of the XR’s lump, plus the fact it was centre seamed and came from a Honda was icing on the cake”.

To keep with the SL styling, the frame was coated in silver urethane, then looped to suit the seat profile. Integrated into the seat are the rear indicators, the vibrations have a tendency to crack indicator mounts on the guards. Tire size at the front was dropped to 18 inch, to match the rear, trials tires continue the homage to the owner’s childhood SL90. To ensure of power to match it’s aesthetics, the intake & exhaust system has been given a touchup. The factory air box was kept because it “comes in handy in sandy & muddy conditions” but fitted up with a free flowing air filter. This all helps the FCR carb to breathe, giving the bike ‘an insatiable appetite for rear tires”.

When purchased, the XR had a decent race pipe setup, but “the routing and position were way too perfect and space efficient’ for the required look. A set of new headers were fashioned up, ensuring no power was lost, rounding out in a slimline megaphone, with an adjustable baffle system. According to Speedtractor this makes for a “compact sexy version of a Supertrapp, with a delightfully gravelly snarl to it”. The time and energy put into the breathing parts of the bike paid off, with the test pilot almost thrown off the back on the first shakedown run. When purchasing the bike, the previous owner had mentioned something about the engine being tinkered with, and this could have something to do with the “faster than expected” test run as well. After a dyno run, the estimate at the capacity of the engine leant more towards 700cc than what the bike left the factory with. All in all, Speedtractor have taken their customers dream of having a grown up SL Honda and made it come true. High bars, 70s style brake lights, allow for nostalgia from childhood. On the other hand, the bored out engine and gravelly toned exhaust give you the pleasure being an adult and being able to afford a bike that throws back to your childhood, and is by all means awesome. And just so pretty.