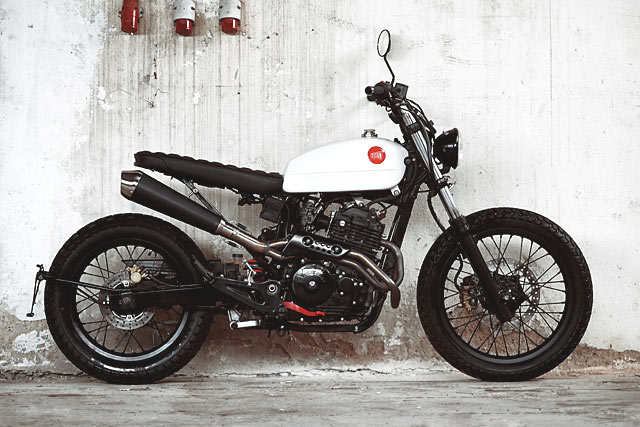 It’s interesting to think that before Henry Ford left his mark on automotive manufacturing, most commercial vehicles were still made by hand. In other words, everyone owned a custom. Nowadays, factory vehicles are pretty much exact replicas of each other and customs are the exception to the rule. But what if you met in the middle? What if a custom shop started to build more than one bike at once? It’s a question that Austrian shop Titan Motorcycles has not only considered, but tried. And here’s the result; a Honda duo of dust-loving daredevils they call the ‘Tracker Duet’. Since we last spoke, Titan’s Tom and Mike had to ditch their beloved “first official” workshop in the east of Graz and move themselves, all their two-wheeled kids and a bunch of other metal things to a new location toward the City centre. “It’s an old factory hall; a kind of lost space,” say the boys. “It had a lot of potential, but we had to put a lot of ideas, work, time, sweat and hard cash into it to pep it up and get it looking like a proper custom motorcycle garage.” But they got there in the end, and tell us proudly that they even have a bar with cold drinks now. And the first bikes to emerge from the shop’s less thirsty minds? It’s the Honda SLR650 tracker twins you see right here. While we’re told that one started life as an SLR650 and another as a ‘Vigor’, they are apparently exactly the same bike, bar a few nasty plastic bits. Intended to ride the wave of Honda’s Dominator success, the single cylinder bikes turned out to be more of a lacklustre commuter than lumber-dodging lunatics. “The SLR was bought by us after delivering another bike to a customer in Tyrol,” says Mike. “And the Vigor was owned by a young guy about 40 km outside of Graz. He approached us looking for a motorcycle that was more ‘street-like’; we were fairly certain we could make both bikes look much better in the near future. They were running quite well, so we were able to do a simple test ride before the dismantling and customising began.” But the real key to Titan pulling off a project like this was the serendipity of managing to find two customers who were after the same kind of bikes at the same time. “The brief was clear. The customers were not looking for adventure bikes, or bikes to travel long distances on. They both were after a nice-looking, light and agile bike with sufficient power for daily use in the city and maybe some short country runs on the weekend. Both wanted to have an optional second seat and both of them came to us because they had seen our previous yellow Honda Dominator build.”

[superquote]“But key…was the serendipity of managing to find two customers who were after the same kind of bikes at the same time.”[/superquote] And while we’ve been bandying about the word ‘twins’, the boys were adamant that they didn’t want the trackers to be identical. “They were build side-by-side, but we wanted them to be more like brothers than twins.” With that said, the mechanics of the two is almost 99% identical which made many things easier; but the SLR was fitted with a Kreidler tank and the Vigor got a tank from a Fantic Caballero. Both tanks hold just under 10 litres.

Of course, the tanks didn’t just bolt straight on. Both tanks had to be completely reworked as the Honda’s oil-carrying upper frame took up too much space. “The secondary air injectors were removed and a Jetkits replacement was installed. Also, a perfect air filter setup was found via DNA. The rear frame has been shortened and for the seat attachment, new struts have been welded in place.” Tom says that the new bench was made of stainless steel, rubber-mounted and covered with leather. The stitching was adjusted as an accent in the same colour as the tank and boy, doesn’t it look good? “Tuning the carburettors was the most time-consuming task,” says mike. “Our experience shows that it’s difficult for the single-cylinder models to compensate for the removal of the factory airbox and the smaller air filters. The single exhaust makes a lot of difference too; the back pressure in the exhaust system is dramatically reduced. But the solution we managed to work out added approximately 30% more power compared to the Honda production model.” With it all said and done, it’s the Honda’s agility and flexibility that really impresses the boys. “Due to our consistent lightweight construction, the wide handlebars and the few horsepower extra performance, these two trackers are just so much fun. Their handling is excellent and their brakes perform extremely well with their weight reduction. We all were amazed at how playfully easy motorcycling can be. Riding them always puts a smile on our faces.”