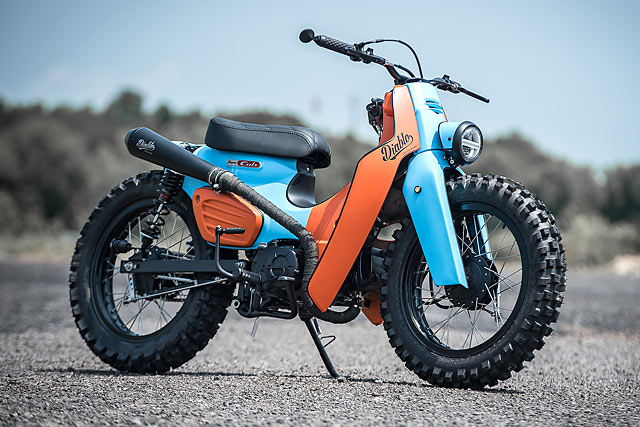 Then ‘Joey Boy,’ the Thai Rap superstar, told local custom shop K-Speed what he wanted. “Can you build me a Honda Super Cub scrambler?” he asked? A friend of the shop and a coach on Thailand’s own ‘The Voice’ reality TV series, Joey had seen a previous K-Speed Super Cub build and had set his mind on an off-road version. Being a fan of the outdoors and a big motocross nut, it made sense. Well, kind of. Needless to say, what the Thai Rap Superstar wants, the Thai Rap Superstar gets, and Joey got this very cool, very ‘out-of-the-box’ 2018 Super Cub. I swear, some days these stories just write themselves. Asked to help launch the new 2018 Cub locally by Honda Thailand, the previous K-Speed Super Cub build that Joey had spotted was the result of that rather fruitful shop/brand collaboration. And as if that wasn’t reward enough it’s also resulted in this, a second (and arguably more innovative) Cub build. It’s also interesting to note Honda’s new-found enthusiasm for the custom scene, both with the cub and for bikes like their new CMX range. Better late than never, we say. And don’t go turning your nose up at the good ol’ underbone Cub, either. While we’re not expecting it to steal any thunder from the CB’s long and proud custom history, the 2018 range would probably find its way into your garage and under your butt if you happened to end up in any large South East Asia city for an extended stint. When it comes to taking on the region’s insane traffic with a little style, it’s hard to beat. Don’t believe me? Then check out Honda’s 2018 Commemorative Edition Cub. Nice, huh? “We started with a 2018 Super Cub 110i model,” says shop owner, Eak. “This bike is a bit different from the road-going version that I built in January. It uses the same frame, but we chopped the rear, swapped out all the instruments, relocated the headlight, and create some new tracker-style ’bars with fresh brake and clutch levers.” And while Eak’s donor bikes usually retain their stock engines, Joey’s request for more power saw this Cub undergo some power mods to allow it a little more go once it hits the dirt. “These engine mods included a bigger piston, a 125cc Honda injection module and a change from auto clutch to a manual one. And getting the spins to the ground are some Champion Enduro 17 x 2.50 dirt boots. Next, Eak looked at the exhaust, noting that for it to work properly, it had to be high enough for the scrambler’s rider not to be worried about bottoming out.  “So for this version, I’ve raised the suspension system higher than the original one and placed the pipes higher up as well.” The other major undertaking on the Honda build was the front fork covers. With lessons learnt from his non-scrambled Cub, which also had a set of covered front forks, Eak looked to up his fab game on this build with something even more bold. The result is the beautiful forks you see here, which clearly make the build. As a final step, Eak took to the bike’s fairing to pair it down to something a little more sporty before laying down some paint. “While I always go for black on black, Joey insisted on a matte blue and orange color scheme.”

[superquote]“With lessons learnt from his non-scrambled Cub, Eak looked to up his fab game on this build with something even more bold.”[/superquote] Those with your good eyes on will no doubt have noticed the ‘Diablo Custom Works’ branding on the bike. With K-Speed’s stock-in-trade being aftermarket bike accessories, ‘Diablo’ is the brand name under which they sell their own, rather cool accessories. Note the bike’s new Diablo pipe, indicators, brake light and ‘air intake’ side panels. Other fresh tidbits on the scrambler include a new set of Thai OKD shocks, some Biltwell grips and a new all-in-one speedo that’s been moved down to beneath the bars. “Looking at it now, I like the dirt tires and exhaust the best. I think it’s a good combination with this Honda.” And if by ‘good,’ he means ‘so far out of the box, you can’t see the box anymore,’ then we’re inclined to agree. Let’s hope this isn’t the last out-there Joey Boy and K-Speed project we see.