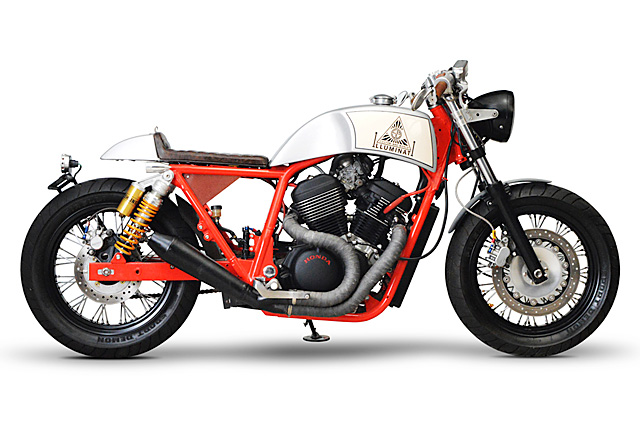 The French Revolution. JFK’s assassination. 911. UFOs. Satanic worship. The Illuminati, that pesky Bavarian secret society that apparently controls the world, gets collared with the rap for a heap of historical events – both good and bad. If you believe the hype, then you’ll know that they are even able to control the weather. But here’s something that I bet you never expected from them – a sweet-assed custom bike. Is there nothing they can’t do? Either that, or there’s a new shop in Thailand that has managed to customise a VRX400 and turn it into an amazing bike to launch their shop and named it the ‘Illuminati’. It’s hard to believe, we know. But just suspend your disbelief and go with it. If we make them happy, I’m going see if they can make sure it doesn’t rain this Sunday. Custom Bike World is a custom shop that’ll be officially open for business next month. But, luckily for us, here’s something that they prepared earlier. The shop, located in Sriracha, Chonburi, Thailand is owned by a music producer called Atip Krairit. And to say he likes custom motorcycles is probably a like saying the Titanic likes icebergs. His passion saw him start to design bikes in his spare time. After a few positive comments, he took the plunge and decided to get some friends that had a motorcycle shop to help him bring some of his ideas to life.

Driven by his need to create and his love of riding, Atip became obsessed with custom designs and decided to try to raise the bar a little for Thai custom bikes. But unlike many Western cities, Sriracha (yes, yes – they also make the hot sauce there) has a distinct lack of a custom scene. And no fans means no help, too. Enter ‘the internet’, stage left. Atip buried himself in pixels (ours included) and came out the other side with a head full of big, crazy ideas and a fire in his belly that would become the Custom Bike World shop. The first cab off the rank for the shop is this Honda VRX400. Purchased from a Thai ‘used chopper website’ (used Thai choppers – the mind boggles…) the bike was in decent enough condition, but not exactly to Atip’s likings. Then he had the idea to cafe it; no complaints from us, then. And 8 months later almost to the day, here’s the finished product. The boys took to their mouses and designed the whole thing in Photoshop first. Once they liked what they saw, they rode to Bangkok to find a metal shop with the skills and equipment to build the gas tank and the rear section to match their design. While they plan to do this in-house in the future, their embryonic state mean that they were best to call in the big guns this time. Then, while waiting for the parts to be completed, they started to strip the bike, cut the frame, rebuilt the engine and generally de-chopperise the bike in preparation for its new look. Next came the new colours. The frame, engine and wheels were taken to the local powder coating shop in Pattaya and made like new. With the gas tank and the tail-piece now back from fabrication, they took both parts to the colour shop and had them painted with the designs they’d dreamt up on-screen. And a rather excellent piece of leather they had obtained while in Bangkok was sent to the local furniture maker for sewing and stuffing. The other minutiae of the build include a complete engine rebuild, a full complement of polished aluminum parts and chroming throughout, Some Pirelli Sport Demon bags, respoked wheels, rebuilt carbs, front forks and the ever-popular 2 into 1 megaphone exhaust. Finally, everything was ready. In an epic late-nighter, they we put it all together and added the finishing touches, including the indicators, head and break lights, and an always-welcome set of Sweden’s finest; the Ohlins oily springers. And in a nice moved aimed at building the lily, a GPS tracker, alarm system, and battery charger were added to make life just that little more comfy. If you like what you peep, rest assured that the shop currently have some new bikes on the blocks and are also setting up to both service ride-ins and sell spare parts out of their Sriracha man/woman cave. Time for a Thai holiday, maybe?