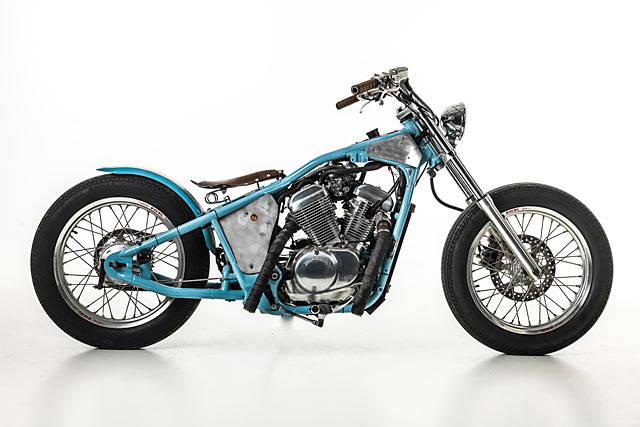 BarnBuiltBikes are a working man’s motorcycle shop. They repair and service every kind of marque imaginable. From scooters to classic motorcycles, the three-man team of Derek, Bart and Sven keep all sorts of oddities on the road in their native Belgium. But every few months they turn out a tidy little custom ride. Bikes like this, a Honda VT600 Shadow boardtracker. 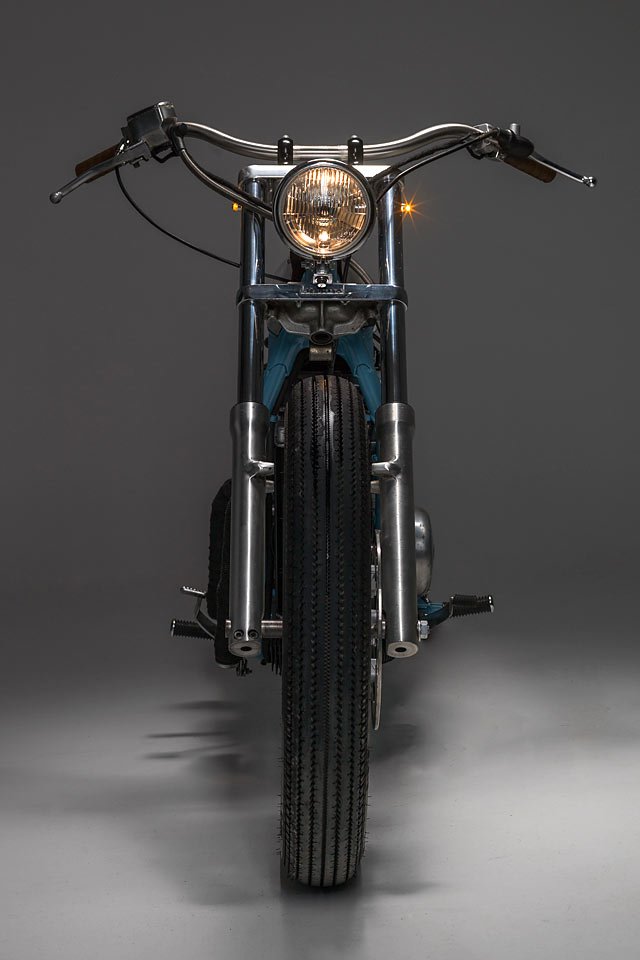 “The bike was owned by a customer who’d already had it a few years without really riding it,” explains Sven Decoux, founder and head honcho of BarnBuilt. “He wanted us to make it into something special”. But the team at BarnBuilt didn’t want to take the easy way out, even with a ride as rarely tackled as a middleweight Japanese cruiser. 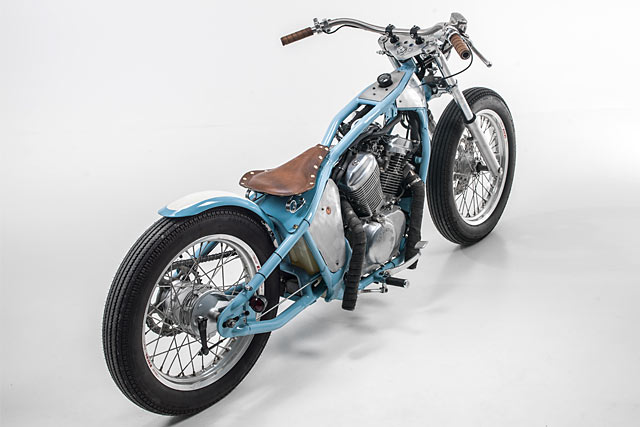 “First there was an idea of a bobber,” Sven says, “but to me it wasn’t special enough. We told the customer that if we could fit a fuel tank under the seat the shape of the bike would be straighter and the whole engine would be visible and not covered by a fuel tank”. See where they’re going? A 20’s era boardtracker. 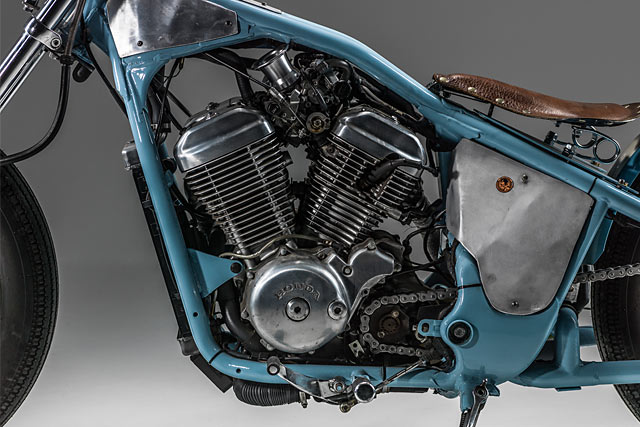 And to help them along Sven and the gang then turned to The Art of The Motorcycle – a book chronicling a Guggenheim exhibition on the development of the motorcycle. Flicking through the book Sven became enamoured with 20’s Indians and Flying Merkels and wanted to build the Shadow into something similar. “We needed to build it slim and light,” he says. 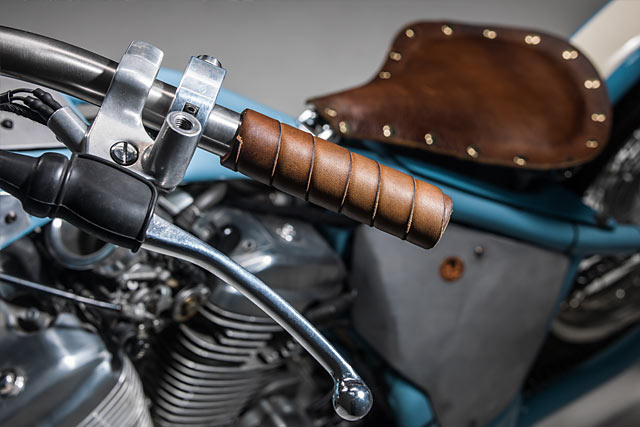 But before BarnBuilt bought out the grinders they made a subtle, but important change to the VT600. The standard cruiser runs a dizzying pattern of spokes at the front and rear. After a hell of a lot of effort they sourced a pair of Honda Transalp hubs that would visually lighten the wheels. 19” Excel rims were laced to them and a pair of Shinko tires fitted. 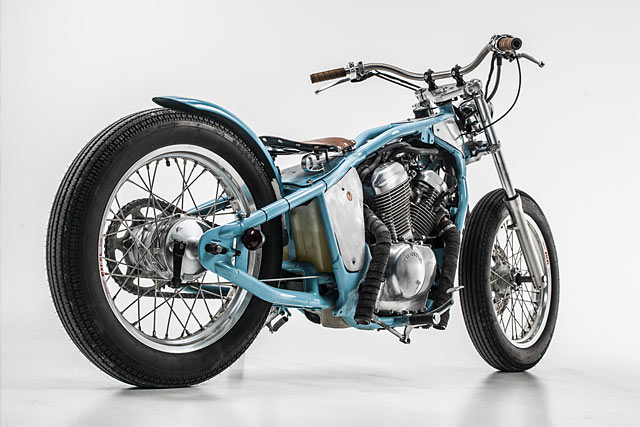 But then came the real work – the hidden fuel tank. The Shadow comes with a fuel pump as standard, so it’s possible to mount the fuel tank below the carbs. But that tank ended up being the hardest part of the build, with the team trying a host of different options before settling one used for kart racing. There’s all sorts of aluminum layers going on inside, stuffing the electronics out of the way.

[superquote]“But then came the real work – the hidden fuel tank.”[/superquote]

The electronics come via MotoGadget, with the usual array of M-Unit, M-Lock and M-Switches keeping things looking M-sleek. Handlebars come via BAAK Motocyclettes and seat and grips completed by a local leather shop JVS. Underneath, BarnBuilt also moved the footpegs to a allow for a more upright seating position, far more in line with an original board tracker. 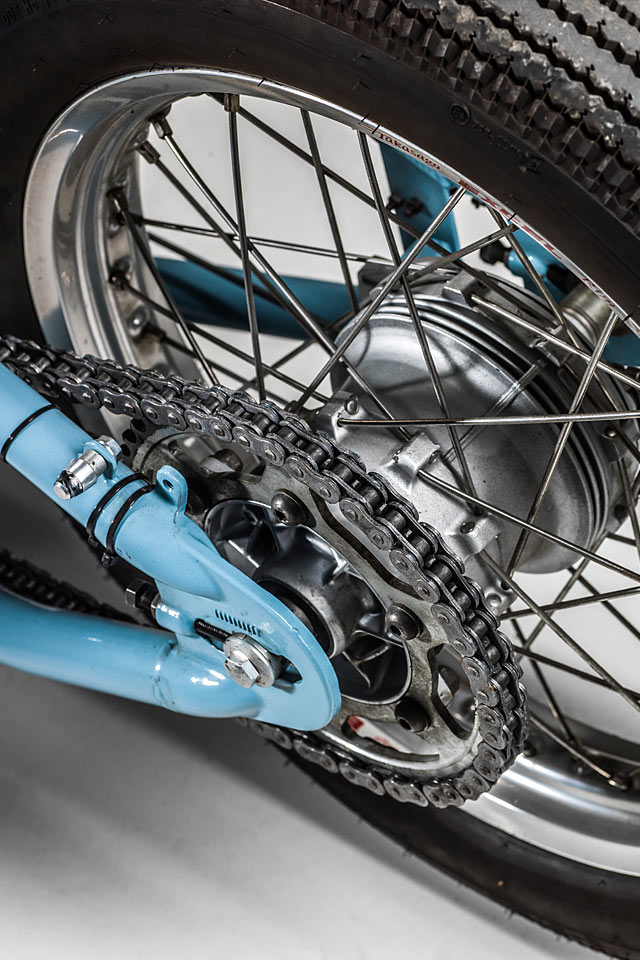 So what’s it like to ride the BarnBuilt VT600? “It feels very, very light,” Sven says. “There’s no fuel tank between your legs; the first fifteen metres are really strange and you just want to stare at the velocity stacks. And the sound you get from them is really cool. Riding on the freeway at 100km/h is really comfortable too.”

The end result of all that trimming and visual lightening is a bike that looks far more boardtracker-ish than any middleweight Japanese cruiser has any right to, helped along by paint laid down by local shop Tielemans. And man, does the end result turn heads. “At the lights people are always stopping and asking them what it is,” Sven says. We here at Pipeburn know exactly what it is – it’s rad.