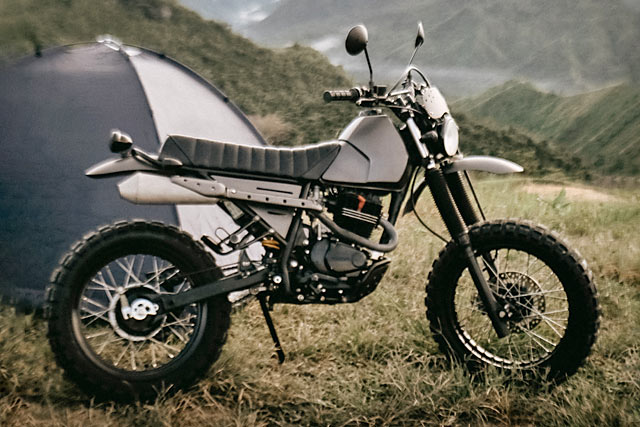 Being the custom bike freaks that we all are, it’s easy to forget that it’s not always about the bike. Sometimes it’s that perfect combination of bike, landscape, and weather that just comes together to make those bucket list moments you’ll be smiling about in your final hours. It’s not about the bike being king of the hill and tearing up all it surveys. Rather, it’s about the right tool for the job. Something that’s working together in harmony with everything else to deliver that perfect moto moment. Manila’s Erickson Bautista knows all about these moments. And by the looks of it, so does his Honda XR200.

“I’m very passionate about most things with 2 wheels,” Says Eric in opening. “I have two enduros, this XR, a 125XL and also a Honda Cub. Besides that, there are three bicycles. I love the outdoors: camping, bike camping and especially moto camping. I’m rebuilding my house right now so I can have a bigger garage. I’m also an apprentice with Manila’s Tokwa Party Garage to improve my fabrication skills.” Here’s a guy with his priorities very well sorted. 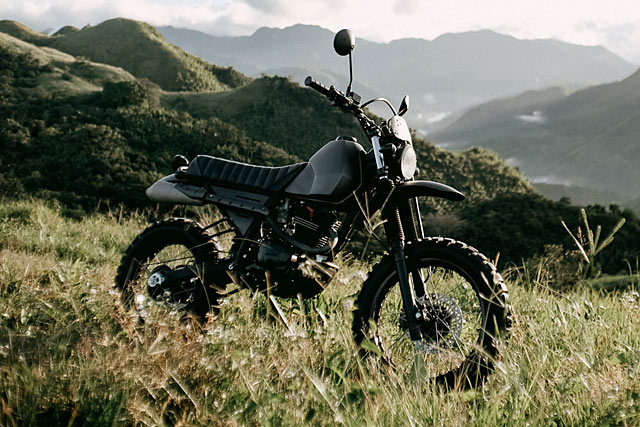 Eric says he likes to think of the bike as a kind of scrambler and adventure crossover. Starting with an online purchase of a 2011 Honda XR200 that had 14,000 kms on the clock, he notes that the bike was discontinued by the time he’d made up his mind to use the model as his donor bike. 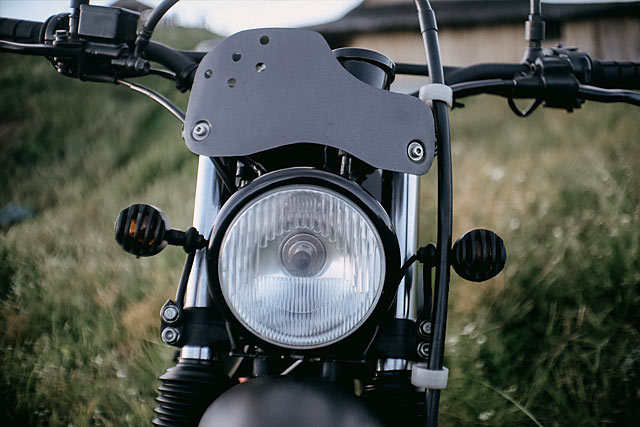 With the base bike sorted, Eric began researching suitable styles for his off-road dream machine. “The inspiration came pretty quickly,” he notes. “It was the guys from Indonesia’s Deus Temple and their ‘Lombok Rumble’ video that pointed me in the right direction. I wanted it to look classic. I also wanted something that could do well on the back roads and on a long ride, too.” 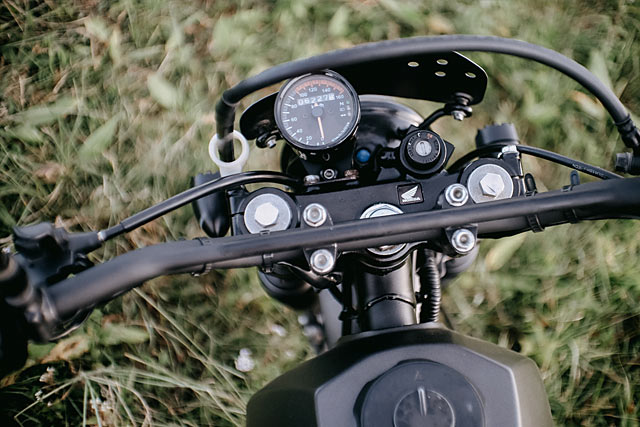 “I designed it specifically so it would not look like any other custom enduro here in Manila. Put simply, I remodelled the gas tank, added chunky tires, a subframe loop, a fatter seat and the new exhaust. But first would be the subframe mods. I was referred to a local fabricator by my friend who owns a shop called PJ Bonza. He was also kind enough to guide me through the rest of the building process.”

[superquote]“I designed it specifically so it would not look like any other custom enduro here in Manila.”[/superquote] 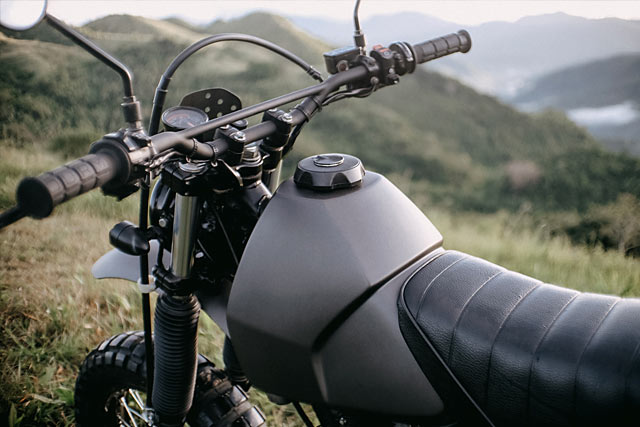 It took Eric four months to finish the new subframe, panels, gas tank and the fenders. “Then I took the bike to a local muffler builder for the upswept exhaust. It takes its cues from a modern motocross muffler. Finally, I took it to MotoZap to paint it in the gun metal grey and a black you see here. PJ Bonza also did the assembly for the engine, electricals and the wheels.” 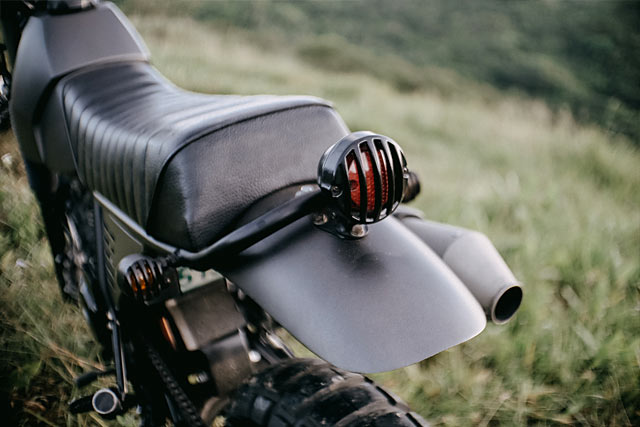 “As a new builder, it was the fabrication that took the longest, as I was looking for the best possible line from the gas tank to the seat. Of course, this also involved a great-looking gas tank as well. My main aim here was to make it look very distinctive and original.” We’re pretty sure he’s hit the mark, too. 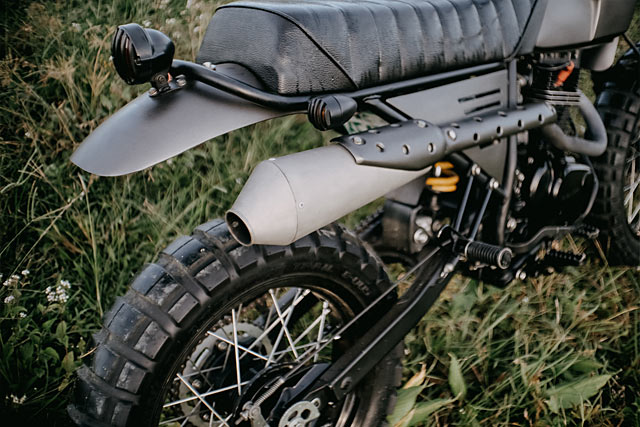 In the end, it appears that Eric has built a kind of Swiss Army Knife bike. “I love that I can ride this scrambler anywhere. As you may know, Manila’s heavy traffic makes it somewhat of an urban jungle, but the bike loves it. It’s also great for the back roads and I’ve even managed some river crossings and memorable camping trips on it. It’s also makes a big splash at a custom build show.” No doubt. 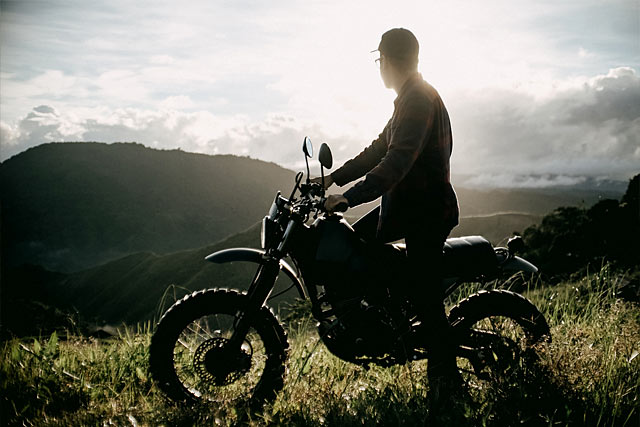