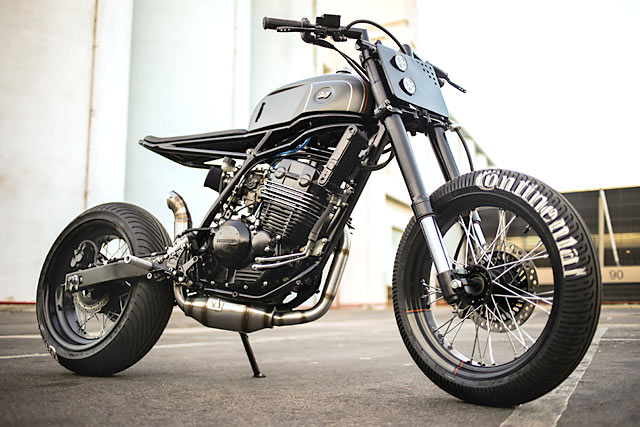 Now we all agree that peaky inline fours and huge rumbling v-twins are fantastic. But some of our favourite bikes to come out of the custom scene are small, fun little runabouts that can belt through traffic and jump gutters and terrify pedestrians. Reigning champions of South America’s bike building scene, Argentina’s Lucky Customs, have embraced these pequéna motos and turned out a fantastic little Honda XR250 tracker they’ve dubbed the ‘Cobra II’. Why the Cobra II? Well, it’s the second of a similar tracker theme produced by the Córdoba-based workshop. The first, which was produced at the end of 2017, was such a success they’ve decided to build a run of the things for the local market in Argentina. The Cobra II is their second tilt at this style of bike and it’s every bit as gorgeous as the first.

One of the reasons they’ve dirtied their hands on another Honda XR250 is because of its popularity in Argentina, where it’s deceptively named the ‘Tornado’. The bullet-proof evergreen single is a staple of the motorcycle scene there, offering good performance in a package so indestructible it’d make a black box look fragile. But while the XR might be reliable, it’s ugly. Oh so ugly. It’s lines are a mix of 90’s dirtbike with… well, 90’s dirtbike. So to get the Cobra II looking as incredible as this tracker, the team start by stripping apart the whole bike in their shop. Practically the whole thing comes apart. That’s the engine, frame and all the various plastic panels and electrics. And then the team, headed by the enigmatic Lucas Layum, go about sorting the wheels. Which isn’t easy. Lucas based the tyre dimensions on the little Cobra II on the Honda CBR1000 – a motorcycle a damn sight heavier and a whole lot faster than the Tornado. At the pointy end of things a swap to USD forks helps run the huge front wheel. But at the rear the swingarm has to be cut and extended to accommodate the mammoth 180/55/17 back end. ‘Once we’ve got all that together,’ Lucas says, ‘we’ve got the final height of the tracker and all the lines parallel to the ground’. Then Lucky Customs fabricate the fuel tank, a tidy rounded little number with one of the neatest little recessed fuel gauges you’ll ever see. Around the same time the crew also start work on the stainless steel exhaust, which, after it’s midpoint baffles, arcs up like a cobra at the rear. A Cobra, geddit? Then the team takes a step back, looks at the lines of the tracker to make sure it’s all looking harmonious and then everything comes apart again for paint. The engine gets painted black and then the body work goes in for a lick of colour, which is finished in an amazing series of satin greys and blacks with just a hint of a orange detailing. Then the whole bike gets reassembled, and the electrics installed. A simple little bike like this is largely free of modern electronic witchcraft, so modifications to the wiring aren’t too extensive. But Lucky Customs still don’t take the easy route. An LED brake light and indicator strip is installed at the rear of the frame as well as a new speedo, bespoke headlight and mount and new switchgear. They’re all little touches that push the Cobra II well into an area of premium fit and finish.

And god-damn does it look good. There’s something so cheerful and fun about a sub-250cc bike, stripped of all parts and pretensions. And it’s no surprise that the team at Lucky Customs have more Hondas trackers planned. ‘I’m receiving many more orders to make new Cobras,’ Lucas says. ‘It’s an economical motorbike and the final design is very good. Each time we make one it’ll get quicker. We finished this in six weeks!’ Watch this space in another six weeks then!