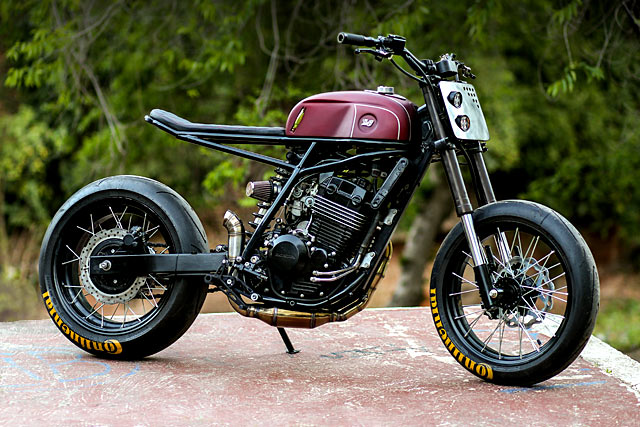 ‘Chuckable’. It’s what we call bikes in England and Down Under that are super easy to throw around on the road. You might call them lithe, lightweight or manoeuvrable. It’s what you get when you start with something that’s already pretty minimal and push it even further. Like whittling a toothpick or stripping back a Dylan song. And if being chuckable was something you could measure, we’re pretty sure that Argentina’s new ‘Cobra’ Honda XR250 would take first prize. “This is the fifty-seventh Lucky Custom’s project,” says shop owner Lucas Layum, nonchalantly. Damn, that’s a lot of customs. “We opted for a brand new bike to avoid any mechanical worries. We also chose something easily available locally, as we are planning to do a small run of bikes in this style. Yes we still love large displacement customs, but sometimes they are just too expensive for everyone to afford. The XR is very popular throughout Latin America. In fact, they are made locally in Brazil and are called Honda Tornados”. Lucas says the basic idea was to mix two styles; a tracker and a motard. At least, that’s the way this beast seemed to want to go. The first step in the build was to lace up two wheels that were based on the dimensions of a CBR1000: 180/55/17 out back and 120/70/17 up front. “The weave of spokes takes the rim from outside and not from the center, like they do with the factory BMWs”. Of course, such a drastic change to the bike’s hoops didn’t come easy. The swingarm had to be widened and the final drive sprocket and frame were modified to stop the chain rubbing on things it shouldn’t have. Similarly, the front forks and triples were heavily reworked for the new tsunami of rubber it now had to accommodate. “The fuel tank is completely handmade and was inspired by the metalwork of Argentina’s Zanella motorcycles from the 1960s. The chassis follows the fuel tank’s silhouette; the tank’s also been fitted with a fuel sightglass”. Taking inspiration from a previous build, Lucas installed some electrical boxes that blend into the bike’s middle section by mimicking heat sinks or cooling fins. They are in fact just a very clever way of hiding the bike’s battery and fuses. “As we were building to a budget, the engine is mostly the same as when it left the factory. But there’s been many other mods, including a new exhaust made entirely of stainless steel with a de-deafening chamber placed directly under the bike. And it’s all fed by a new K&N high flow air filter”. The bespoke stacked headlights are LED items and the ‘bars are Californian ProTapers designed for quad bike use. Lucas says he liked them because they are noticeably thicker than ordinary bars, making the task of installing the internal wiring and throttle cables much easier. “The levers and pegs are all aluminium competition items and the paint is a three-coat job with a semi-satin finish”. But what was his main goal for the rebuild? What was the one thing he was really driving for? “What I always look for in my work is to do something that has not been seen before. These days, the internet and globalisation tend to unify things and now everything looks more or less the same, so I always try very hard to think of something that’s clearly different”.

Once it was ready for delivery, the Lucky Customs team stood back and decided to christen the project “Cobra”; no doubt the bike’s charismatic litheness and speed had something to do with the new name. “This won’t be the last,” says Lucas. “It’s just the first of several more in different colours that will be leaving the workshop in 2018”. Shut up and take our dinero.